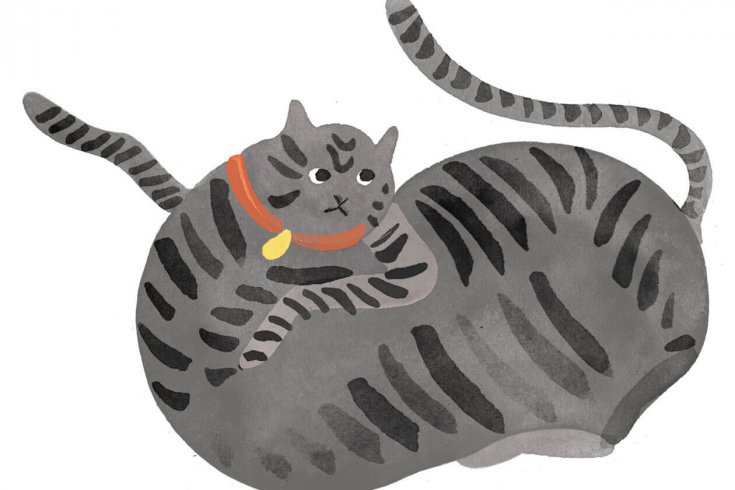 Heidi’s size always provokes a gasp from visitors as she lumbers into my parents’ kitchen, a gentle enormity looking up at us. She has no self-consciousness about her weight. There is simply the question of whether the food cupboard will be opened, which she asks with an inquiring look. She does not often meow.

Most humans react the same way: first with a yelp of surprise, then some attempt to describe her—she’s a raccoon, a seal struggling on the shore—followed by a long, hearty laugh. I have seen Heidi many times since she came into our family around 2008, and on my trips home to British Columbia there is always that moment of rediscovery: this is the house cat who eats like a lion.

Heidi is the last of a long line of cats and dogs my parents adopted from the local SPCA after they retired. Whatever losses these animals had endured in the past, they all won the pet lottery with my parents, who treated them like the grandchildren they don’t have. The dogs went on daily, leashless hikes in the mountains, were fed human-grade food, and were never left bored and alone.

None of these pets were ever fat. But Heidi was different from the first. My mother says the terrified kitten was near starvation when she was found in a barn nearby. Released from her carrier, she hid, only gradually to emerge from under the bed over a few months—thus the name Hide-ey, Heidi, which my mom sang to her with affection.

And she began to eat. Initial celebration over Heidi’s weight gain soon switched to a regimen of trips to the vet and diet food. My parents were somewhat embarrassed by her girth and the lack of care it seemed to signal.

My mother was empathetic with Heidi’s snack requests at first. Orphaned in Ireland as a child in the ’40s, my mom often told of the single egg she had been allotted on Sundays; an orange was the grandest of all Christmas presents. My father perhaps understood as well, having been a teenager in northern Saskatchewan during the Great Depression. In some ways, Heidi reflected my family’s relationship with hunger, even if the rest of us were slim.

Heidi always appeared to be as healthy and active as a cat her size could be, patrolling the fenced backyard several times a day (though she stopped to rest every few dozen metres). My parents thought she’d found a secret stash of food. I wondered if she was just genetically different.

This past summer, when dementia suddenly ended my parents’ ability to live independently, our lives changed almost overnight. One night, I was up late and faced a long, lonely stretch of work—packing bags for my parents (who were eventually moved into a long-term facility, to “complex care”) and my suitcase for the plane back east, and readying the house for their absence.

Heidi was too big to follow me from room to room. She chose a central location and lolled there on her side, watching me.

I was afraid for her—we didn’t yet know whether we could find her a good home, and a long flight didn’t seem wise—and stopped to pet her often. Her purr had the rumble of an oncoming freight train.

During one such session, maybe 2 a.m., I was cooing, “You big rug, you sweetie kitty,” rubbing that large expanse of her tummy. Tears came at the sudden change in all our lives, at whatever was to come.

To my surprise, she reached out to bat at the pearl I usually wear around my neck. It was the gentlest of inquiries, and she was asking to play. I took it off, and for a few minutes, she explored its relationship with gravity and how it tasted.

All her life, Heidi had been shy of petting and cuddling; people were cautious with her. But this moment reminded me that she enjoyed affection just as much as any other cat.

She was soon adopted by an elderly couple—the kindest people I know. But a few weeks later, we found out that she had inexplicably died. Alongside grief, a sense of failure. I wish I could tell her, I wish she had known: Heidi, you are beloved.

Patti Sonntag is the director of the Institute for Investigative Journalism at Concordia University. Her work has been published in the New York Times, the Toronto Star, the National Observer, and the Globe and Mail.
Tallulah Fontaine