Thank You, Alison Gordon | The Walrus
Skip to content 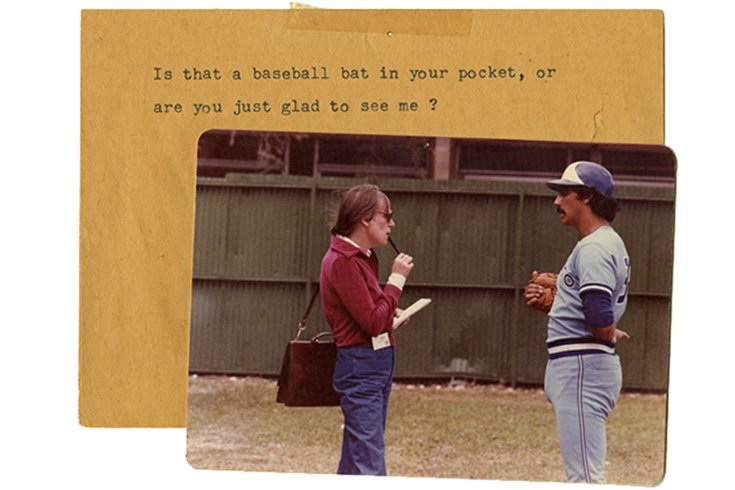 Perhaps naively, I jumped at the chance without really thinking about the consequences. Had I known then what I now know about the nature of the sport and about the men who play it, manage it, and report on it, I might not have been so quick to sign on, so I thank my ignorance. Had timidity won out, or good sense prevailed, I would have missed meeting a raft of fascinating people.

I never had a chance to meet Alison Gordon, but I’ve been thinking a lot about her over the last few years.

I thought about her when I started writing about baseball, consumed by the nagging false doubt that I had “no right” to do so. I thought about her during my first baseball scrum, as I nervously thrusted my tape recorder toward Blue Jays outfielder Jose Bautista while being bounced around by a throng of male reporters. I thought about her when I received a defensive, expletive-filled email (nine f-words, and one s-word) from a sports-event organizer after I publicly suggested he consider more diversity on his all-white, all-male panel.

I think about Gordon whenever I look at the home page lineup of Sportsnet’s “Insiders,” mostly white male faces reporting on subject matter that has a significant female audience. I think about her when I’m patronizingly marketed Hello Kitty and Victoria’s Secret baseball merchandise, baseball-themed nail polish, or forced to watch an all-female dance troupe perform in short skirts for the crowd at Toronto’s Rogers Centre. I think about her whenever it feels too hard, too tiring, or too hopeless to be a part of the sports conversation—to endure the sexism it breeds. I then remind myself that Gordon weathered so much more, so much worse, and by all reports, with a smile on her face.

Gordon died unexpectedly last Thursday morning, at the age of seventy-two, after surgery for a lung condition. She was beloved and revered by everyone who knew her, and by many who didn’t. When I tentatively started writing about baseball, some of her friends said to me, “Have you met Alison Gordon yet? You have to meet Alison.” She was the first female American League beat writer, and given how challenging it is to be a female sportswriter even today, that was no small feat more than thirty years ago.

Born in New York, Gordon spent some of her childhood in places like Tokyo, Cairo, and Rome because her Canadian father worked for the UN. She attended Queen’s University in Kingston, Ontario, but left before she completed her degree, going on to work for Pierre Elliot Trudeau, and sitting at the foot of John and Yoko’s bed at their Montreal bed-in for peace. Gordon’s sportswriting career really took off in 1979, when she was assigned the daunting (and male-dominated) task of covering the fledgling Toronto Blue Jays. By all accounts—including her own—she was thick-skinned and relentless in the face of myriad forms of abuse, either from people (i.e., men) perplexed by her presence, or offended by her “audacity” to set foot in an all-boy’s club. Her Baseball Writers Association of America card—the first ever issued to a woman—famously read “Mr. Alison Gordon,” simply because there was no option for anything else.

“I didn’t start the job with any stirring sense of historic destiny,” Gordon wrote in 1984:

I was no brave pioneer on feminism’s cutting edge. I was just another scared rookie on the way to my first spring training, playing a new game at which I would have to make up the rules. I wasn’t only new to baseball, I was new to newspapers, and there were more than several people waiting for me to fall on my face.

Alison Gordon deeply loved baseball and its human side until the day she died. She spent five years with the Jays, enduring protests against letting a woman into the locker room “on religious grounds,” verbal objections that the clubhouse should be maintained as a man’s domain, and all the expected offensive remarks and obscene gestures. There were attempts to intimidate and insult her; sometimes the fact she was a woman got more attention than the game itself. She once received a letter, after her first season, that read, “Madam—I see where you don’t seem to mind male nudity in athletes shower rooms at sports arenas. Well, neither would any whore.” But still Gordon found the will to go to work and do her job well for four more seasons. When it was over, she published Foul Balls: Five Years in the American League, a book that unabashedly recounts the trials of being a lone woman in an aggressively male arena, and won a National Newspaper Award citation for her work.

Being off the beat didn’t mean that she abandoned baseball writing, but instead she used her experience as fodder for five popular baseball mystery novels, the central character a crime-solving sports reporter. She also had musical interests: for the past decade, the Toronto rock band 3 Chord Johnny rehearsed in her basement, a regular Wednesday evening get-together that, according to members, was as much about “the hang” as it was about the music. Gordon presided over the kitchen table they congregated at, usually offering her superb guacamole.

“Alison was a feisty, funny, smart, sometimes testy, always thoughtful woman,” says band member, friend, and writer David Hayes. “Her sense of humour could fairly be called ‘salty,’ I’d say. I doubt I even scratched the surface of knowing everything about the incredible experiences she had throughout her life.”

It would seem Gordon’s saltiness and sense of humour served her well in enduring the jabs of being a woman in sports. It’s been more than three decades since she bravely made her mark, and broad strides have been made since, yet pervasive sexism still exists in the sports world. What that environment does to a writer’s psyche, and how it sullies the thing you love, is hard to explain to someone who hasn’t endured it—and what’s worse is there aren’t a lot of women with the freedom to publicly do so. Talking about the toxicity can put their coveted jobs at risk, and can lead to ejection from the community. In my short time writing about baseball, I’ve heard women speak in public about how “supportive and professional” colleagues and players are, and then privately tell sinister stories. I’ve been in conversations with young women breaking into sports media who have a list of gender-based grievances jaw-droppingly long and appalling. The harassment is anything from dick jokes to ass grabbing, from being invited by a player back to his hotel, to a personal favourite: “Do you even like sports? ” With every snide comment and behavioural infraction, women are either told to “take a joke” or accused of not being able to hack it.

One of the most important ways to create a better, more comfortable place for women in sports is to have more of them—their voices and their ideas—in the media. Whether they know it or not, the women who endure sports’ sexist trials are shifting things toward something better, more robust, and more inclusive for everyone. Not only are they battling daily to do and talk about what they love, they’re creating a safer and more welcoming atmosphere for the women who come after them, just like Gordon did in 1979. It’s an arduous but necessary process, applying not only to beat writers or TV personalities, but also to bloggers, tweeters, and any women who assert their fandom and say, “We’re allowed to be here.” And despite the slow evolution, it’s working.

About a week before Gordon died, Walrus publisher Shelley Ambrose walked into my office and casually handed me her tattered hardcover copy of Foul Balls. She knew of my rabid love of baseball, and asked if I’d ever met her trail-blazing friend. I told her I hadn’t, but said I’d love the chance to thank her for everything she’d done, and Shelley promised a meeting. Now I’ll never get that chance to express my gratitude to Gordon in person, but I can help continue the work that she started. She provided a model for carving out a vital space for women in sports, and relentlessly asserted that we deserve to be there, and that we deserve better. Even when it gets hard, hopeless, and daunting, I can wake up the next day and do it again, because that’s what Gordon would have done. That’s what Gordon did.

Pitchers and catchers report to spring training this week. It’s that highly anticipated, beautifully clichéd time of growth, change, and renewal, and it’s a shame Gordon will be missing it. As the boys of summer start throwing a ball around in southern diamonds, let’s write about and talk about and enjoy baseball, because that’s the best way to show how meaningful her work really was.