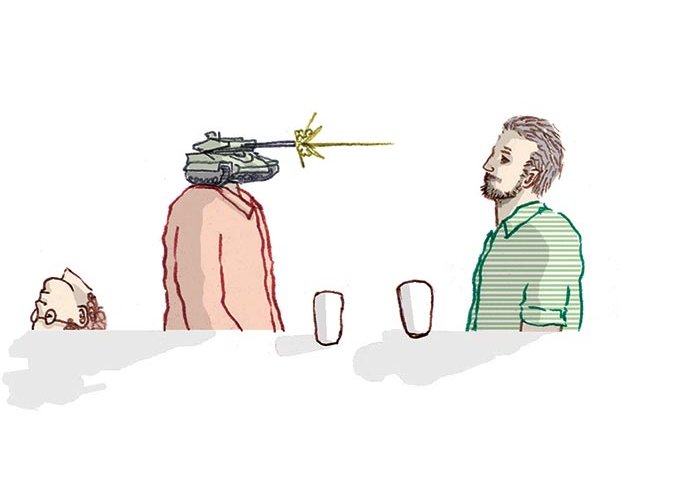 “Dunno. They just showed up.”

“Quite a few tanks, actually.”

“Isn’t it a Lanyard, or a Cotillion or something? ”

“Armoured Dragoon? Would that work? ”

“A Dragoon? Doesn’t sound very tankish to me.”

“What about a Division? ”

“A Division’s more than quite a few. Quite a lot more. In imperial measure it would be half a Redoubt. There’s not even enough of them for a Seconded Platoon.”

“What about a Light-something then? ”

“Always a possibility. But there have been complaints.”

“From, you know, who’s-it, the one between Fourth Brigadier and the Two-IC.”

“About all the Lights.”

“I beg your pardon. Did you say Squadron? ”

“What’s the matter with Squadron? ”

“Not a thing, mate. Not a thing. Why not Flotilla while you’re at it? ”

“But I keep telling you. They’re not in Airborne. They’re in apcs.”

“Only if they’re Sappers. Or Snipers. Or something.”

“Will you cut it out with Dragoons? ”

“How about a Brigade kind of thing? ”

“I don’t really see this in terms of Brigade.”

“I find Brigade a little on the sheep’s-lung-and-shortbread side of things. Don’t you? ”

“Possibly you’re thinking musical. The one with all the kilts.”

“Precisely my point. The last thing we need around here is more tartan.”

“So do I. Damned nuisance. Must have been that aide-de-camp.”

“Is it true what they say about your pecker falling off? ”

“Special Reserve Battalion. Not bad. Not bad at all. I like it. Oak casks? ”

“Yes. It has a certain je ne honi soit. Do they get colours with that? ”

“And a swagger stick. Plus a regimental dog.”

“The brass. For the ceremonial march. You know. Next to the woodwinds.”

“Once or twice. In my younger days. Schoolboy snogging. Nothing more.”

“So. Is this Artillery then? ”

“The quite-a-few tanks we’ve got to give a name to.”

“Whatever happened to the anonymous donation, I wonder.”

“The tanks. Men in bloody tanks.”

“How should I know? Do tanks have guns? ”

“Bengal Lancers would be out of the question, I suppose.”

“So you were saying. Quite a few of them, apparently.”

David Macfarlane is touring a play this summer entitled The Door You Came In, based on his Newfoundland family memoir, The Danger Tree.
Leif Parsons

Leif Parsons has contributed to the New York Times, Bloomberg Businessweek, and The Atlantic. 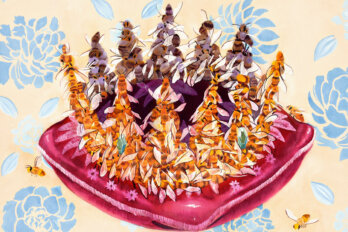