Taming of the Screw | The Walrus
Skip to content 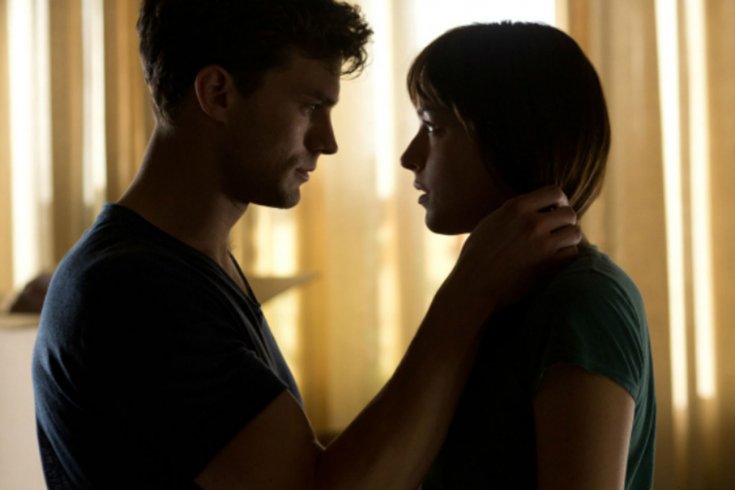 At the Toronto advance screening of Fifty Shades of Grey, excited moviegoers hoot and holler at the staff’s friendly request to “turn their phones to vibrate.” The theatre is packed: the crowd of 500-plus is about 90 percent female, with a smattering of boyfriends and husbands along for the ride. The woman seated to my right has made the four-hour trek south from Sudbury for the chance to see the adaptation of the bestselling book before anyone else. During the pre-screening trivia portion, one middle-aged woman stands up and proudly yells “Red room of pain!” as the correct answer to a question. This controversial franchise has at best been characterized as terribly written, and at worst the promotion of sexual abuse. Nonetheless, the general tone in the theatre suggests these women care more about seeing lead actor Jamie Dornan with his shirt off than anything else.

Works of fiction are about ideas. They’re not intended to “promote” agendas, but instead are vehicles of depiction, methods of exploring themes. I suppose the logical follow-up question is what is it exactly that Fifty Shades is exploring that has made it so popular? Given its incredible, near-hysterical success, it must be tapping into something very real amongst its rabid, primarily heterosexual female fanbase, even if that desire is, as the long tradition of the romance genre suggests, simply a need for fantasy and escapism.

You would likely assume that the unfulfilled fantasy in question would be kink, but after watching Sam Taylor-Johnson’s film adaptation (which, if you’re wondering, depicts lots of graphic sex) I’m not sure that’s necessarily the case. Fifty Shades the film actually reads a great deal more like a BDSM Bridget Jones’s Diary than The Story of O. Our female lead—Anastasia Steele, played by Dakota Johnson—is doe-eyed and a bit daffy, tripping over her own feet and lacking the sophistication and experience that is a staple of Christian Grey’s highly polished world. Ana fumbles with her words, drunk dials from a bar in the middle of the night, and literally vomits all over herself—yet still the chiseled tycoon is smitten. He floats her off in his helicopter, buys her a car and a computer, inexplicably makes her eat a muffin, and practically begs her to be his. (I’d also venture to guess that most of us didn’t artfully lose our virginity in a fit of frenzied pleasure to a sexually experienced, hard-bodied billionaire, so you can probably add that one to the fantasy list as well.)

Christian is the sad, brooding, misunderstood male archetype, with much of the film devoted to the idea that maybe Ana can change him. The unavailable man made available is yet another false fantasy, one that’s certainly not new in romance. He says he doesn’t “make love,” and then promptly does something with her that looks a lot like making love. He says he’s never slept next to a woman he’s been seeing, and then promptly dozes off by her side. He says he doesn’t do relationships, but there they are, making pancakes together. Nobody gets the inscrutable Mr. Grey like innocent Ana, a point that’s driven home when he finally reveals his famed play room—“Like, where you keep you Xbox and stuff? ”

When Ana gets the tour of his whips, blindfolds, restraints, and floggers, a generally stone-faced Dornan plays Christian as earnest and vulnerable, yearning to gain her acceptance of his dirty, misunderstood secret. From there their dynamic becomes more about the common refrain of relationship compromise than anything else. She doesn’t want to do this and he doesn’t want to do that, and together they are forced—and mostly fail—to find a happy medium. They have passive aggressive text conversations and abrupt goodbyes; their relationship pitfalls blossom more from a lack of communication than his love of kink.

Fifty Shades does of course have its issues, but sexual consent—at least by the standards of pop culture—is not one of them. Contrary to protests, Mr. Grey understands sexual boundaries better than most, and readily wants to discuss and clarify them. In fact the movie ends—however unsatisfactorily—on his immediate deference for the word “no.” Where Christian doesn’t get it is in his jealous impulses, and his nasty habit of creepily showing up without an invite when Ana’s out with friends, at work, or in her home. He not only intrudes on her visit with her mother, but criticizes her decision to have a second martini while he does so. Christian’s status as a controlling, stone-faced Dominant makes these intrusions much less endearing than, say, Lloyd Dobbler showing up on Diane Court’s lawn with a boombox while she’s sleeping.

The movie is certainly not about depicting a healthy relationship, but relying on entertainment to be appropriate, accurate, instructional, or ideologically sound is a sorely misplaced impulse. That’s not art’s purpose, nor should it be. Yet for whatever reason Fifty Shades has become an arena where we feel it’s fair game to police narrative, something that’s generally an agreed upon no-no for artistic expression. It could be because people think it’s not art but terrible fluff, but if that’s the case, why have we assigned terrible fluff so much power? Why do we assume it’s going to drive the women who adore it into abusive relationships and ill-advised BDSM scenarios? To me, blaming abuse on reading a book is akin to blaming a skirt length or one too many cocktails—it’s a misdirection that does no real good toward solving greater problems. Even worse, it assumes a stupidity on the part of its (largely female) audience, stripping them of their agency and their ability to freely participate in fantasy. I’d like to think that we can independently discern when movie characters are behaving badly, and this newly bolstered film version of Ana does a pretty good job of calling out Christian’s shenanigans before we even need to.

Fifty Shades is certainly not going to solve any of society’s ills, but I doubt it’s going to create any either. In succumbing to a knee-jerk reaction to demonize a work of fantasy and fiction, we deflect attention from where the real responsibility and accountability lies. It’s up to us to have the necessary conversations around consent and abuse, not to put the onus on a novel or film to educate. As Mr. Grey aptly puts it after Ms. Steele has welcomed her first blow from his riding crop, “See? Most of the fear is in your head.”