Taking Action against Bill C-51 | The Walrus
Skip to content 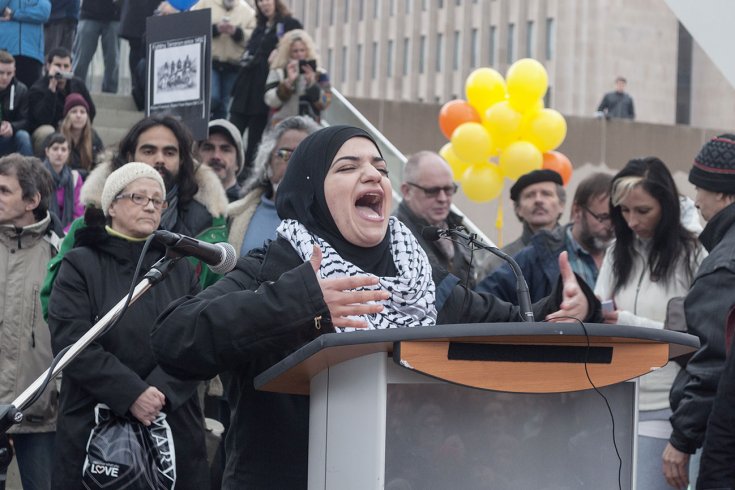 As more than a thousand people converged on Toronto’s Nathan Phillips Square on Saturday to condemn the federal government’s proposed anti-terror laws, a dense mist hung in the air and obscured the downtown skyline. The threat of a storm seemed all too appropriate for a gathering to warn Canadians about Bill C-51—a measure that would give the country’s intelligence and law enforcement agencies unprecedented powers and, in the opinion of many legal experts, challenge our most basic protections under the Charter of Rights and Freedoms.

Bill C-51 was introduced in late January amidst a national fog of fear regarding domestic and international terrorism. The killings of two Canadian soldiers only two days apart, both of which involved men whose actions the government described as “terrorist jihadist activities,” had the country on edge. Prime Minister Stephen Harper linked those attacks with Canada’s recent military engagement in Iraq to fight the Islamic State of Iraq and Syria, and promised to fight terrorists whom he claimed were influencing threats on Canadian soil. C-51 was presented, along with several other recent pieces of government anti-terror legislation, as a necessary tool to keep an increasingly besieged country safe.

A much-cited Angus Reid poll from February showed that more than eight in ten Canadians supported C-51. But since then, a steady chorus of academics, former intelligence officials, former prime ministers, and elected officials have been imploring the public to think twice about the proposed legislation. Many of them warn that under C-51, the Canadian Security Intelligence Service will be able to function as a secret police force that can detain civilians without proper evidence, and can define legal protest and dissent as unlawful terrorist activity.

The concern among some federal politicians is so grave that they are cooperating across party lines. Several NDP members of Parliament from the Toronto area shared the stage with Green Party leader Elizabeth May on Saturday—each camp noting the absence of Liberal MPs and leader Justin Trudeau, who has expressed concerns about C-51, but is supporting it in principle. “This is a defining moment for our political leaders to show who they are and what they stand for,” said NDP MP Andrew Cash, in a not-so-subtle reference to Trudeau. May was more direct in her appeal for a Liberal change of heart: “Justin Trudeau, come on down!”

Speakers from Indigenous and Muslim communities made strong cases that C-51 will hit them harder than the average Canadian: Mi’kmaq lawyer Pam Palmater flipped the script by calling Harper a “terrorist”; she warned that C-51 will criminalize legal dissent of Indigenous people on environmental and land claims issues. “First Nations people can count how many of us will die every year from the environmental terrorism that’s happening on  our territories,” said Palmater. “Welcome to our world—this is not a world we want to share with you.”

Palmater then gave way to seventeen-year-old spoken word artist Nasim Asgari, who electrified the audience with a poem about the current suspicion and fear of Muslim people in Canada. She mentioned common public situations in which Muslims are lectured, threatened, or simply shunned, before assuring the enraptured crowd, “And no, this is not another apology letter for crimes I have not committed.”

The opportunity for these women to describe life under Canada’s existing political and social reality, never mind the proposed new legislation, set a sober and solemn tone for the demonstration. It was a reminder that Canadians whom C-51 could most directly affect are struggling to be heard in the current debate. As May argued, “This bill has already violated Section 35 [of the Charter], the constitutional rights of First Nations, because there was no prior consultation.” Assembly of First Nations national chief Perry Belgrade made the identical case when testifying before a House of Commons committee on C-51 last week.

Protesters on Saturday waited out two hours of ceremony, song, and speeches before marching under police supervision through downtown and to a CSIS office. There, against the backdrop of the CN Tower, the rallying and speeches continued for another two hours. Organizers read excerpts from a speech by American journalist and Walrus contributor Chris Hedges, who had planned to address the gathering before being held up with plane trouble in Windsor.

Hedges, a war correspondent with an anti-capitalist philosophy, is well known for his weighty denouncements of state power. His speech warned that legislation similar to C-51 in the United States, including the now infamous Patriot Act that Congress approved in the wake of 9/11, had robbed civilians of their freedom in the name of national security.

“Any form of dissent, no matter how tepid, is soon to be blocked by an internal security apparatus, and powered by anti-terrorist laws that will outstrip anything dreamed of by the East German Nazi state, and no one in Washington or Ottawa intends to help you,” read a portion of Hedges’ speech. Although it isn’t clear how much of these truly ominous words Canadians will accept, Saturday’s nation-wide demonstrations—Toronto was one of fifty-six cities to host a rally—underscored the gravity of a country grappling with security, freedom, and the limitations of government power.