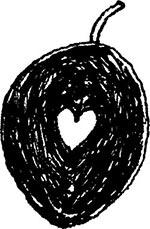 Iwas about seven years old, and it was summer. My mother was making squares for fellowship group at the church, and on the table there was an open bag of shredded coconut, which I had never seen before. “What’s this? ” I asked. “It’s coconut,” she said. “Can I have some? ” “Yes,” she said, “but it won’t make you fly.” Apparently when she was a kid, her older sisters had convinced her that if you ate enough coconut you’d be able to fly, and she had eaten so much she got sick, and then she got her head stuck in a milk can. Her skepticism didn’t deter me from trying, though, so I took the bag out on the front steps and started eating. I can’t believe how lucky I am, I thought to myself. Soon I’ll be flying.

After a few handfuls I went and stood in the driveway and waited for something to happen. I didn’t wave my arms or anything; I just stood there in my swimming trunks with my face turned straight up to the sky. I was astonished. The sky was so blue that I forgot what I was doing, and my mind started to wander. I hope I’ll be comfortable in my old age, I thought to myself.

Suddenly I realized that the ground was upside down, and I hadn’t fallen into the sky only because my feet were stuck to the ground. This was my big chance to fly, and someone had ruined it by gluing my Keds to the pavement. “I don’t know who you are,” I whispered. “But you’ll pay for this.”

This is the winter version of a story that takes place in the summer. It’s the story of my life, as experienced by other people. One day, for diverse reasons, I suddenly wanted to eat a plum. And so what do I do? Do I go to the grocery store and buy a plum and bring it home to eat it, like any normal, civilized person? Yes.

There I was, with my plum and all my other things: my extension cord, my VIC-20, my cheese grater, my UHU Stic, etc. On one hand I had my things, and on the other hand this plum, which was breathtakingly nice: round and purple, and above all, plump. I can’t believe how lucky I am, I thought to myself. Where had this plum come from? Where had my staggering good fortune come from? Was I living in some fantastical twenty-first-century golden age featuring plums as big as my fist and purple as heck? I was. This plum was going to turn my life around. Never had any plum been so ripe with expectations for the future. Standing in the kitchen, with the plum in my hand, I said out loud: “Plump plum!” It sounded like a heartbeat. The plum had taken over the duties of my heart. Plump plum.

Have you ever lived through a devastating personal tragedy? A fire, a coma, a heart attack? I never did find out who had glued my feet to the driveway, but I always suspected. Where did this plum come from? Do they grow plums around here? It was a plum of uncanny size: no doubt some maniacal, gene-splicing, hormone-shooting, pesticide-spraying Prometheus, some ruthless bucolic usurper of the gods, hell-bent on humongous fruit, had had a hand in this plum. It had cost $1.60 or some such mind-numbing sum. What am I doing? I panicked. What am I supposed to do with this plump plum?

It happened that quickly: in a heartbeat. Is eating this piece of fruit morally comparable to eating another piece of fruit? And what about… plastics? Should I use the hot-air dryer or the paper towels? Cruelty-free, or regular? How can I fight today’s economic and political trends? Things are getting pretty scary around here. Oh, instigator of invidious fisticuff showdowns. Oh sly mastermind of internecine squabbles, orchestrator of crafty rackets and outrageous blitzkrieg scams. Oh progenitor of disappointing joys!

My love for the plum had dissipated, and I was left standing in the kitchen with my heart in my hand. Then, for whatever reason, I put the plum in the icebox. I hadn’t consciously decided that I was saving the plum for breakfast, but I probably was. Maybe in the morning the plum would be delicious and cold. It seemed distinctly possible.

The next day I got up and went looking for the plum. It was still there. It occurred to me to ask, How is this a poem? More to the point, How is this a plum? I took a bite. I can see humanity from here, I thought to myself. Or at least, I can see parts of it.