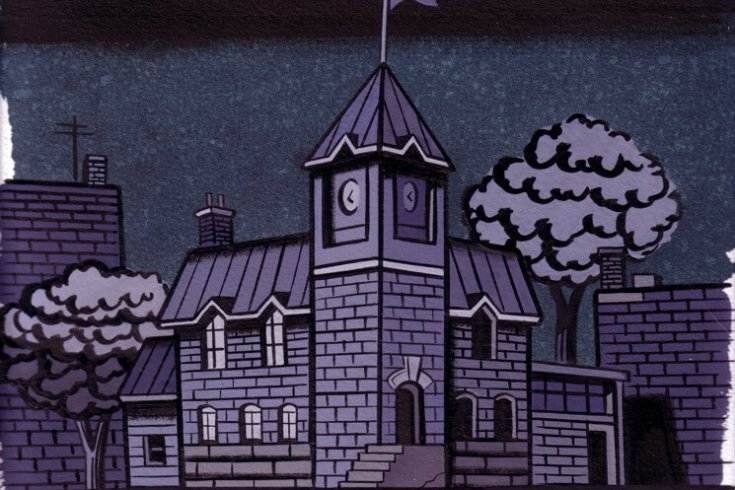 The last of our kind came into the city tonight. Flat-footed, paws curled into fists, snow on their fur, I saw them scrambling down the toboggan hills on their bottoms and their bellies.

We had divided Montreal into quadrants.

Su-na and I stayed here, testing the alleyways. Though we tipped bicycles and rolled the bins, no one shouted, no one came. The nighttime emptiness grew larger.

We began to walk proudly, holding our heads high. We chewed our way through Bernard and St-Urbain, flung stones at the lights. In the house where I was born, we clawed the wood back and wormed through a sunken window. Ice that had formed on my coat began to melt in the warmth, running down like bathwater. Shivering, I followed Su-na up to the last room. I ran my paws over everything, reckless now, bold, as if I were someone larger, Fat Lip or Hershey.

There was a great deal of paper. Su-na settled in a corner, covered herself in volumes and, fixated, began to shred them. This is why we used to tease her and call her Bird.

Against my face, the darkness was lustrous and cool. I went downstairs and sniffed the rooms, I climbed furniture, opened cupboard doors, turned the taps on, sampled the food in the fridge. I touched all the items in the closet. The disappeared people sat on the tip of my nose, as if all this time they had only been folded away. They perfumed down on me and I inhaled generations of fear, lust, sadness, dudgeon. I could hear Su-na sighing, ripping paper, mumbling to herself. I wrapped coloured cloths around my head and stumbled to the next room, where a television flickered. Images ran like moving clouds. Bombs, guns, running men, airplanes, ice. I touched the sharp pictures. The air in here tasted chalky and regretful.

Su-na emerged from her avalanche of paper and we climbed up through a window, swinging onto the roof. I was not unhappy. My many scarves, soft as water, trickled backwards in the wind. We looked down on the city, which had emptied so fast. The squirrels hurried by as if their lives depended on it, desperate to store all they could. But I could smell the future. The people were never coming back. We had inherited a crumbling borough that would inch by inch be nibbled down, laid to waste, devoured so that we too could raise our own paradise.

Not even children, Su-na said quietly.

Black crows trembled on the wires, fat and full of grace. I shouldn’t like to know what they were snacking on.

Down below, our people were crowding the streets. Celebratory, desultory, disbelieving. I saw Mad Moo with loaves of bread in his arms, his girl trailing behind, wearing a bagel crown. Our people unjammed the locks of cars, ignited them and zigged through the night. They climbed the viaducts and played like kit. Others, too, had ornamented themselves in cloth. Su-na said that one day the mountain itself would descend. It would unfold its evergreen body, sip the daylight dry, swell until it choked the streets.

But for now there was just Su-na and I, and the city that had been bequeathed to us. The powdery snow flickered down, wetting her eyes.

Don’t get cold, she said.

She saw how I trembled. I stood on the very edge of the roof. More creatures were arriving now, crawling from their dens. From the canine quadrant, I heard a jubilant, confused barking. Up here, beneath the arched moon, felines swung their hips. I groomed Su-na, and my touch left eddies on her snowy coat. The others were obsolete now. Gone to sea, the floating cities or the stars. We would mourn them and then, tomorrow, and for all the days allotted us, we would build the city anew.

Hours passed. I thought daylight should have come by now. Our people could not sleep. Snow fell harder. The lamps burned out. How many weeks went by like this? Down below, the streets grew rougher and the borders of the quadrants began to crack. Our people cried like kit. They fell into a frozen somnolence. Su-na and I hid ourselves in the avalanche of paper, waiting to fly, to be transfigured, to climb as the obsolete had done, crater the moon, and wash the ice off.