Standing Up for Charlie Hebdo | The Walrus
Skip to content 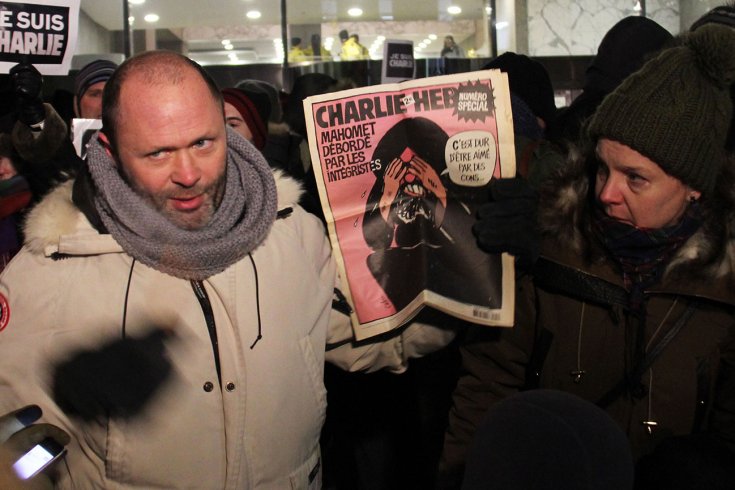 At the Toronto vigil, a man holds the February 9, 2006 edition of Charlie Hebdo, depicting the prophet Muhammad crying, with the headline: “Mohammed is overwhelmed by the fundamentalists.”

At Toronto’s vigil for the Paris terror attack, a man holds the February 9, 2006 edition of Charlie Hebdo, which depicts the prophet Muhammad crying, with the headline: “Mahomet débordé par les integristes” (“Muhammad is overwhelmed by the fundamentalists”).[/caption]

Shivering from the bitterly cold temperature, Florian Aucoin raises his left hand to his mouth, amplifying his voice: “Charlie!” he yells into a crowd in downtown Toronto. No one replies. Immediately, again: “Charlie!” A pause. One more time: “Charlie!”

It is a summons without a response. He wants people to shout back, “Présent!”—like a roll call—in a nod to the printed banners many are holding, “Je suis Charlie” (“I am Charlie”). Nobody gets his meaning. Defeated, he stops after about a dozen tries and laughs it off.

Aucoin is one of a couple hundred people, mostly young French expats like himself, gathered on the northeast corner of Yonge and Bloor streets, outside the city’s French consulate. This is Toronto’s vigil for the eight journalists from the satirical weekly French magazine, Charlie Hebdo, who were murdered yesterday in Paris. (A total of twelve people, including two policemen, were killed in the attack.) It is widely believed that Islamic extremists were behind the assault—one suspect has surrendered himself; French police are frantically searching for two others—infuriated by the publication’s cartoons depicting the prophet Muhammad.

“I’m sure every French person has a part of Charlie Hebdo inside, because we are—our humour, the French humour—is kind of sarcastic,” Aucoin tells me. “It’s known around the world, I think. When I arrived in Canada, I started with my French humour, and people don’t follow my humour—I was wondering what’s going on.”

Worldwide response to the Parisian attack has been unanimously vigilant—even Vladimir Putin called it a “cynical crime.” Prior to the Toronto vigil, one of its organizers, Florent Guérard, wrote to me that this was “a global issue that could have happened anywhere.” Outside the consulate, he reiterates this message in person: “It’s crazy. We really have to understand that this is beyond a terrorist attack, to defend our core values of freedom of speech.” Western media organizations have adopted a similar message. Like last month’s ruckus over The Interview, the Seth Rogen and James Franco film that depicts the death of North Korean leader Kim Jong-un, the artists and writers behind Charlie Hebdo have taken on a significance far greater now than ever before, because—so the message goes—this could have happened anywhere.

But, really, it couldn’t have. Look at the cartoons Charlie Hebdo published, and you’d be hard-pressed to imagine them being printed anywhere in Canada—not as reproductions, but as original editorial content. It’s just not our style of comedy. Republishing is an ethical choice—today, for example, the National Post has printed several of the controversial cartoons; Frank magazine has declared its intent to reproduce a full gallery. (Domestic media have drawn parallels between Charlie and Frank, but Frank doesn’t have nearly the readership that Charlie enjoys; and, in any event, Frank is more tabloid mockery than outright mean, more goofy Photoshop than crass caricature.)

The division lies within national senses of humour. Canada’s is tame by international standards—Eugene Levy and Colin Mochrie, Bob and Doug McKenzie, stand-up comics you’d gladly invite to dinner. France’s humour is infamous for being nasty: Harriet Welty Rochefort, an American blogger in Paris, describes French comedy as “more oriented toward others than themselves, less nonsensical than English humour, more cruel. It is never self-deprecating: it is combative, fuelled by ridicule and mockery and it needs a target.”

All of this applies to Charlie’s lambast of Islam. Its humour shoots out like an arrow; ours retreats inward from the cold. Plantu, a popular French cartoonist, was eerily prophetic about the consequences of this aggression more than a decade ago: “We do not have the detachment that characterises English humour, we are more militant. If we have a cause to protest, however minor, we tear open our shirts, run into the street and shout ‘Shoot me!’”

This is the French comedic tradition. An early popular example would be François Rabelais’ Gargantua, one of the country’s most famous sixteenth-century novels. The hefty tome features more poop and dick jokes than Rogen’s entire filmography. Sure, French wit is equally known for swift wordplay and farce, but the evolution of flagrant l’humour engagé, political satire, is de rigueur in France. Canadians may consider it puerile.

It’s no surprise, then, that even in the interests of informed journalism, the CBC’s director of journalistic standards and practices, David Studer, determined that the network still wouldn’t show the cartoons in the wake of the shooting. “We wouldn’t have published these images before today—not out of fear, but out of respect for the beliefs and sensibilities of the mass of Muslim believers,” Studer wrote in a message to his staff. “Why would the actions of a gang of violent thugs force us to change that position? ”

The stereotype is trite but true: Canadians are too gosh-darned polite. (Our most French province is the exception; so far, eleven Quebec newspapers have agreed to republish Charlie’s cartoons in solidarity.) It is telling that Western audiences have found deeper meaning in cartoons drawn this week in response to the tragedy than the ones that earned their authors a death sentence. The originals were crude, silly, adamantly offensive, and necessarily French.

At the Toronto vigil, Aucoin takes this in stride. “We use this kind of humour—and we have to continue, because it’s our story,” he says. “It’s more difficult for Canadians to follow our humour, because it’s inside us.”

Michael Fraiman is a Pitblado fellow at The Walrus.