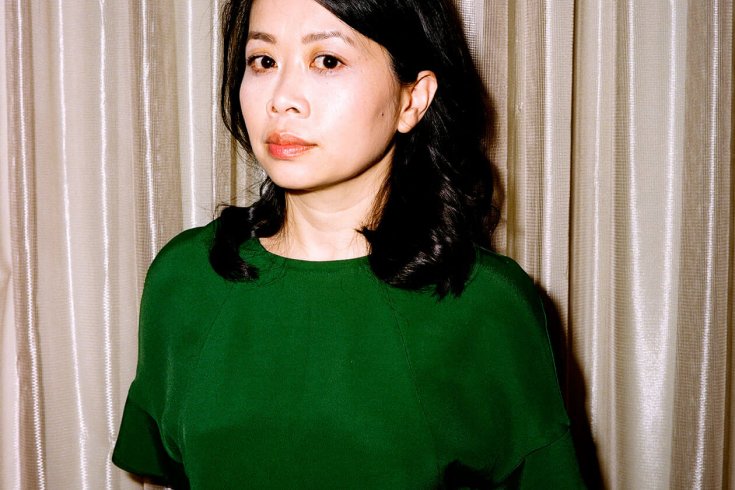 At sixteen, waiting out a bomb scare at her high school while next to a display of dissected insects, Souvankham Thammavongsa wrote a poem called “Frogs.” She treated the poem as if it would be her last. “I didn’t want to go out without it being my choice—or at least without an argument,” she said in an interview. “I was angry.”

Far from her last, “Frogs,” which appeared in her 2003 debut, Small Arguments, became what she considers her first “real” poem. Realness refers to how poetry, for Thammavongsa, should feel like a well-built table, and “no matter what anyone does to it or says of it, it doesn’t wobble.” It also means a poem that readers can’t leave behind. “I hope I’ve said something there that matters. And that they carry that with them wherever it is they mean to go.”

“Frogs” contains nine lines, twenty-six words, three commas, one semicolon, and no periods. Like its ##173;companions in Small Arguments, the poem is exceptionally spare. At first glance, readers might mistake Thammavongsa for a member of the “insta-poet” generation: a group that includes global sensation Rupi Kaur and whose Instagram-friendly affirmations—easy to skim on a smartphone—marry well with snappy social-media discourse.

But Thammavongsa’s poetry isn’t designed for quick consumption or feel-good moments. “My poems don’t think for you,” she has said, “they think with you.” They do this in part by portraying her subjects without verdicts or mawkishness. Take “Frogs,” a vivid, exquisitely arranged tableau depicting the web-footed creatures in pickle jars with “eyes, cupped / inside shrivelled lids,” and declaring that we “mined their bodies / to know ours.” The poem begins with the line “do not belong” and ends on “remain,” quietly defiant bookends for a composition born of a terror tinged by fury. That fury has been the driving force behind one of the most striking voices to emerge in Canadian poetry in a generation. Austere and political, it’s a voice embraced by lyricists, formalists, experimentalists—whatever classification of reader you can name.

Thammavongsa has been described by her first publisher, Beth Follett of Pedlar Press, as a woman who “willingly increases difficulties for herself.” She devoted her first collection almost wholly to descriptions of decaying or dying nature; her second, Found, was a gripping interpretation of a scrapbook her father kept in a Lao refugee camp in Thailand; and her third was an investigation of light: as element, metaphor, technology, companion to darkness. Her fourth collection, Cluster, released this spring, is billed as a book about meaning. How meaning can “blow up, crack something we had not seen, or darken what had been so clear to us.” The meanings that “cluster” in Thammavongsa’s new collection are many: the deadly legacies of war (cluster bombs deliver tragedy in several poems), the shape-shifting nature of potent childhood memories, the brutality of commerce.

Her interest in such themes isn’t merely creative impulse or writerly curiosity—either of which, in the right hands, might be enough to result in meaningful work. Thammavongsa writes to prove she exists. Each poem is a deliberate arrangement of evidence, just what’s required of what she observes and thinks—not a syllable or metaphor more—to stake her claim to being.

Thammavongsa, who grew up in Toronto, has described her family history in many venues. Here, in part, is one version, taken from an article she wrote for Granta magazine: “After the war in Vietnam ended, we were some of those three million refugees nobody wanted. . . . I was born in the Lao refugee camp in Nong Khai, Thailand in 1978. I was born weighing two pounds. My father tells me that this is the size of a pop can. I did not have a birth certificate. Nothing that said I was born. ‘Stateless’ is the word given to someone like me. . . . I was not supposed to be there, and no one expected me to live.”

Thammavongsa has railed against the sense of being underestimated ever since. She’s written of growing up in a house without books, where newspapers had more prosaic uses than to be read (such as lining the floor beneath wet boots). As a young poet, she fashioned her own apprenticeship: distrusting creative writing classes (she found the poetry they produced boring), performing in dingy bars, and absorbing a wide range of voices, from Gwendolyn MacEwan and Irving Layton to Dionne Brand and Edna St. Vincent Millay. Her first book came to stand for the missing record of her existence. “We need documents to prove that we are alive and real,” she said in an interview, referring to her early statelessness. “It isn’t enough that I happen to be right here.” Holding Small Arguments, the product of her own meticulous labours, in her hands, offered Thammavongsa a profound legitimacy, the sense that she’d finally been granted “a place of belonging.”

Thammavongsa writes simply—her vocabulary is plain, adjectives rare—in part because she’s writing to the child she was, “telling her about the things that are here in the world and to not be afraid.” She relishes using “ugly” words: this, that, is, here, its. “There is nothing elegant or delicate about them,” she says. “They are small and poor.” Despite paying attention to flora and fauna, Thammavongsa has never written nature odes. “I have no precious feelings for these things,” she once said. What she cares about instead is the unsentimental reality she draws forth when depicting, as she did in Small Arguments, a bee split in two, a dying butterfly, hacked-open fruit with dripping, blood-shaded interiors. She once said, “I took items that could have been cute and sweet and removed any tender feelings we might have of them.” That first book, in fact, was full of violence, the very thing with which Thammavongsa equates her poetry’s spareness. Minimalism, she has said, “targets the fluffy meaty stuff of language and rips it out. What we are left with is something bare.” Bare equals real, an object acknowledged, allowed to be itself.

Small creatures populate Cluster. In “Ants,” she imagines her own dead body being passed along by these diligent workers and lowered to “fill / the hole / I didn’t / make.” In “A Spider,” the web drawn from a “small dark pit” will undergo repair after repair and “outlast / our dim little buildings.” Her genius lies in how she creates homes of meaning for such seemingly marginal objects—and jolts her readers out of their unexamined ease as Canadians. “Postcards from the Outskirts” begins with a bush of blueberries that display a “blue lustre as cold as steeled shells.” Note how Thammavongsa plants an idea in our minds with “steeled shells.” Now watch as she detonates it. The scattered blueberries:

By pointing so bluntly to the absence of explosion, Thammavongsa makes us feel its impact with devastating force. With equal shock, we recognize how randomly we are spared.

Cluster bristles with outrage. In a series of collage-style “Brokerage Reports,” Thammavongsa confronts the way financial markets co-opt language, draining it of music and meaning. In “Brokerage Report II” the words robust and concerns appear repeatedly: “It’s robust. The complex dynamics,” “Concerns / have been raised,” “The rest of the world. It’s robust . . . / Notwithstanding concerns.” It’s interesting to pair these hypnotic, staccato “reports,” and their disregard for human lives, with a poem like “Christmas”: same big-picture injustice, this time pulsing with distilled experience. The narrator works the night shift, counting cash from the day’s sales: “We are five levels below the ground / I didn’t know basements go this far down.” Thammavongsa’s fidelity to fact and perspective—“The cash passing through / Is not mine / I have never seen / This kind of money before”—render the poem a potent protest. The poem’s moments of reprieve—a motherly coworker shares a meal, kindly asking no questions—float up and knock against the below-ground ceiling, echoing our own frustration at the circumstances that have dropped the workers into this fifth circle of hell.

Thammavongsa sometimes leans toward the tone of moral certainty that can infect poets who habitually address corruption and injustice. On balance, her anger is persuasive, and it’s restrained enough to be tremendously moving. In “Minute Maid Poster,” Thammavongsa grants a humble piece of home decor—a poster-sized ad featuring orange groves—the consideration normally reserved for masterpieces in art galleries, but she does so in the manner of a child conducting a visual experiment, noticing how the dots of green grass and blue sky merge as she steps back: “It was / the distant looking that brought them together.” The poster, however, emerges as a sinister messenger, silently foretelling heart-rending moments in the family’s future—back-breaking low-wage employment, tragic illness. The poem ends on the idea of “bitterness” but not before the poet’s mother advises her “not to think on it too much.”

Thammavongsa’s poetic impulse is protective. She doesn’t rehash raw personal details or expose loved ones. She set this principle early. In Found, she chose to contemplate rather than aggressively decode her father’s scrapbook. (It was written in Lao, a language she doesn’t read.) Other poets may have been tempted to interview their parents, research life in refugee camps, seek out a translator. Thammavongsa instead placed herself within her own fragmented understanding of her earliest days and wrote, simply, of what she saw, in a voice that combines clear-eyed distance with intimacy. What resulted were poems with titles such as “What I Can’t Read” and “House, a Sketch of” and this moving portrait of her father’s handwriting: “He carved / every letter / into / the sound / its / shape made.”

That same clear-eyed intimacy appears in Cluster’s “O,” the longest poem Thammavongsa has ever published. The fifteen-page tour de force—every bit as taut as “Frogs”—places the reader firmly in the act of making an O, thereby confronting the surprisingly meaningful agency called for in that simple task. The task mirrors what Thammavongsa sets out to do when she writes a poem: offer readers a clear perspective to consider, one for which she has drawn the line between what belongs and what doesn’t.

Anita Lahey’s most recent book is The Last Goldfish: A True Tale of Friendship.