Skip to the Loo | The Walrus
Skip to content 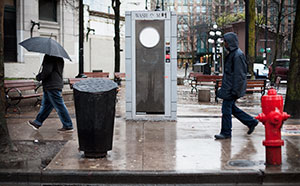 One spring evening, a half-dozen Vancouverites were waiting at a downtown bus stop, loaded with shopping bags and fiddling on their iPhones, when a homeless man of classic description came ambling down Seymour Street, dropped his trousers to the pavement, and dropped a deuce as well. The shoppers, either because of their urbanity or their anxiety, would not deign to notice—except one stout woman who said to anyone that was listening, “Is that really necessary? ”

Vancouver’s core has exactly six public toilets available after dusk, only two of them in the Downtown Eastside, where the majority of the city’s homeless live. If the main virtue of these unsightly box stalls is that they clean themselves, their main utility may be as billboards. Built and managed by advertising giant JCDecaux, one was installed last year in Pigeon Park—an unlikely place for luxury goods advertising, given its function as a meeting place for elderly people in wheelchairs, legs raised and purple from diabetes, while the more able bodied scour cracks in the pavement for squandered rocks. I checked on that toilet a couple of months after it appeared, and was almost relieved to find it out of commission. Helpful graffiti on its frame informed me that “this toilet has never worked.” A second one, near Main and Powell—the area’s epicentre of dissipation and fellowship—was run over by a truck, and a dispute with the insurance company held up its replacement for months.

Songs in the Key of Pee

A musical explores a pressing issue

Is relieving oneself a right—or a privilege? In Urinetown, Greg Kotis and Mark Hollmann’s Tony Award–winning musical, it’s very much the latter. Aspiring urinators may do so only in pay-per-use facilities, all controlled by the malevolent Urine Good Company. The hard-up are sent to Urinetown, a mythical place thought by some to lie along frothy golden canals—“like Venice, but different”—but in reality more like kingdom come. Kotis conceived the story in Paris, where he debated whether to “splurge and use one of the toilet pods I could see looming in the distance.” After he moved to New York and encountered a new level of public poverty, the toilet joke evolved into a serious project. “My few weeks of being broke in Paris—as opposed to poor or impoverished—helped me to see the poverty of my newly adopted city, and to understand the powerlessness of the characters in Urinetown.”

The general, moneyed citizenry doesn’t notice this dearth of toilets, because our notion of private and public space has become so muddled that we consider a Starbucks to be the same thing as a public loo. My mother, for one, arranges her downtown shopping itinerary so she only ever uses the facilities at Holt Renfrew, thereby avoiding sticky floors, unflattering lighting, and whatever germs are carried by people who shop at Winners. But those atrocities are nothing compared with the reality of the nearby underground toilets at Victory Square. Open from 6 a.m. to 6 p.m., they reportedly cost $100,000 each year, and still manage to feel like an ancient burial chamber—the type of place people dare each other to walk into.

Meanwhile, in the vicinity of the actual catacombs of Paris, the same ad company that Vancouver has contracted to install seventeen no-frills auto-toilets over twenty years has received a contract to install 400 of a finer model, sleek and spacious. In New Zealand, a public washroom designed by artist Friedensreich Hundertwasser was modelled after colourful temples (bathrooms being places of contemplation), and incorporates a living tree. Berlin spent $1 million recently just to beautify the underground toilet in Alexanderplatz. And across Europe, the Urilift pop-up toilet rises from the ground in the early-morning hours, to service sloshed bar patrons before retreating beneath the pavement at dawn. All of these are free, and serve as more than measly concessions to the disenfranchised. In Canada, we’ve reduced “public man” to a kind of Star Trek character—evolved beyond the need to take a slash.

What’s most startling is that, in almost every other way, Vancouver’s current city council has made laudable commitments to the public realm. Mayor Gregor Robertson and his Vision Vancouver team have suffered the wrath of car heads by usurping major roadways and turning them into bike lanes. They’ve multiplied the number of street food vendors, and have overseen a proliferation of public art. “These are broad philosophical shifts,” says Andrew Pask of the Vancouver Public Space Network. “But we’re also taking hits—street furniture for sure.” Benches are now designed to prevent people from sleeping on them; payphones are banned by businesses, because they “only attract druggies,” one merchant told me. “And there’s been much more closed-circuit television,” says Pask. “It’s all an increase in the securitization of public space.”

Perhaps these withered aspects of our public realm, like melting icebergs, suffer from some uncharitable decision we all made long ago. Because when we finally decided that suburbs weren’t safe so much as sterile, and our downtowns once more became places to live, all the righteousness of that new urbanity concealed a lingering fear of real body heat, of truly sharing space. Nor is it just the homeless who lose out; there was a time when anyone would sleep on a park bench, when it wasn’t a sign of delinquency but of a serene trust in one another. Now nobody will secure themselves the most basic relief of a toilet without either paying up or cringing at the grisliness of the freebies.

But courage! There is another way.

Consider Oppenheimer Park. More than a century old now, this block-sized green space was a happy enough family zone until the ’80s, when the cocaine trade and the associated violence overran it. Its public washrooms—fortified, glowering things on the park’s perimeter—were a nexus of the trouble (such washrooms are, after all, the only private spaces available to “undesirable” populations). Steve McFarlane, of the local architectural firm MGB, was hired, along with landscape designers Space to Place, to head up a massive redesign of the toilets, as well as the playground, the plantings, the activity centre, everything—because everything is connected in and through public space. In that spirit, his first step was to meet with the parks board, the Carnegie Community Centre, the nearby Buddhist temple, a Latino shelter group, the Japantown business association, and local merchants, residents, and transients, to hear their various concerns and hopes.

The heavy lifting began in June 2009: Low shrubs, where people hide drugs, were removed. The playground’s sand surface, where needles lurked, was replaced with recycled rubber. The activity centre was made ovoid, to eliminate dark corners, with the men’s and women’s facilities located at opposite ends. The entrance to the men’s room was fitted with a lock that keeps the door permanently open. Concrete and plywood were replaced with porcelain tile and stainless steel. “We have a responsibility,” McFarlane says, “particularly in the Downtown Eastside, to provide usable facilities. Aspects of these folks’ lives are already dehumanizing. To add that they’re forced to urinate in an alley is further dehumanizing.”

The rebooted park opened in July, in time to celebrate one of the city’s oldest get-togethers, the Powell Street Festival. Adults and children from all walks of life filled the lawns, and moved through the park with the regularity of some larger, invisible clockwork. As with the easy camaraderie that thrives in Turkish baths, say, or the perfect picnics that spring up at Place des Vosges in Paris, this was undeniable evidence of the power of generous public spaces. We seek relief in the commons. And surely it’s coming. You can only hold it for so long.

Michael Harris is the author of Solitude and The End of Absence, which won the Governor General’s Literary Award. A faculty member in the Banff Centre’s literary-journalism program, he currently lives in Vancouver.
Grant Harder

Grant Harder is a portrait photographer. His work has appeared in the New York Times, The Atlantic, enRoute, and Monocle.