Santa, Take the Wheel | The Walrus
Skip to content 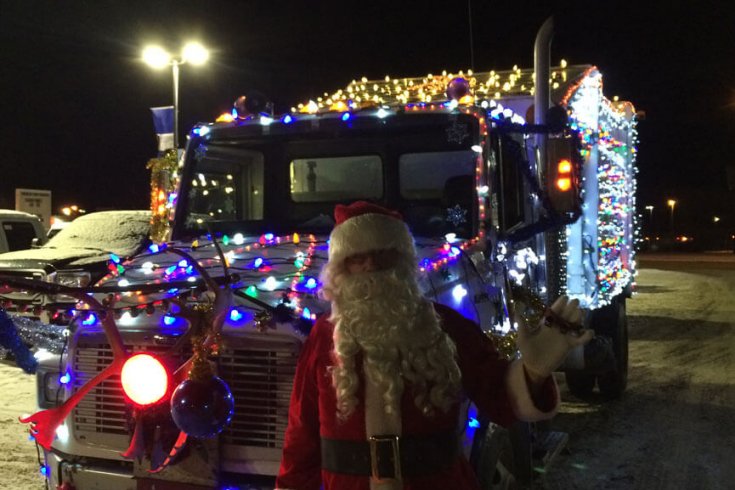 Bill Henderson with his truck. Garbage Truck Santa and his sleigh

I’m worried about finding Santa’s house. It’s dark, and snowing, and I don’t know the neighbourhood. But when I turn onto his street, my worries drift away: One house on the street has strings of multi-coloured Christmas lights blazing on every tree in the yard. It’s mid-October.

Wayne Henderson meets me at his front door. He’d left the lights on, Rudolph-like, to lead me in, he explains; he doesn’t normally turn them on before Halloween. Henderson is fifty-four, with pale blue eyes and ruddy cheeks, and for the past two decades, he’s spent each holiday season behind the wheel of a garbage truck, driving around Whitehorse dressed as Santa Claus.

It started out simply enough, he tells me after we’ve settled in at his kitchen table, with his husky, Sasha, curled up nearby. Henderson was a casual employee with the City of Whitehorse in the early 1990s, on municipal garbage pick-up duty, when he would notice kids spilling out of their houses to watch his big truck go by. Around Christmastime one year he asked his boss, “What would you think if I put a Santa suit on? ” He got the okay so long as he promised not to get his false white beard caught in the truck’s trash compactor.

Garbage Truck Santa was an instant hit: Henderson’s truck was mobbed as he made his rounds. “It got to the point where I couldn’t even get my garbage done,” he says. “It got dangerous. The kids would come from all directions.” And his truck set-up kept getting more elaborate. Henderson strapped a set of caribou antlers on the front of the truck, and a mechanic wired his cigarette lighter to power strings of Christmas lights that draped the outside of the vehicle. (Later, a 6000-watt generator was installed in the back so Henderson could really light things up.)

In his third year as Garbage Truck Santa, Henderson started making school and daycare visits instead of trying to get his garbage rounds done in costume. Even then, the mob scenes continued: bigger kids mowed down smaller kids in the schoolyard to rush the truck. So Henderson enlisted the teachers to keep order, and help him distribute candy canes safely. (These days, his system is well oiled; his arrivals are planned and scheduled well in advance.)

Henderson figures he visits about ten schools and twenty-five daycares each holiday season, plus a couple of long-term care residences. He’s on his third career Santa suit, and he goes through four or five pairs of white gloves for each day that he makes rounds. Touch enough little hands, and white turns grey pretty fast. When he started out, he paid for everything out of pocket, but nowadays, local businesses donate the lights, the candy canes, even the gloves. His truck wears upwards of 1500 Christmas lights, attached using half-a-dozen rolls of duct tape. A set of jingle bells hang from the hood; Henderson pulls a string from inside the cab to make them ring. Last year, he brought on four helper elves to keep the operation running, including Henderson’s twenty-two-year-old son, who grew up adoring Garbage Truck Santa but never knew who was behind the beard. “It took him awhile” to catch on, Henderson says.

In 2012, the same year that Henderson received the territorial Commissioner’s Award for exceptional volunteer service, the city upgraded to a more modern garbage truck model, and Henderson’s old rig was sold off. The new trucks, apparently, weren’t compatible with generators or Christmas lights. So for two years, Garbage Truck Santa was absent from Whitehorse’s streets. Residents were furious: “Citizens fight to save Santa’s garbage truck,” went the Yukon News headline. City council received hundreds of letters of protest, and council members reported being stopped on the street by angry constituents. “You can’t hardly go anywhere,” Councilor Betty Irwin told the paper.

But last year, Henderson rode again. The owners of the trailer park who had bought the old truck made it available for a few days, and the local Ford dealership came on board to cover the fuel costs and help out with any necessary maintenance, too. Henderson was thrilled.

Still, it can be a tough gig. Henderson has run across a few members of Whitehorse’s naughty list: kids who try to pull his beard off, mainly. “I’m always ready for it,” he says, gesturing protectively towards his chin, where there’s nothing but a trimmed goatee in the off-season. And even the good apples can be exhausting when they show up by the hundreds. “You know you’ve seen Santa in the mall? He’s there for an hour or so,” Henderson says. “I do it for ten hours.”

Last year’s rounds, making several visits a day, wore him down: “My throat was raw from ho-ho-hoing it.” But with another loan of the truck from the trailer park, he’s back on the streets again this year.

Not much has changed over the twenty-plus years that Garbage Truck Santa has roamed Whitehorse: Kids still love candy canes and big trucks. Henderson does hear one line these days that he doesn’t recall from the 1990s, though.