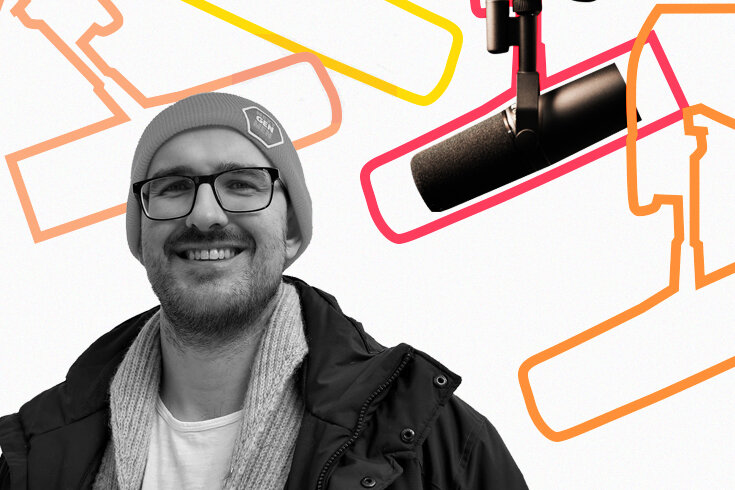 HOST: “Man up,” “be a man,” and “don’t be a girl” are phrases that boys often hear while growing up. They send the message that men should always project toughness, stoicism, and independence.

Jake Stika believes that we need to teach boys to express vulnerability, ask for help, and show compassion and that doing so will benefit everyone in our society.

JAKE STIKA:
I’m Jake Stika and I’m a man. I look like a man, I’m of an appropriate height, 5’20”, for those wondering, I have facial hair and a receding hair line, and I dress muted tones. I also act and feel like a man, whatever that means. What these things mean to me is probably different than what they mean to you or the guy in line at Tim Horton’s.

Here’s how I came to my understanding of what it means to be a man.

Let’s go all the way back to my paternal grandparents. You see, back in the seventies, you didn’t get to travel from communist Czechoslovakia much, but my grandmother was fluent in seven languages, which meant she was uniquely qualified for her job. As a technical secretary sent on diplomatic missions to far flung places like Uruguay and Kenya leaving my grandfather as primary caregiver to their two sons.

Now I won’t say my grandfather was a transformative caregiver, but he kept them clothed and fed and, uh, took some of the load. Uh, my father took some of the load as he was six years older than my uncle. So, when I got to know my grandpa, I knew him as a kindly man with wispy white hair and eyebrows that looked drawn on with Sharpies that was supportive of my grandmother and my old man.

Now when my parents and I immigrated to Canada as the Berlin wall fell, we had the classic immigrant story of leaving Czechoslovakia on vacation to Austria, never to return. My dad hustled and worked under the table, even sleeping in his employer, in the closet at his employers, several towns away. So he could send money back to my mom and I in the refugee camp.

When we came to Canada, this man who had been the youngest manager by 10 years of the largest data centre in Czechoslovakia, took an entry level job as a computer programmer with Burns Meats.

Remember that hotdog company that used to be at part of every barbecue? Despite all the hard work in sacrifice, I never found him to be absent. He supported my mother and he was a doting father. To me. He even shifted his working hours to seven to three. So he could always take me to basketball.

Finally, let’s talk about me. I grew up an only child and as a newcomer to this country, everything I learned, I learned in relation to others. I remember going to preschool and bawling my eyes out because I couldn’t understand anyone until a kindly woman named Irene, took me by the hand and walked me around and pointed out things like tree and green.

I remember in elementary school wearing what I thought at the time was this wicked tie dye WWE t-shirt, but it happened to be pink and purple and being made fun of relentlessly.

I remember never backing down from a fight resulting in many visits of my mother to the principal’s office. I remember obtaining status as a star athlete. “There goes Jake, the basketball player.” As I walked around my high school. I remember thinking that I wasn’t much of a man until I lost my virginity in university.

Growing up, it was clear to me that being a man existed in the confines of what I like to call the “man box,” never show emotion, unless it’s anger. Don’t ask for help, lest you be considered weak, have a lot of sex with women, or at least be seen as doing so. Distance yourself from anything feminine, less you be considered gay, have more power and more status than the next guy. You see, but I also remember binge drinking in second year university when I was academically ineligible to play basketball.

I remember my best friend’s 13 year old brother dying by suicide, likely due to homophobic bullying when we were just 21. I remember reading the game as more of a manual on how to pick up women than a journalistic expose. I remember breaking down and sharing thoughts and feelings I’d never shared with anyone before with my girlfriend when I was 22, as I was struggling with depression and going to therapy. Suffice to say coming of age was a difficult time.

Stepping outside of the man box can be like trying to cross the de-militarised zone in between North and South Korea. Don’t step on the crying like a girl mine, or get shot in the back with a homophobic slur for telling another man, you care about them. The folks who have led the way in removing these landmines and snipers are women, and those who identify as gender and sexually diverse. Us men have had a lack of role models when it comes to shifting status quo.

I was lucky in that. I’ve had men around me, show me what a man could be. My grandfather showed me that you can be supportive of your partner’s rockstar career and not be considered less than. My father showed me that being a breadwinner is not an excuse for not being a nurturing and doting parent. My best friend showed me what a it is to mourn and grieve and create space for others not like us. I showed myself how strong and courageous it is to be vulnerable, ask for help and bounce back.

What I want you to leave tonight with is as long as we keep coding these traits as either masculine or feminine, we will be stuck in this hierarchy where contextually one is deemed more valuable than the other. Women will languish at work as traditional ideals of leadership remain masculine, while men will feel inadequate as caregivers among their peers as long as nurturing remains feminine. Women don’t need to be told to act like men in heels to get ahead. Just as much as men don’t need to, uh, be told to get in touch with their inner feminine, just to emote.

Over the last 70 plus years under the banner of feminism, we’ve had a brilliant conversation about women’s roles and identities in society today. We’ve done a much better job of telling our daughters that they can do anything boys can do, but until we begin to do as good a job of telling our sons that they can do anything girls can do, we’ll be stuck with masculinity and femininity and the boundary between where the breadth of the human experience resides.

Patriarchy by definition is handed down to us through our forefathers. And if I look at mine, I know they’d be proud of me for breaking the mould and breaking out of the man box for both you and me. Thank you.

Our next event is coming up on April 27th, The Walrus Talks at Home: What’s Next? Register today at thewalrus.ca/events.