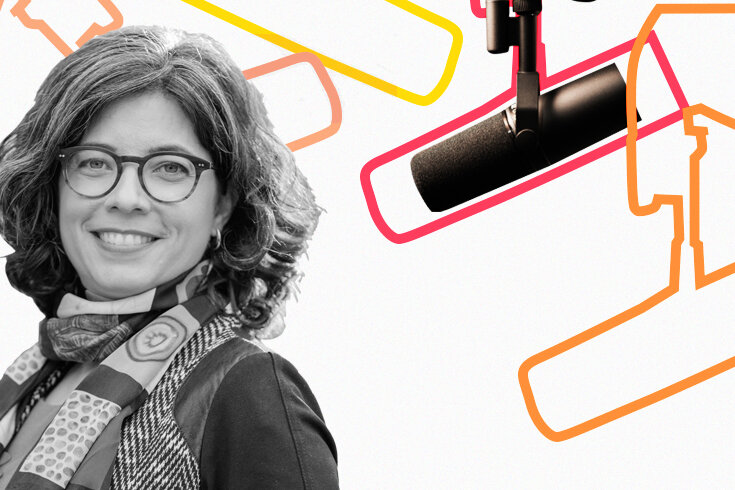 HOST: Even in the midst of a pandemic, healthcare needs to be covered, roads need to be fixed, which means taxes need to be paid. And ‘tis the season. According to our next Talker, there are 59 billionaires currently in Canada and over the course of their pandemic, their wealth increased by 87 billion. And she’s one of them. Welcome to The Conversation Piece.

CLAIRE TROTTIER:
My name is Claire Trottier and I am a philanthropist and tax justice advocate. I’m not an economist – my background is actually in microbiology and immunology. I have a PhD and up until a few months ago, I was a professor at McGill where I taught immunology. So why am I here? I am here because I am part of the 1%, and it is bananas situation, and I think that one of the solutions to addressing the growing inequality in our society is to tax me and to people like me. So how did I end up in the top 1%? Well, basically I won the lottery of life by being born into my family. My father Lorne is the co-founder and now the sole owner of a technology company called Matrox based here in Montreal that’s still doing very well.

And this accident of birth has basically given me access to a disproportionate amount of wealth and power. And I think that it’s my responsibility and the responsibility of people like me to first of all, acknowledge the immense privilege that we have, but also to actively work at changing the system from which we benefit.

So if you’re listening to me right now, chances are, you work for a living, you make a salary and that constitutes most of your income. That’s different from wealth. Um, when you have a lot of wealth, that wealth actually generates more wealth. So if you, for example, en invest significant funds in the stock market, you can get quite a nice return from those investments. So basically I don’t need to work for a living, and I think that’s, that’s a really unfair situation.

So what is the status of wealth inequality in Canada? Well, in Canada, the top 1% richest Canadians actually have 25% of the wealth in this country. That’s equivalent to the wealth that the bottom 80% of Canadian have. Um, there are 59 billionaires currently in Canada and over the course of their pandemic, their wealth increased by 87 billion.

So I think that we can all agree that wealth inequality exists and hopefully we can also all agree that wealth inequality is a problem. You know, when you have such events, concentration of wealth. So what are some solutions? I really believe that wealth taxes are a key part of the solution. And I’m not the only one who thinks this surveys show that 75% of Canadians agree with the idea of a wealth tax and fact, the majority of Canadians across geographies, age groups, and political affiliations, agree with the idea of a wealth tax, which makes this idea actually enormously popular all across the country.

What level of tax are we talking about here? When we talk about wealth taxes and what kind of revenue might you expect? Well today a bombshell report was released by a group called patriotic millionaires in collaboration with partners where they looked at, what you might expect if you implemented a wealth in over 40 different countries around the world. And according to their calculations, in Canada, if we implemented a wealth tax, we could expect an annual revenue of 78.9 billion. What they’re proposing is a 2% tax on wealth, over 5 million, a 3% tax on wealth, over 50 million and a 5% tax on wealth, over $1 billion. That’s a lot of numbers. It seems like a lot of money, but I assure you that level of tax will have no impact on my life or the life of other wealthy Canadians. In fact, that level of taxation would still allow wealthy people to continue acute leading wealth, just at a slower pace.

And I’m not the only wealthy person who thinks that this is wrong. Today I was one of over a hundred signatories from nine countries in the world of wealthy folks, calling for wealth taxes to be implemented. And I hope more people join us in this fight.

So if we had an additional 78.9 billion in Canada, we could do a lot of things. We could help tackle our crumbling healthcare system. We could help address the ravages of climate change, we could contribute to reconciliation with Indigenous peoples, amongst many other priorities. I really believe a wealth tax is an important start, but there’s other things that we could be doing such as looking at inheritance tax, addressing offshore tax avoidance, among many other measures.

HOST: Claire Trottier is a philanthropist and tax justice advocate. She spoke at The Walrus Talks at Home: Inequality in 2022, and she’s just one of the over 800 fantastic Canadians who have wheeled, walked, and webcammed onto a stage at The Walrus Talks. Our next event is coming up in March: The Walrus Leadership Forum: Fuelling the She-Covery. REGISTER today at thewalrus dot ca slash events.