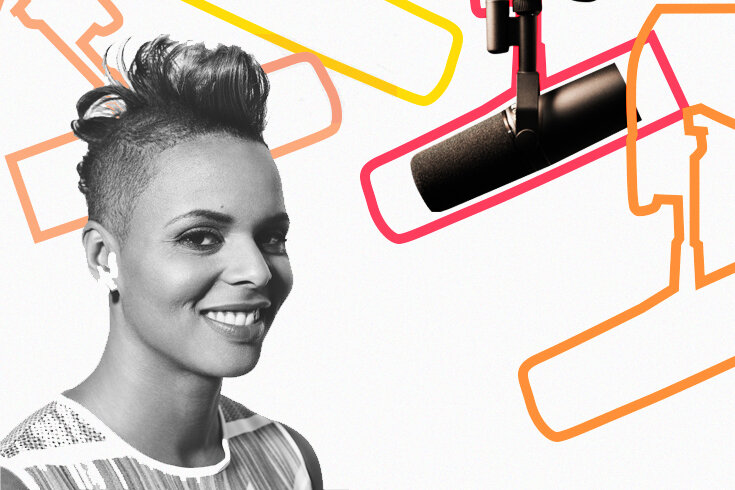 HOST: This will be our second Olympic Games held during the pandemic, and it promises to be a very interesting, and isolating experience for our athletes. As focused as Olympic athletes are this may be an opportunity to widen their gazes – like former Olympian Karina LeBlanc has. Welcome to The Conversation Piece.

KARINA LEBLANC: Hi everyone. How are you guys tonight?

That’s me, young shy. Couldn’t get me to speak. I observed the world and no one can ever believe that I used to be shy, but it’s true. You couldn’t get me to leave my mother’s side. I remember when we moved to Canada at age eight, my parents decided to make us go from comfortable to uncomfortable. I spoke English, but with us thick Caribbean accent. And I remember my first day at school, a kid put a firecracker in my hand and it went off.

Welcome to Canada. I went home and I told my parents, they were the worst people in the world. Why would they do this to us? I was lost. Sport would change that for me. It would give me confidence. I connected with people. I finally was in invited to sleepovers. I was cool. And the confidence started. And if anybody asked me, what do you wanna be when you grow up? I’d be like, “I want to be an Olympian.” What sport? “I don’t know. I just wanna do it.”

Not the shy girl. And I remember, like I said, confidence started I’d be on my teams and had fun. And I remember the first big team I tried out for, a BC team, I got cut. Coach told me I wasn’t what I was looking up. Every one of my friends made the team, but me, imagine that 14 years old, “I wanna be an Olympian.”

I Got cut. I remember being in the car and crying and my mom being next to me and you know how you are moms are, “it’s OK, we love you.” I’m like, ah, and my dad just kept driving. I’m like, “dad, why aren’t you crying with me? You’re the worst.” And I remember he turned around and he said, “what are you gonna do about it? Are you gonna let this one person and determine what you wanna be?”

And being cut was the best thing that ever happened to me because the next year I did 15 minutes more, every single day, 15 minutes before practise, 15 minutes after practise, I was determined. And the weird thing is it was me putting in the time and I started to believe in myself. So the next year I went out to the same tryout, the coach, standing there with his clipboard and he is like, ho, ho, ho in my head.

He, like Santa Claus, “ho, ho you came back, blah, blah.” I said “I did, but you told me I wasn’t what you’re looking for, so, I’m trying out for year older.” I would make that team. And I would go from standing in front of eight people in a soccer field to standing on a podium in a stadium with a sold-out crowd. And my heroes that were literally on my wall at home. Standing next to me.

15 minutes, more London, 2012, one of the best moments in my life. If you guys followed that tournament, which I hope you did, nine months before that 2011 World Cup, we came dead last. Now imagine that you give up everything. You sacrifice thing. You miss birthdays. You miss holidays. You believe this is the time you put in everything. Canada’s behind you. The world’s believing in you and you come dead last.

To say we were broken, was an understatement. John Herdman came in and he asked us our why. And that put the podium right there was right before we stepped on to receive our bronze medal. Mm. I won’t bring up the game or the referee call, ’cause that’s not where we’re here today.

I think I was actually proud of myself. Something inside of me said, there’s something more, there’s something more John Herdman, our head coach said to me, after that bronze medal game, “if you think your purpose on this earth is to kick a soccer ball for Canada, then I’ve failed you.” Wow. That’s why I’m here. Not to kick a ball for this country, he shifted my mindset and you always get what you’re looking for. I had a conversation one day and it led to this my greatest moment. My first trip as a UNICEF ambassador, I would go to Honduras and I do what most athletes do. Show up. Didn’t really read the email or the 50 page document.

They would debrief me and walk me to Honduras in a city – the second most dangerous city in the world. 44 deaths in the city that night. I’d be in a bulletproof car with gunmen outside. My hotel room door should have read the email

It’s the fact that I showed up and immediately I would notice five great jerseys, takes a lot to put me off. And I remember travelling with Sharon and and she was like, “what’s wrong? What’s wrong?” And I’m trying to be a jump in joy. I’m like,”where’d these jerseys come from?” She’s like, “what are you talking about?” She gets the coach. Coach comes in. “We got it from a Canadian years ago. It’s been our team Jersey is everything okay?”

Those jerseys were the first ever jerseys I’d worn as a child in the middle of nowhere. I was living my purpose last year. I decided to say goodbye now. Everyone’s like, are you crazy? Why wouldn’t you do another Olympics. It came down to discussion I had with my father. And he said, “would you rather retire on home soil in front of the people who’ve inspired you for 18 years? Where that jersey and doing your last wave of a goodbye in front of people, who’ve inspired you or would you rather do it in Brazil when no one knows who you are?” I did that last lap with my best friends, with people who’ve been in this journey with my entire life. And the reaction of Canadians made me understand it was the right time.

HOST: Karina LeBlanc is an Olympian, and former professional soccer goalkeeper and current GM of the Portland Thorns FC, and she spoke at The Walrus Talks Destiny in 2016. And she’s just one of the over 800 fantastic Canadians who have wheeled, walked, and webcammed onto a stage at The Walrus Talks. Our next event is coming up in March: The Walrus Leadership Forum: Trust in Tumultuous Times. REGISTER today at thewalrus.ca/events.

Karina LeBlanc is a recently retired Olympic and professional athlete. She is the longest serving soccer player for Canada, having played for nearly eighteen years.