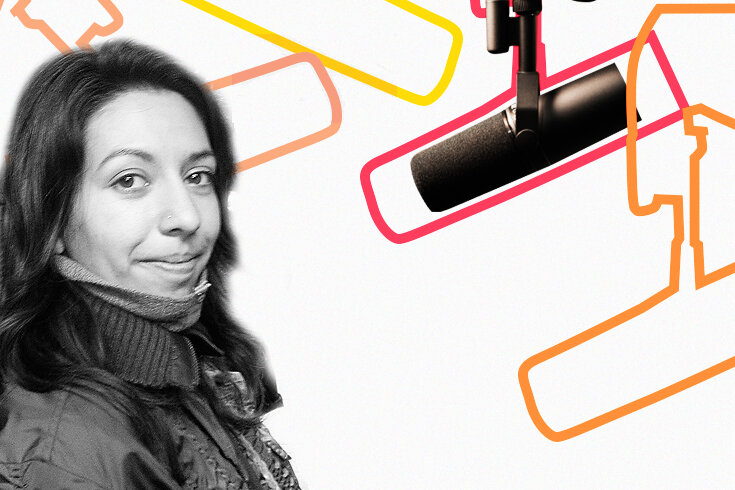 HOST:
There are days when it may seem like we have solved the diversity issue in the arts here in Canada. When you look around and you finally see Indigenous books winning the biggest awards, and Black poets sharing the stage with their literary peers it starts to feel like hope.

After literal decades of colonializing the art of minority groups it’s important to hear from people like Devyani Saltzman, who has led programming at the Art Gallery of Ontario and the Banff Centre. Because according to Saltzman, while we are promoting the individual people, we don’t do enough to create a safe space for true systemic change.

DEVYANI SALTZMAN:
We are at a tipping point, not only in terms of climate change, so eloquently spoken about in politics, but in culture as well. The shift from old stories to new stories. Stories that have previously existed in the margins that are now becoming closer to the centre. I’m thinking about the MoMa’s recent re-hang and the reframing of the artistic canon from perspectives that are often overlooked and voices that are often sidelined. To Ian Williams, winning the Giller Prize two days ago. And when yes, we, and when we speak about survival and culture, I think of two things: the continued evolution of our shared narratives, and the survival of artists leaders and change makers involved in pushing those narratives forward.

There are many people of colour, Black, Indigenous, and people of colour having this conversation right now. Informal networks, trying to survive the tipping point and facing the shared ceiling of colonial legacy and power together.

I am one of those people. I’ve worked in the arts for 10 years. As a child of a Punjabi immigrant and a Jewish Torontonian, first as the founding curator at Luminato Toronto’s festival of arts and creativity. And then as the director of literature at the Banff Centre for the Arts, the first woman in the role in the centre is 85 year history and the first woman of colour.

Now I work at the AGO, another colonial legacy institution, as the head of programming. It’s the fourth largest museum in north America, and my job is overseeing an amazing group of curators who work in performance, talks, and film specifically with the mandate of opening doors and welcoming people into a space that they often didn’t see themselves in. When I was hired at Banff, the conversation around diversity and inclusion, wasn’t as front of mind, as it is today, I was honoured by the appointment at 27 and energised to see how one could shift and diversify programming to better reflect the voices of this country.

Shifting institutions, especially from the inside out is not easy, even when invited in. I had a vested interest: as a young journalist, I had never applied to their literary journalism programme, which is quite esteemed. I had never “seen myself” in that space, nor seeing myself reflected in those that would be my teachers. When I arrived, I spent three years introducing new programmes, an emerging writers programme, the centre’s first environmental writing programme and the centre’s first investigative journalism programme. With a self-described mandate to hire faculty of colour and Indigenous faculty. As we just said, seeing oneself in a space and lowering barriers to access by creating fully scholarship programmes is one of the most important things to the welcome. The welcome I hadn’t felt a decade earlier. This work takes resilience, any type of longitudinal cultural shift does. What I discovered quickly, and once out of the first blush of energised naiveté was that little matters to the BIPOC body doing this work around inclusion, if change in those values, aren’t commonly shared and structurally built into the institution one is a serving or those in the ultimate positions of power.

And this is the rub. If there isn’t alignment throughout an organisation around the true value of inclusion and diversity of differently lived experiences, it will backslide and it will wear you down in the process. Due to structural changes in leadership at Banff, I ended up through a restructure losing my team and a mentor who was dedicated to that change. She was not a woman of colour. The work became harder and more isolated, and eventually my health started to fail. The end came when I was unable to support the Centre’s first programme dedicated specifically to BIPOC writers, the programme closest to my heart that I had designed with faculty that included Gryphon prize winning poet, Liz Howard, and David Chariandy. I ended up in hospital exhausted for two weeks, unable to stand. The cost of this work, as many in this room may know, especially if it is uphill is ultimately one’s own personal health.

What is the point of this story? How does it relate to survival? I truly believe the survival of one’s own person, one’s own dignity, and the ultimate survival of healthy culture in Canada rests on increasingly asked the question, what is beyond that initial invitation and welcome? How can governance and leadership in legacy institutions truly be conscious and embody the values and understand the lived experience of BIPOC or differently abled folks? What I learned from my Banff experience is survival relies on knowing we are not alone. Upon returning to our Toronto from the mountains and beginning to speak publicly about my experiences as a senior leader in culture, people began reaching out. I learned of networks from historically marginalised backgrounds, forming networks to support each other. What was fascinating was there were so many, and they often shared the same common story: isolation within organisations, where they were often one of a handful of people in senior management or artistic leadership.

It was the 10% rule: the percentage of BIPOC folks when one walks into any established organisation, any boardroom, or in that case, most any room in Canada. The key to survival and resilience was knowing one was not alone. And that collective awareness and collective action can lead to shifts and organising organisational thinking and culture. So what does it mean to create sustainable change? I will be honest. I don’t know the answer to this, but I think about it often, almost every day, almost every minute. This is what I do know to truly support and retain a new hire in my case, or anyone’s case or move beyond proudly announcing a person and having them act as a spokesperson is to create a system of support in the workplace for those people. This means policy and training from the board level down, it means creative tactics for reaching that tipping point faster without the load resting on the shoulders of a single person or a small group of people. Think cluster hiring. OCAD U in Toronto demonstrated this beautifully recently when they did an Indigenous cluster hire hiring over five faculty members and now a POC cluster hire – meant to create a critical mass of senior BIPOC faculty and structural change.

Most importantly, I believe it’s always important to advocate the, for the freedom to speak of your experiences, bravely and safely, despite differences and hierarchies of power. It’s something the AGO and I are working on right now as part of a part of a policy around rules of engagement within the workplace and something I believe in deeply. You may wonder why this work is worth it – something I also asked myself. Broadcaster Jesse Wente advocates for working outside of our legacy cultural institutions and chose to leave the CBC and the Toronto Film Festival to start the Indigenous Screen Office – why fight at uphill? I feel there is deep merit to this and often consider starting my own cultural organisation or working with other BIPOC folks to do the same. But for now, I still feel there is worth in pushing for change from the inside. Especially as these spaces often have the platforms and budget to reach and potentially create transformative change for the most important constituents in this equation, our communities. Thank you.

HOST:
Devyani Saltzman is an independent curator and consultant working with organizations on strategies for programming innovation and new models of arts leadership and she spoke at CIFAR Presents The Walrus Talks Survival in 2019, and she’s just one of the over 800 fantastic Canadians who have walked and wheeled the stage at The Walrus Talks.

If you enjoyed this podcast, consider donating to The Walrus. We are a registered charity that relies on our community of donors and sponsors to produce compelling journalism, events and podcasts. Learn more about how your support can make an impact at thewalrus.ca/donate.