Running the Road to Nowhere | The Walrus
Skip to content 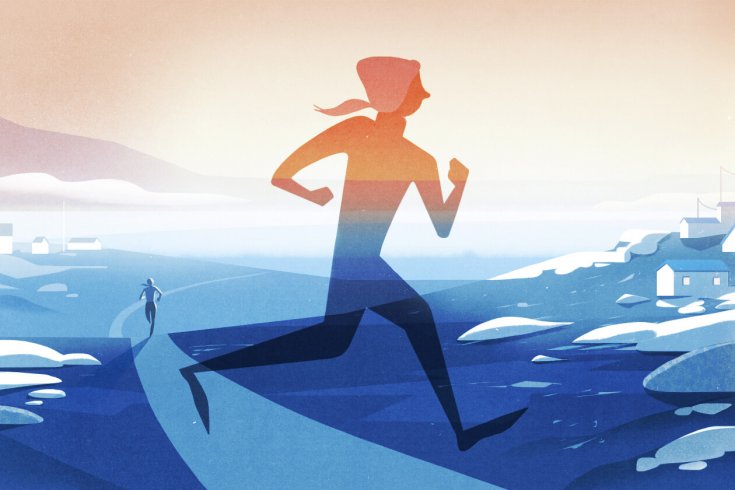 I open my laptop and search Google Maps for the Road to Nowhere. I’ve heard of it, vaguely—a road that leads out of Iqaluit, Nunavut, and dead-ends somewhere in the emptiness of Baffin Island. The strip of gravel is a running joke, from what I can tell, its road sign a tempting target for souvenir-hunting thieves. Like so many abandoned roads and mines and other forgotten projects in the North, it’s a remnant of a human footprint in the wild.

My search registers a hit, just as I’d hoped it would: a thin white line that breaks off from Niaqunngusiariaq, the busy road that loops above the territorial capital’s waterfront downtown and leads to the college, the hospital, the high school, and a major apartment-cum-hotel complex. On the screen, the Road to Nowhere snakes deeper inland, leaving the town and carrying on for a few kilometres before abruptly turning to blank space: open tundra. On my screen, a waypoint pops up: “End of Road to Nowhere.” That’s it.

As someone who’s just getting into running, I’m still shy about lacing up and going for a jog in front of people. An isolated stretch on the Road to Nowhere? Perfect. I pull on yoga pants, a long-sleeved shirt, and trail runners, and head out around 9:30 a.m. I quickly leave Iqaluit’s colourful apartment blocks behind, following the road’s pale gravel. Soon, the Road to Nowhere turns a corner, and the capital vanishes—now I see nothing but Baffin Island’s green-brown hills, their valleys dotted with lakes and shallow streams that run down toward the bay. I pass the shattered plywood remains of an old cabin, spot campfire smoke on the shore of a distant lake. As the emptiness around me settles in, I catch myself straining to spot anything out of place in the landscape: a large blotch of yellowed-white, vanilla ice cream fur, say. I know that polar bears show up in Sylvia Grinnell Territorial Park, on the far side of town, now and then.

When I reach a set of picnic benches and barbecue grates, I stop and turn back towards town. Just one vehicle had passed me on my way out—a beat-up RAV4—and it passes me again as I head home. I wonder what its driver is doing out here.

When I return to Iqaluit a few days later, after a trip to North Baffin, I’m determined to make it all the way to the end. I fight a headwind as I run up and out of town, again past the cabin remnants, an abandoned shipping container, and the picnic area where I’d turned back the last time. The road crosses a small stream, and I pound over a bridge and then struggle up one final hill as it curves around. I’ve reached the End of Road to Nowhere.

It isn’t what I’d expected. I’d envisioned a dead stop in the middle of the tundra, maybe, or the gravel road dribbling down into a narrowing ATV trail. Instead, I find a sand pit on my right, with a front-end loader parked and ready, and on my left, the gated entrance to a members-only shooting range.

It had never occurred to me that the Road to Nowhere might serve an actual, practical purpose—that it might lead somewhere useful. I’d figured the road was built years earlier, for some planned subdivision expansion or for a forgotten industrial venture. At most, I’d figured people were using it as an outlet—a way to get out of town, for a picnic or a party or, in my case, a spectator-free jog. The online map had confirmed my perception: a thin white line through a vast blank space.

“Nowhere” is relative. To many people down south, I was already in the middle of nowhere when I was sitting in a busy bar in downtown Iqaluit. The Road to Nowhere might just as well be called the “Road from Nowhere to More Nowhere,” in their eyes.

My home, in Whitehorse, is another capital of Nowhere; Canadians confuse it, almost inevitably, with Yellowknife, and when I speak to friends in the United States I typically just say that I live “near Alaska.” But I’ve learned there that the “vast, untouched Yukon wilderness” is actually full of human touches: old mine shafts with glass ashtrays and long-past-due canned goods still sitting inside; ATV trails and horse trails and mushing trails winding through the boreal forest; cabins and float plane docks and even whole country-residential subdivisions where you least expect them.

I’d assumed that the Road to Nowhere was useless. Plenty of Canadians, I suppose, assume the same about our North as a whole—they see it as a dollar-sucking wasteland, maybe, or perhaps as a beautiful blank space, a pristine emptiness, a Nowhere that should remain as such. Either way, they’re wrong. Nunavut and the other territories are a lot of things, but nowhere isn’t one of them.

As my hotel comes into view, several big trucks pass me on their way to to fill up at the sand pit. I turn my head away and squint my eyes against the dust and gravel that’s kicked up as they rattle by. The roads in Iqaluit need grading—even the Road to Nowhere.

The reporting for this story was supported by the Canada Council for the Arts.

Eva Holland (@evaholland) has written for Up Here, Grantland, and Outside. Her book, Nerve, on the science of fear, was published last year.
Min Gyo Chung