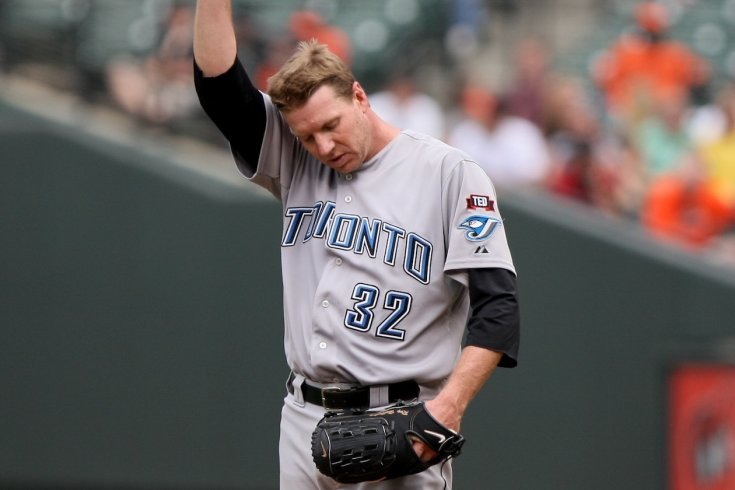 Roy “Doc” Halladay stands, his weight on his right foot, toes pointing towards home plate. The batter, Brandon Phillips of the Cincinnati Reds, rocks anxiously, hands twitching. The 46,000 fans at Philadelphia’s Citizen’s Bank Park are screaming. It’s Halladay’s first playoff game, a milestone his Hall of Fame career cruelly withheld for over a decade. Not coincidentally, it has come the year after he was traded by the Toronto Blue Jays, where he played twelve seasons, to the Philadelphia Phillies.

There are two outs in the top of the ninth and Philadelphia is up 4–0. Halladay steps back with his left foot, triggering his windup. Not a single Reds player, to this moment in the game, has hit the ball well enough to get on base. Halladay’s hands come from his chest, pumping over and behind his head before coming back to centre—a flourish familiar to any Blue Jays fan, even if the logo on his hat is new.

He moves towards the plate with a lumbering ease, like a father throwing to a child. The pitch comes in, a curveball. Phillips’s bat nicks the ball, which dribbles feebly in front of home plate. Halladay watches as his catcher scoops the ball and fires it to first for the final out.
Doc is swallowed by a swarm of celebrating teammates. It was, in 2010, only the second playoff no-hitter in the history of Major League Baseball. One of the sport’s most winningest losers finally had the world stage he deserved, and he made it count.

Roy Halladay died on Tuesday, a few months after his fortieth birthday, in an accident that feels more like a crime. His two-seater plane crashed over the Gulf of Mexico, taking with it something remarkable: in the age of the multi-millionaire athlete, with all the temptation that brings, Halladay was incorruptible goodness. In the hours after his death, athletes, fans, and media met online to share their favourite Doc-isms. The stories are legion, both athletic—the ten-inning shutout against Detroit or his perfect game in Florida—and personal. There’s the time he took a line drive off the shin, sending him to the ground in pain. He reached for the ball and threw out the runner before leaving the game with a shattered bone. There are the charity events, the autographs signed, the Little League teams coached, and, after that playoff no-hitter, the time he accepted the cell phone of a reporter, whose son, a young fan, wanted to tell him “good game.”

When an athlete as remarkable as Halladay dies, the stories we want to remember crowd together, guarding his legacy from the times we’d rather forget. We’ll remember this no-hitter and his perfect game. We’ll count his awards and his records broken. We’ll watch on YouTube as batter after baffled batter falls to their knee in defeat. We’ll find old photos of the young father changing his baby’s diaper on the floor of the Blue Jays’ clubhouse. We’ll scroll through his Twitter timeline and smile at his goofball sense of humour, his unrestrained pride in his now grown sons’ baseball teams, and his boundless wonder from the cockpit of his plane.

But what made Halladay so essential to Blue Jays fans, and the thing we’ll hopefully never forget, has nothing to do with any of the success. Instead, it has everything to do with integrity, poise, and determination. What made “Doc” was all the losing.

Before that playoff no-hitter, the closest Doc ever came to the feat was in the last game of 1998, in his second career start. With two outs in the ninth inning, the twenty-one-year-old rookie stared down baseball history: the greatest pitchers on earth spend their whole careers striving for a single no-hitter, and here was Halladay, about to do it before fans had even learned his name. In the batter’s box stood Bobby Higginson, determined not to become a historical footnote. The Detroit batter succeeded, lining a pitch over the left-field wall for a home run. Halladay’s no-hitter was broken. Still, the Blue Jays won 2–1, and everyone was excited about the rookie.

He followed that up with a decent season in 1999, but then, in 2000, he couldn’t get anyone out, and was demoted to the minor leagues, and then demoted again, and eventually was told to stop pitching altogether. He thought about quitting baseball, about going back to school. Instead, with a push from his wife, Brandy, he rebuilt his mechanics, starting from the beginning: practicing without even holding a ball. He told his dad, a pilot, that he’d do whatever it takes to get back, and he meant it.

Soon, he was once again pitching with the Blue Jays, and a remarkable run of dominance began. For most of the 2000s, he was the best pitcher in baseball, at times chasing only his own impossible standards. His greatness was all encompassing: he was physically dominant and strategically cunning. He was the game’s hardest-working player, with pre-dawn workouts that became legendary. He was curious and self-effacing but unflinchingly confident. He was singularly driven but had a family first perspective rare amongst young athletes. It never quite seemed that greatness was his goal. Rather than a subjective desire, it was something more basic he was after, something closer to perfection.

But surrounding his genius on the field was mediocrity and, often, ineptitude. A starting pitcher influences only one in five games, and the Blue Jays could not, or would not, build a team capable of winning in the other four. In 2002, Halladay was wonderful, piling up a record of 19–7. In games Halladay didn’t pitch, the Blue Jays slogged to a record of 58–70. A franchise can only dream of a gift as generous as Halladay—maybe the best player in the world, a dutiful role model, and a man so allergic to his own perception that he’d once refused to be the game’s highest-paid pitcher. That the Blue Jays had potential and squandered it, for nearly a decade, is one of the great shames in the history of Toronto sport. No one would’ve blamed him had he become disgruntled or had he asked for a trade. Instead, Halladay worked harder and became better, even though it was all so clearly hopeless. No matter how much better he became, or how many All-star appearances he’d pile up (eight by the end of his career), the Blue Jays, his Blue Jays, would still be losers.

Halladay spent his best years pitching for a team that couldn’t win, in a city far from the spotlight of American media. He deserved better and so did baseball. When the Blue Jays eventually traded him to Philadelphia, a team capable of winning the World Series, it was a public service.

If American baseball was initially robbed of Halladay, diehard Blue Jays fans recognized their luck. The benefit of nobody watching your team is that you get to keep your stars to yourself. He was all ours. His legend, though, was of an unusual kind. While he was adored by true believers, Doc never seemed to be truly embraced by the city, in the way of a Doug Gilmour or Roberto Alomar. That was partly because his teams were so unremarkable, but largely because, other than his early career collapse, Halladay was completely unrelatable. Sure, he was humble and a family man. He could also be affable and occasionally goofy. More often he was aloof to the point of seeming cold. Famously, he wouldn’t speak on game days—not even a hello to a reporter in the hall. He seemed to be a man at once completely immune to the pressures of the sport while completely consumed by his pursuit of perfection. What makes an athletic hero relatable is their faults and stumbles: those moments they could just as easily have been one of us. Doc never could have been. In his time in Toronto, Halladay only truly faltered that one time, in 2000, when everything fell apart. But the recovery was so elegant it was its own triumph. A city turned to its star and saw something completely unreachable. Something to be revered but not something we could ever hope to or, knowing the work it took, want to achieve.

Even in his pitching style were quirks that are difficult to understand. While most pitchers dream of the glorious strikeout—and the surgical authority associated with it—Halladay instead would induce weak contact. He wanted a batter to see hope, to visualize success, only to find himself grounding into a lazy out. It is what makes the final at-bat of the no-hitter against the Reds in 2010 Halladay’s masterpiece. Strikeouts, Halladay knew, were inefficient: why take three pitches to get an out, when all you need is one. But there was something more sinister in this strategy, even if it was unintentional. By including the batter in his own demise, the humiliation is more complete.

For years we watched him, and we never came closer to a unified theory on his contradictions. Halladay, the doting father and loving friend, and Halladay, the determined killer, stood in stark contrast. Somewhere, one fed the other. It’s unclear if we ever figured out where.

When Halladay finally retired, three years after his no-hitter, it was at least a year late, probably two. His once ninety-five mph fastball was now floating more than ten notches slower. Blue Jays fans used to his unabating brilliance watched from afar, waiting for him to recover, willing it to happen. There is a tremendous sadness in watching a baseball player struggle with age, smart enough to agonize over the defeat of his body. His uncompromising desire for control made useless by an arm that just didn’t have any pitches left. He’d try to work around it, only to learn there would not be another revival. But Halladay liked to finish what he started, so he did.

He took this attitude into retirement. His social media chronicles a man relentlessly seeking the things that make him happy: his family, his plane, and baseball. Joy is plastered on his face everywhere it appears: a sight unusual to anyone who watched him on a baseball diamond. This past Sunday, he tweeted a picture of himself with his Little League team, championship trophy clutched by a preteen. “I Love the Players and Parents of the Florida Burn!” he captioned the photo. In it, he is surrounded by perhaps the thirteen luckiest young ballplayers in America, but Halladay’s smile says he thinks he’s just as fortunate. “They keep proving why they’re the best team on the field but more importantly the classiest!” Keep scrolling and you’ll find endless photos of him and his plane and, more importantly, him and his sons. Halladay has made his love for the Blue Jays clear, saying in retirement that he wanted to wear a Blue Jays cap in the Hall of Fame, and he adored pitching in the major leagues. But in leaving Toronto, it seems, and leaving professional baseball, he was finally relieved of his homemade millstone. When he no longer had himself to chase, he could instead search for happiness.

It seemed as if Halladay took lessons from everything he did, successes and failures, but most of them came back to two pillars: love and hard work. These things were eternal. Perhaps, they explain everything we need to know.

The Decade in Us 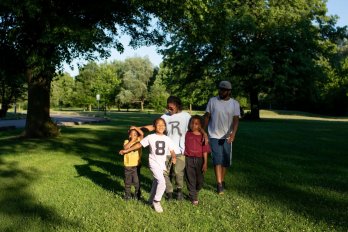 Aren’t Public Parks for Everybody?

Nathaniel Basen is the founder of Pastime, an online sports magazine.
X