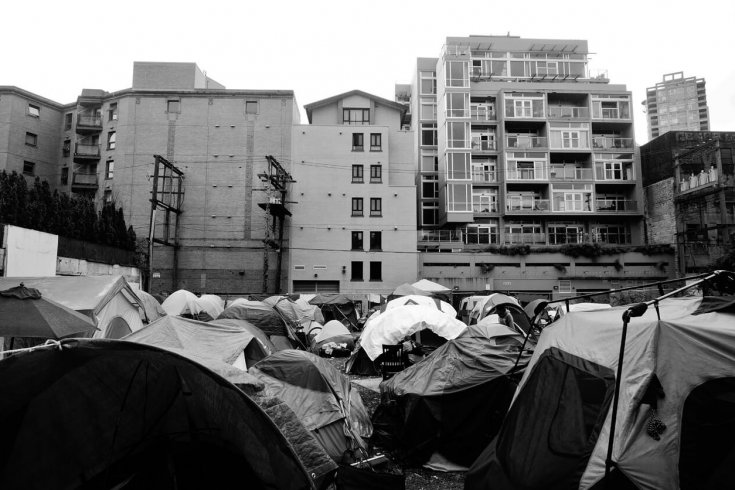 When Samona Marsh returns to camp after work, people flock to her for help. She is one of the six main organizers at Vancouver’s 58 West Hastings tent city, which she currently calls home. “It’s not an easy job, even just being down here some days,” she says. She compares her role to that of a parent for 140 people in the camp, all of who are living in poverty, many struggling with addiction and complex health issues.

In a vacant city-owned lot that’s covered in artificial turf and woodchips in Vancouver’s Downtown Eastside, seventy-two tents (most sleeping two people) are packed into an area about half the size of an NHL hockey rink. The camp is operating at full capacity; Marsh turns away people daily.

Twice a day, the residents of the camp meet to discuss any issues or changes at the site, with a fire marshal and a member of the Vancouver Police Department often attending. Support workers from the nearby Vancouver Area Network of Drug Users (VANDU) are helping the camp with daily logistics and media communications but for the most part the camp is organized by and for the people who live there.

Amidst the backdrop of a white-hot real estate market and a vacancy rate hovering just below 1 percent, this tent city is not just a political occupation but also a community building effort. The camp was formed by VANDU members who decided to ramp up their tactics for protesting housing justice. “The organization has done a lot of marches in the past two years, and after the last one there was an assessment that basically the powers that be don’t really give a shit if we march in the street,” says VANDU employee Aiyanas Ormond.

In early July, VANDU members and other housing activists marched through the streets of Vancouver’s Downtown Eastside and arrived at the vacant lot at 58 West Hastings—the same spot protesters used for the 2010 anti-Olympic tent city. Largely vacant since 2008, neighbourhood resistance has so far stopped condo construction on the lot. What will go up instead was still unspecified despite nearly a decade of residents demanding welfare-rate social housing.

Loud conversations erupt at any hour, day or night, and some campers complain that noise makes it hard to sleep. Tent city resident Jason Duncan says despite the noise, the camp remains his best option. “It could be a lot worse,” he says, while preparing a packet of instant noodle soup in a wide mouthed water bottle using hot water from an old plastic kettle. “I could have no tent and be sleeping in an alcove somewhere and getting kicked by cops every morning. I spent a winter one time, or multiple winters, in an alcove on Granville Street. That sucked.”

Duncan is on disability support and says he lost his last apartment when one roommate moved out and he and the other roommate couldn’t afford the difference in rent. He says he’s living in the tent city because the shelters in the area are full, but hopes to find an apartment to move into as soon as possible. The protection the camp affords, the safety in numbers, makes up for the inconveniences of noise and occasional theft of personal belongings. Still, a chain-link fence surrounds the site and the entrance is monitored twenty-four hours a day by camp volunteers.

While the majority of campers are homeless, some do have places nearby in assisted living and single residency occupancy buildings. Marsh has a place in assisted living nearby, but describes the managing style as too paternalistic. “It’s like you’re treating me like a kid, but I’m an adult and just because I can’t find adequate housing doesn’t mean I don’t know how to brush my own teeth,” she says. While she recognizes that assisted living is a good fit for some, she wants the lot on Hastings to be filled with social housing at welfare rates. In other words, homes where residents have more freedom in their space than in assisted living.

Similar desires for autonomy over housing were also present in Victoria’s Super Intent City, where approximately 150 people called home for nearly ten months this year. In August, the provincial government dismantled it after a BC judge decided the camp was unsafe for both campers and neighbours. Housing activist Ashley Mollison says that even when the government offered extra spots in temporary shelters in January, many people declined and opted to stay because having a community and their own space—however precarious it may be—was more appealing than having a roof over their heads.

Mollison also points to the energy that residents gained from not having to pack up and move to a new place every day. (Victoria’s city bylaws say that people can sleep in parks but are required to dismantle their camps every morning) That combined with living together in a community, where people would watch each other’s belongings, meant that some residents were in a better position to access social services.

Ormond says most homeless camps on the west coast haven’t been part of an intentional social movement. “The tent cities are frequently an organic response of homeless people to their conditions and an attempt to survive,” he says.

But there are exceptions, he says, such as the one that sprang up in opposition to the 2010 Vancouver Winter Olympic Games and the 2014 camp in Oppenheimer Park where campers articulated connections between homelessness and colonialism in their housing demands.

But for the most part they arise from less explicitly political origins. There have been many tucked away, such as Freedom Camp on Salt Spring Island in 2004, which had few tangible results. Meanwhile those in major centres such as Surrey, Abbotsford, Maple Ridge, and Victoria have brought homelessness into the spotlight and achieved varying political gains, sometimes only ending when governments can finally offer alternative accommodations to the campers.

Regardless of whether a tent city is explicitly political or if it achieves long-term gains, tent cities offer a sense of community and relative stability. Staying somewhere long enough to know your neighbours makes falling asleep a little easier. Eating regular meals with people you consider family is fulfilling. Having a centralized community is powerful, and empowering.

Between 2002 and 2014, homeless people in the Metro Vancouver region more than doubled from 1,121 to 2,777, representing 0.31 percent of the population, higher than most cities in Canada. But experts say it’s a shaky conclusion to say there are more tent cities simply because homeless rates are higher. Carey Doberstein, assistant professor at UBC whose research focuses on policy and homelessness, suggests tent cities are more common on the West Coast because of the milder climate. He also says there’s been a snowball effect—that the success of tent cities has inspired more tent cities.

Indeed, some tent cities have done more than create a sense of belonging for the residents. A BC Supreme Court decision in October 2015 ruled that campers at an Abbotsford tent city should be allowed to pitch tents in parks at night—meaning that bylaws prohibiting camping in municipal parks across the country can be challenged as unconstitutional.

Some say that Victoria’s Super Intent City was a political victory. The camp remained operational for many months during which time the provincial government sought court orders to shut it down. In the final ruling, the city was required to offer an alternative housing option to all residents before it could be dismantled. And in Vancouver, the campers at 58 West Hastings had preliminary success: at a community meeting in the Downtown Eastside in August, mayor Gregor Robertson agreed to put up 100 percent social housing on the lot. But that will take years.

In a gentrifying neighbourhood where residents can’t find one-dollar coffee like they used to, the tent city at 58 West Hastings brings dramatic visibility to the sometimes-invisible nature of homelessness. If it is eventually shut down, the residents won’t just disappear. But where will they go?

Tessa Vikander (@TessaVikander) has written for the Georgia Straight and VICE.

The Fight to Save Public Transit

When Cities Are Built for White Men

Why It’s Impossible to Buy a House