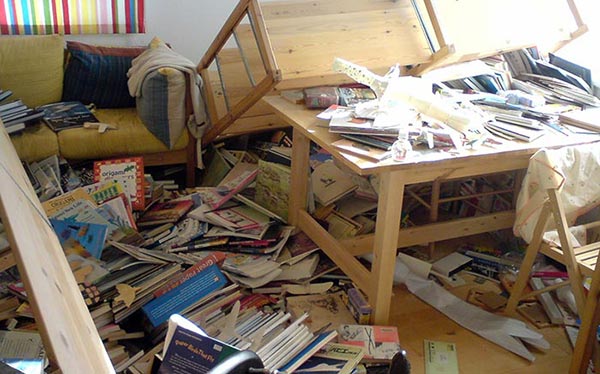 At 2:46 p.m. on a Friday afternoon in Fukushima, Japan, Andrew Dewar was sitting in his office at Sakura no Seibo Junior College. It was the day before graduation, and he could hear his students rehearsing above him in the third floor auditorium. Then, from nowhere, the room started shaking. It stopped after a few minutes, only to start again. The second time, it lasted five minutes.

Earthquakes are part of life in Japan. There are about 1,500 of them each year. To feel the ground and walls shake is usually no cause for alarm, because most are either short tremors or have no real impact. But this quake was different. The room started moving. Dewar’s office shook to the point of collapse; his books, shelves, and walls were thrown about like confetti. Nothing was spared.

Dewar hails from Toronto, where he studied journalism at Ryerson University before earning a master’s degree in library science from the University of Toronto. That afternoon, the fifty-year-old professor had been alone on the second floor. Before he headed outside, he heard a TV news broadcast blurting from a nearby office: a tsunami had hit the mainland. He halted his run down the stairs to watch the report.

“I saw this wall of water going past the camera. It was a pretty big tide,” Dewar tells me, over the phone from Waterloo, Ontario, where he, his wife, and three young children now live. “Then I saw planes from Sendai Airport floating by the camera and thought, this is really bad. I didn’t know how to react. It was all very apocalyptic.”

After hearing his students were safe, Dewar finally made his way to street level, fearing the worst. At first, city life didn’t seem bad: cobblestones had fallen from houses; structures were broken, but not crushed. Nothing was blatantly disastrous. An eighty-year-old wooden convent building, located close to his home, had shaken like a tent, but was still standing. The Internet was working, but he could only send messages, not receive them. “Usually, after an earthquake, things go back to normal after a few minutes,” Dewar explains. But that day was far from normal. Later that afternoon, a postman on a motorbike weaved through the rubble and loose bits of concrete to deliver Dewar’s mail. However, it would take a month to restore water to a city that had been plunged into darkness.

* An earlier version of this post misstated the disaster’s death toll; the phrase “tsunami disaster” has been clarified from “Fukushima disaster.” The Walrus Blog regrets the errors.

It’s been more than two years since the tsunami disaster killed almost 16,000 people* and afflicted a million more. The catastrophe’s March anniversary was a time to remember lives lost, but also to re-evaluate the Japanese government’s mismanagement of radioactive fallout from the nearby Fukushima Daiichi Nuclear Power Plant. The government has failed on many fronts since the earthquake hit, but most notably in its refusal to inform its people, truthfully, about the vast amounts of radiation that have escaped the plant’s dilapidated reactors. Even some eighteen months after the devastation, there were still reports of radiation seeping into the ocean around Fukushima. Another failure: how the government neglected the aging, ailing plant before the earthquake hit, despite widespread reports of its disrepair. Had Daiichi been serviced—or better still, shut down—on time, could the mess have been avoided altogether?

On the evening of the quake, Dewar recalls, aftershocks opened new cracks and widened existing ones in the walls of his residence. His family collected their futons and made a communal area in their dining room. They slept with their shoes on, ready to run.

The following day, Dewar’s family monitored the local news while they cleaned and tried to restore their home. Fears of radioactivity stopped them from going outside for supplies. From TV, they learned that the tsunami had torn important equipment off of the Fukushima plant’s forty-year-old reactors. Already, the situation seemed to be out of control.

On the morning of the second day, Dewar recalls, thick smoke started spewing out of the plant. Radioactive steam and black particulates clouded the air, blowing away from land and out to sea. Then the wind changed, pushing the fallout back toward the city. Rain started to fall. The family gathered a few key items, hopped in their car, and left.

In the days that followed the Fukushima quake, more than 500,000 foreigners fled Japan; Canadians represented nearly a third of that group. At first, there was no easy way out of Fukushima. All major roads were blocked; the bullet train was stuck in its holster. There were only twenty-five gas stations open to service a population of more than 300,000 people. The queues were so long, it took some people two days to fill up. Dewar managed to put a tank of gas in his car, then got out a map and found the most plausible route to safety: a regional airport west of the mountain ranges adjacent to Yamagata. After making the drive, the family flew to Tokyo, where they waited two more days for a flight to Canada. By then, Fukushima had been dubbed the biggest nuclear threat since Chernobyl.

Since 2011, the Japanese government has chosen to rebuild Fukushima’s local economy and invest in infrastructure, rather than properly fix a nuclear disaster that has kept its people on tenterhooks. Area residents still walk around carrying their own Geiger counters. There are interactive maps and iPhone apps that reveal high levels of lingering radiation. More than 160,000 residents of Fukushima are still living in shelters, unable to go home. Meanwhile, prime minister Naoto Kan has done little to protect the public good.

And so skepticism has risen about Japan’s government and mainstream media. Foreign correspondents like the New York Times’ Hiroko Tabuchi have reported what local media have glaringly missed. In her articles, Tabuchi has taken aim at Kan’s government for its “failure to communicate clearly and promptly about the nuclear crisis.” For example, during Japan’s official one-year memorial for its tsunami-earthquake victims, Emperor Akihito’s speech—which included the words, “We have to overcome the problem of radioactive contamination, which is a formidable task”—was nixed from local broadcasts.

Since then, many residents have moved back to nuclear zones without confirmation from local officials whether it’s safe to be there. Ambiguous media reports, cloudy government messages, and conflicting health prognoses have led some of Japan’s population to believe there is no nuclear crisis. When the World Health Organization released its assessment of the Fukushima disaster this past February, the report concluded that there are no anticipated increases in cancer rates either inside or outside of Japan due to leaked radiation. (Greenpeace slammed the report, claiming it was inconclusive.) Scientific American almost agreed, reporting that most residents were not affected by the radiation because of wind direction, though small pockets of the population located near hot spots could see potential cancer risks. On the opposite hand, some publications, such as the Guardian, have reported that a rise in cancer is expected.

Now, after two years living in Ontario, Dewar and his Japanese-native wife have been offered new jobs in Japan. They are moving back to teach library science at a university located 500 kilometres from Fukushima. They won’t be returning to the place where Dewar spent twenty years living the good life: parts of Fukushima have become ghost towns, with strewn rubble, collapsed store fronts, and abandoned roads leading nowhere.

“I have nothing but good feelings about Japan,” Dewar tells me. “But people in Fukushima pretend this event never happened. There are radiation fears. Moving back there, I’m not sure how long I could keep up the charade before I couldn’t live there anymore.” 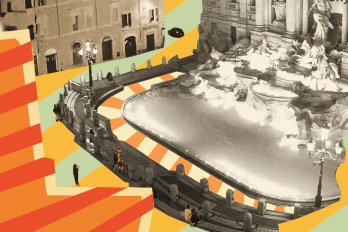 Travelling the World, One Webcam at a Time