Remembering the Halifax Explosion | The Walrus
Skip to content 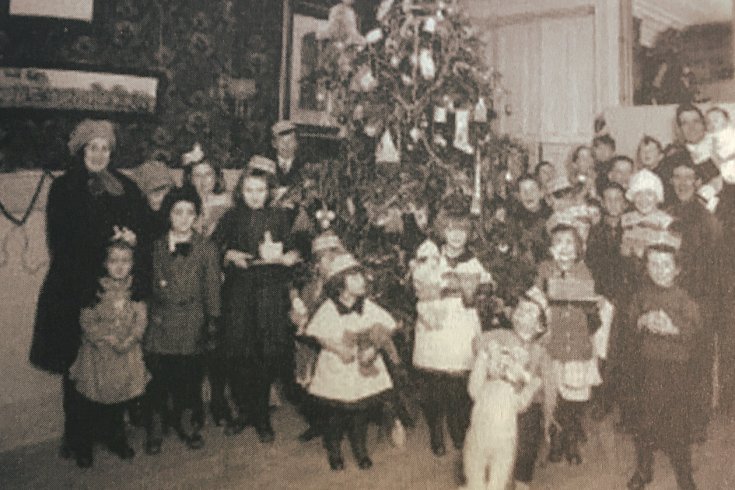 During the holidays, hospitals and shelters took in many children left homeless after the explosion. Ross Dunn

On December 6, 1917, the Imo, a Belgian relief ship, accidently struck the French ship the Mont-Blanc in the Narrows, a thin waterway between Bedford Basin and Halifax Harbour. Unbeknownst to most people in the vicinity, since the Mont-Blanc wasn’t flying the proper flag, the ship was carrying 2,300 tons of picric acid, 200 tons of TNT, ten tons of gun cotton, and thirty-five tons of benzol.

The Mont-Blanc caught fire and started drifting toward Pier 6 and the northern Halifax community of Richmond. At 9:04 a.m., the ship exploded in the largest man-made explosion before the atomic bomb was dropped on Hiroshima.

Two thousand people died from the blast itself and from subsequent tidal waves and exposure to the elements, while another 9,000 were injured. A large section of Halifax’s north end, roughly 2.5 square kilometres, was obliterated, along with the First Nations community of Turtle Grove on the opposite side of the harbour. Other areas, including Halifax’s South End neighbourhood, parts of Dartmouth, and Africville, an African Nova Scotian community along Bedford Basin, sustained damage.

Later that morning, Toronto Daily Star readers were told Halifax was “wrecked,” and hospitals were overflowing with patients. One-fourth of the city “lay flat,” as flame and smoke filled the air. The Omeneca Miner from British Columbia described the scene as a “morgue,” with an estimated 5,000 dead, and the Redcliff Review from Alberta said Halifax was “almost in ruins,” with hundreds dead and many buildings on fire.

For some caught in the firestorm, there was no time to react or run away. Out of the 2,000 who died, 482 were under the age of fourteen and 242 under the age of five. In total, children represented 30 percent of the casualties from December 6.

The Halifax explosion affected entire generations. Survivors not only lost friends and siblings, but would forever carry the physical and mental scars of that day. As newspapers rushed to print information, stories of tragedy and survival changed as the days went on, amid the confusion, to form a picture of a developing event.

As the explosion was occurring, Mary Knaut, matron of the Halifax Protestant Orphanage at 1274 Barrington Street, ushered twenty-one children and several staff into the building’s basement. Knaut, fearing the city was being bombed, took her charges to the safest place—or that was what she thought.

On December 9, the Halifax Herald noted that due to the diligent effort of one father to find his children, a few survivors from the orphanage were discovered. John Howard, a soldier, had scoured both the wreckage and the city for five of his children who had been staying at the facility for a few days. According to official records, Howard was a widower as his wife, Bernice, had died in 1912.

On Saturday, December 8, he managed to track down three of his children—Katie, Austin, and Stella—but his son John, commonly called Jackie, and Raymond were still missing as of December 11. Raymond would be located after a few more days of searching, but eleven-year-old Jackie had died at the orphanage. Howard was also able to find five other children who had been placed in the orphanage’s care, but neither their names nor any information about how they had managed to survive was given to the newspapers.

Records show that twenty-four children and three staff members died, but some reports said twenty-one children and an unspecified number of staff, including Mary Knaut and assistant matron, Ethel May Melvin, died. The Halifax Herald noted seven children were survivors from the orphanage, while a list of possible survivors was in the December 11 Morning Chronicle and Daily Echo. Included on the list were Clarence Ross, Gertrude Reid (Cook), and Teresa Lancaster, who was thought to have left the orphanage of her own accord but had not been found yet. The note about Teresa would prove to be wrong, as her body was never identified or found and she was officially listed as missing, having last been seen with an unnamed woman.

The seven survivors listed by the Herald may or may not have included five-year-old Isabella Robertson. Her father, Duncan Robertson, described her as a “fair-haired” child and thought she had survived based on a story he was told the previous day by Stella Howard, one of John Howard’s children. Stella recalled seeing Isabella in the playroom during the explosion and said that a soldier managed to rescue her and one of Stella’s siblings. She did not know what happened to Isabella after that. No one named Isabella Robertson is listed among the dead in the official records. However, a five-year-old named Elizabeth Robertson who was at the orphanage is listed as having a father named Duncan. It was thought she had been taken away in a car following the explosion. She is listed in the Halifax Explosion Remembrance Book as one of the deceased, as her remains were not found.

The story of the orphanage and its children didn’t stop with the Howards and the Robertsons. A few days after the explosion, a pale, grief-stricken man was reported to be standing outside what remained of the building. He knew what had happened but could not bring himself to acknowledge the probable truth. The unnamed man’s wife had died a few months previously, leaving him with three young children. Unable to care for them on his own, he had, only a week before, put them in the orphanage’s care. Now he did not know whether they were dead or alive, but it was reported he clung “desperately to hope that something may be learned touching on the fate of his little folk.”

There were others looking for orphanage children, and they were using whatever means they could to find them. A notice from the Daily Echo on December 10 asked anyone with information about any of the children to “kindly communicate” with Mrs. H.W. Cunningham on Cornwallis Street.

Standoff at 1492 Land Back Lane

Therapy for the End of the World