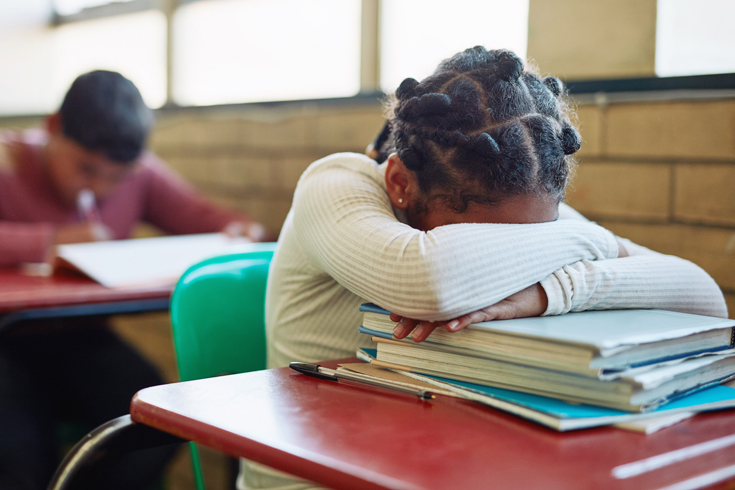 Eight years old, I am sitting near the back of the grade-three classroom of my suburban Toronto elementary school. My desk is close to the window, and I am easily distracted by the birds; one particular bird preens itself on a branch, its feathers shuttering up and down. I am not paying much attention to what the teacher is saying. We’ve been reading a book out loud together and I haven’t been asked to read. I feel off the hook, set free to daydream. A few minutes into daydreaming, I feel a change of tone in the teacher’s voice and the class goes quiet. I snap out of my reverie. There’s a question in the air. I look around at my classmates, who are looking at one another in search of an answer.

“Anyone know what that word means?” the teacher says.

Oh, I think, I’d better pay attention because there’s a new word and I will need to know it.

“Does anyone know what Negro means?”

Good question, I think. What does that mean? I continue to look around at my classmates to see if anyone is going to come up with the answer or even a guess. The teacher seems anxious; this word has weight. Kenneth Percy puts up his hand. The teacher invites him to speak.

“Yeah, Tessa,” he says as he points toward me at the back of the room.

Everyone in the class turns to face me. I freeze, my mind goes blank, and all that is going on in my body is a low fizz, like a misfiring electric circuit.

As I now realize, my teacher tries to rescue me from something she herself sees as a slur, a word that is fine in a book but not in person. “Oh no, not Tessa,” she says to comfort me and all who might worry about what is in their midst. The other kids continue to stare at me.

Doing her job as the class’s moral compass, she thinks fast: “No, Tessa’s something else.”

The misfiring electric circuit spews shocks through my cheeks, my arms, and my legs, which begin to shake.

I have no idea what she’s asking. I feel as if I’ve failed a major test. I should have been paying attention, I should know how to answer this.

“You know, people are certain things,” she says, still trying to help but wounding me deeper and deeper with every second she allows the class’s eyes to remain on me. “Things like, say, Mexican . . . ” She waits, but I have nothing. “Brazilian . . . Filipino . . . ” she carries on, offering possibilities she sees in my face, but in that moment, I hear only words that describe all the things that everyone else in the room isn’t.

She waits, the circuit hums, and it becomes so unbearable that I fold my arms on the desk and put my head onto them. I go away, deep inside myself. I don’t remember where I go or for how long, but when I look up again everyone in the class has gone to recess and the teacher is wiping the board. She doesn’t try to speak to me as I get up from my desk and leave the room, heavier now, saddled with something corrosive.

There, with my head in my arms, I learned that I could disappear; I could become invisible. I wondered why the teacher had not asked anyone else in the class the question, why my best friend didn’t have to answer it. I kept these questions and my invisibility to myself.

I understood, without being able to articulate it, that language had the power to change me completely with the utterance of one word. I had known what black was—our extended family and friends were an array of shades—and I had known where I was from, but that wasn’t what I had been asked. Negro was a word like species, a scientific word that clever people knew but I didn’t. I began to pay attention to the power of words. In being asked what I was and realizing I did not know, I set off to find out. I believe it was the moment I became a writer.

It’s March. The London winter has been harsh—snowstorms, icy pavement—nearly like a Toronto winter, where this year the freeze did not let up, with ice storms right out of disaster movies. Here at my desk, I’m appreciating how much brighter it is at this time in the evening, a sign of spring. But a conversation with my elderly mother today has unsettled me.

“Things are bad,” she said over the telephone from Toronto. I asked her what she meant.

This time, I knew what she meant without having to ask: the anger, the cruelty and violence, in the streets, on our screens. My mother is highly intuitive, overly sensitive, porous to the people and events around her, and a good barometer of others’ intentions, nasty or good. She has always been a glowing, smiling presence, but recently she has seemed distant. Her short-term memory has deteriorated significantly, and I am now noticing an acceleration of the loss of things further back. A few weeks ago, when I asked her to tell me again the story of my grandmother’s rape, she didn’t remember telling me about it the first time. Perhaps, now in her mid-eighties, she has suppressed the language of rape or war or racism as she tries to remember what she’s meant to do each day. Perhaps the slippery uncertainty of the here and now is more urgent than her mother running through a sugarcane field. Or perhaps my teenage imagination made more of her whispers than was real.

Still, as the stories slip from my mother’s mind, they take a part of my identity with them. It feels urgent to piece them together because no single story of race has defined me.

Race is a story.

Throughout history, people have enslaved others, using vibrant language to justify their actions. Aristotle, who lived from 384 to 322 BCE, described the barbarians, the people enslaved by his fellow Greeks, as “by nature incapable of reasoning . . . [they] live a life of pure sensation, like certain tribes on the borders of the civilised world, or like people who are diseased through the onset of illnesses like epilepsy or madness.”

In stories of war and conquest, “savages” run riot. After centuries of conflict with the Irish, Queen Elizabeth I declared them incapable of civilization, a convenient judgment that absolved her of the many atrocities inflicted upon the Irish by England as it annexed the island state. Ideas of “savagery” persisted through the conquest of Ireland in the 1650s, when tens of thousands of Irish were sent as indentured servants to the English colonies in America and the so-called West Indies. Some English leaders even proposed laws that would enslave the poor in England too.

The poor, the criminal, the savage, the barbarian, the other. How does language make one person “other” to the next? How do bodies become set apart and vilified? How did one question asked of me in a classroom in suburban Toronto engender a lifetime of possible answers?

In the seventeenth century, new narratives of difference were created in order to justify the expansion of the African slave trade into British territories in the Americas and the Caribbean. Who was born to command and who to obey? Politicians and statesmen called upon the highest principles of Western classical philosophy to provide the answers. They cited Greek ideals of beauty and intelligence and created principles of power based on them. The idea of race underpinned the trade in captured Africans to serve thriving cotton and sugar production on English plantations in the Americas. With the expansion of the slave trade and the economies that depended on it, racial difference now needed human classification. In the middle of the eighteenth century, the first published materials of “scientific inquiry” argued that “Negroes” were a separate species from white men and were either a product of degeneration from “original man” or descendants from a separate creation altogether.

In the 1830s, anthropologists measured the crania of skeletons, collecting “evidence” to support the superiority of Caucasian brains over Negro brains, writing the necessary new plot lines to suit their own ends. In 1854, George Gliddon, co-author of Types of Mankind, in which he argued that Negroes were closer to apes than humans, sent a copy of the book to a politician in the US South with a note stating that he was sure the South would appreciate the book as powerful support for their “peculiar institution” of slavery.

Race is a construct, not a reality. It is an expression of power. Still, new stories and new acts of violence every day reinforce the border between black and white so completely that it feels like it will never be open. I worry that this is what my mother senses and that it is causing her to retreat, hurt by the world—taking with her the stories that have formed me.

I am a fragile map of stories told by others, told to myself, and they make up a whole person who has often been divided. Race is a construct, but the consequences of how a culture uses race are real, as is the violence committed against people for what they look like. There is violence in making a border. There is pain in being behind a wall.

A year ago, a good friend from Canada came to visit me in London. He is white and, although born in England, has lived in Canada for many decades—he has never understood my move to a place he escaped because of its deep class division and injustices. We talked about current politics and where we both stood. Both deeply committed to social equality, we do not share the way the world asks us to speak to those beliefs. My race and gender obviously make my experiences different, but my racial hybridity adds a further dimension that allows me to cross some borders and not others.

“You’re socially white, politically black, and culturally both,” he said, and I was surprised at being described so succinctly. I then felt a rising distress about what he meant—that I was fragmented, unintegrated, possibly false and therefore dangerous? He thought he was affirming me, but I felt steeped in shame.

Shame splinters you. For me, it was a biting-into-the-apple moment. In an instant, I understood that I was not what I thought or wanted or projected or hoped. I was thrown out of innocence. Shame is a fall from grace.

Tessa McWatt is the author of the books Out of My Skin, Dragons Cry (shortlisted for the City of Toronto Book Award and the Governor General’s Literary Award for Fiction), This Body, There’s No Place Like . . . , Step Closer, and Vital Signs. She divides her time between London and Toronto.

How Meal Kits Changed My Mind about Cooking