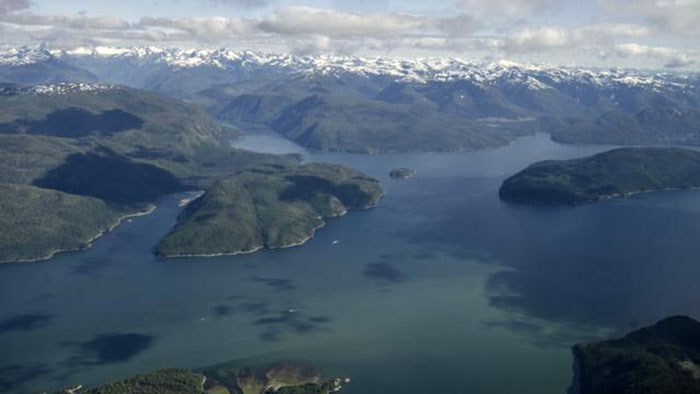 A light tail wind came up. We raised the sails and killed the motor. Instantly, the brrrroop RRRRUUUUUP, bbrrrrrooooowwww roar of a sea lion colony reached our ears. A rocky island 16 kilometres off our port bow was covered in their fat brown bodies. They looked like slugs through the binoculars.

Just behind them, Gil Island.

This was the heart of the tanker route. One day, if we came back here, we might see the iron leviathans coming around Gil on their way in and out of Kitimat, not dwarfing Foxy so much as eclipsing her. The Northern Gateway proposal called for three classes of oil tanker: Aframax, the smallest, averages 220 metres long with a carrying capacity of 700,000 barrels; Suezmax (some classes of tanker are named after the canals they’re designed to fit through), 274 metres long, would carry up to 1 million barrels; and the Very Large Crude Carrier, 344 metres long and weighing 320,000 metric tons, with a capacity of 2 million barrels. It is more than six times bigger than the largest ship yet to call on Kitimat. A VLCC has a two-kilometre turning radius and, when fully loaded without assisting tugs, takes up to three kilometres and fifteen minutes travelling at speed to come to a full stop.

Even so, the thought had crossed our minds that if the weather was always this good, this wouldn’t be such a bad tanker route. If we could sail these waters without incident, surely teams of experienced professionals with vast arrays of modern technology at their disposal could as well. But the sight of green Gil Island dead ahead undermined our confidence. 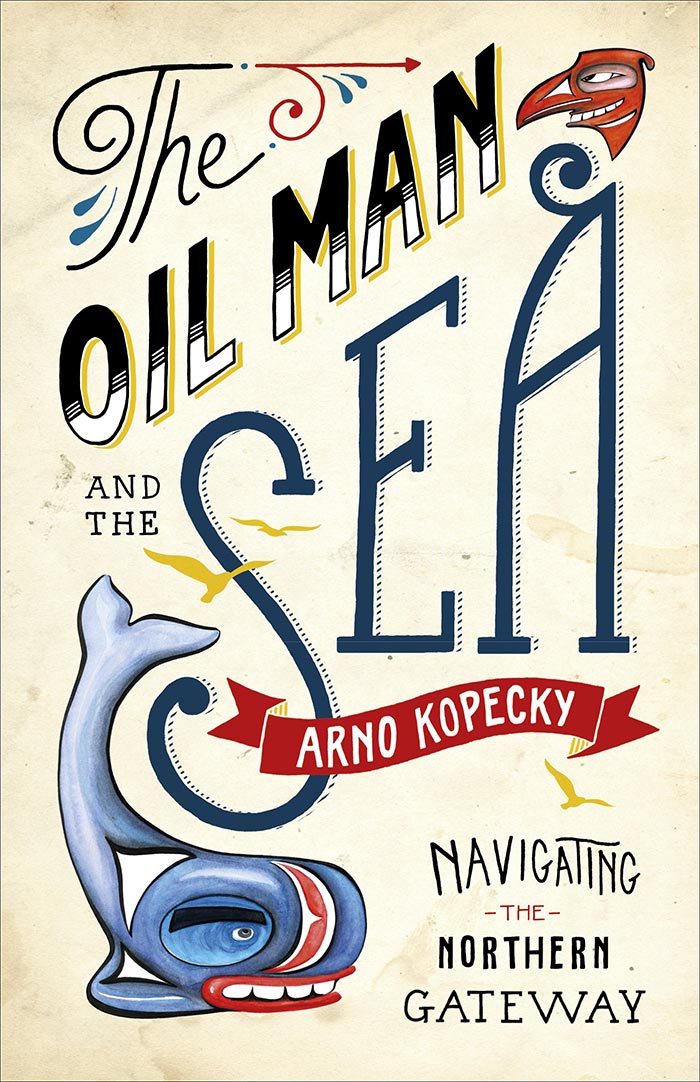 Excerpted from The Oil Man and the Sea: Navigating the Northern Gateway (Douglas & McIntyre, 2013). Visit oilmanandthesea.com for more information.

Shortly after midnight on March 22, 2006, Gil Island sank the Queen of the North. She was the fifth-largest vessel in the BC ferry fleet, 125 metres long and 8,800 tons with room for 700 passengers, though only 101 were aboard that night. They were a third of the way through their trip from Prince Rupert to Port Hardy when their ship struck what happens to be the first obstacle in the Northern Gateway tanker route.

Prevailing winds were 20 knots that night, and a northern squall was blowing through with rain and recorded gusts of 40 knots (just shy of 80 kilometres an hour; “hurricane-force” winds, by comparison, start at 118 kilometres an hour), which was still well within the ferry’s operational limits. There was no fog, no strong current, no waves. The Queen of the North did not go down because of weather.

Nor was technology entirely to blame. The engine and steering system were both running perfectly. The ship’s navigational aids were designed to be redundant, including a global positioning system, automatic pilot, three radars, and electronic charts that displayed her course and position in real time. As the president of BC Ferries said in the immediate aftermath, “There was enough electronic information there that one would think this shouldn’t happen.” And yet it did.

What happened, as pieced together by Transport Safety Board of Canada and the Crown prosecution for the criminal trial that eventually ensued, was this: the autopilot failed and no one noticed. It happened despite, or more likely because of, the fact that the autopilot system was a new one, recently installed and certified by Transport Canada on March 2, less than three weeks before it failed to execute a slight but mandatory two-degree turn where the long straight shot of Grenville Channel opened into the wheel of Wright Sound, with Gil Island directly in its path. The radars, electronic charts, and autopilot each had their own alarm that should have sounded independently of the rest; the sound on every single one of these alarms was deactivated, either during the ship’s recent retrofit or at some point thereafter. Several visual alarms did start blinking, but someone would have had to look at a screen to notice them.

That someone was Karl Lilgert, Fourth Officer in charge of bridge that night, assisted by quartermaster Karen Briker. Being midnight, the captain and the rest of the officers had all gone to bed. Neither Lilgert nor Briker realized they’d gone off course until treetops appeared inside the orb of the ferry’s lights, by which time it would have been too late to avoid the jagged shore even if Briker had known how to turn off the autopilot so that Lilgert could take manual control of the ship, as he ordered her to do. But she didn’t know how (she would later testify that she had never been trained to do so), and by the time Lilgert had crossed the bridge to flip the switch himself and then return to the controls, well…he didn’t even hear the sound that came next and woke up everyone on board, so total was his shock. With her belly ripped open, the Queen of the North took one hour and twenty minutes to sink. During that time, incredibly, all but two of the passengers were hustled out of bed and onto lifeboats. Gerald Foisy and Shirley Rosette, a couple from 100 Mile House in British Columbia’s interior, were never seen again and are presumed drowned.

It came out almost immediately that Karl Lilgert and Karen Briker were former lovers, and that the night of March 22, 2006, was the first time they’d been alone together since Briker ended their affair a few weeks earlier (both were married at the time). These details were sensationalized by the press and incorporated into the prosecution’s case when Karl Lilgert was charged with two counts of criminal negligence causing death. The trial, obstructed for years by the B.C. Ferry and Marine Workers’ Union, finally began in January 2013, seven years after the sinking. If found guilty, Lilgert faced up to life in prison.

The Crown charged that Lilgert and Briker were either fighting or fornicating when the autopilot malfunctioned, and in their state of reckless abandon they hadn’t bothered to check any of the screens that would have indicated the ship was making for a piece of land twenty-seven kilometres long and twelve kilometres wide. Lilgert, who broke down repeatedly under questioning during the trial, pled not guilty. As the officer in charge of the ship when it went down, he accepted responsibility for the disaster, just as he acknowledged having had an affair with Briker; but he insisted—as she did— that nothing untoward happened between them on the night in question. The case hinged on this salacious question, because only if the jury believed that Lilgert’s mistakes were a result of recklessness (fighting or fornicating while people’s lives depended on his vigil) instead of ignorance (insufficient training in the face of extraordinary conditions, as the defense maintained), could they characterize his negligence as criminal and judge him guilty.

According to Lilgert, it wasn’t the autopilot that failed but the radar, its screen going white after he’d deliberately headed off course to dodge first a tug and then a fishing boat that appeared in the ferry’s path. He also claimed that the squall coming in that night was climaxing in Wright Sound at precisely that moment, hurling heavy rains against the windows and pushing the Queen of the North around with greater-than-reported gusts of fifty knots, almost a hundred kilometres an hour—not far off hurricane strength. In addition to pushing the vessel off course, Lilgert said, this sudden storm blotted out the radar. Unfortunately for Lilgert, there were no local weather-observation stations to confirm his estimates of the storm’s strength in that particular location. And no record exists—at least none that the defense could find—of the fishing boat he claimed to have been dodging. No one other than he and Briker saw it, and no one ever came forward as the operator of what the Crown prosecutor called “the fake boat.” The tug Lilgert mentioned did exist, but was much too far away to have forced the ferry to dodge it. Most damning of all, the ship’s version of a “black box,” extracted by submersible (the Queen slid to a resting point some 440 metres below the surface, where she remains today), revealed that in the final twenty minutes of her life, the Queen of the North followed a ruler-straight course out of Grenville Channel and into Gil Island without a single course alteration.

The jury found Lilgert guilty, and sentenced him to four years in jail. But regardless of whether you believed the prosecution or the defense, the Queen of the North’s fate is instructive of the way things tend to go wrong at sea. Quickly, for one. And collectively; every explanation of the tragedy involved a perfect-storm combination of failures in modern technology and human judgment, compounded by at least some measure of meteorological duress. It was also worth noting (as the prosecution did) that Lilgert had sailed this exact route 795 times before in his career with BC Ferries; it wasn’t until the 796th time that everything, or maybe just a couple of things, went synchronously wrong. No one but a novelist could have imagined that night’s particular assemblage of mistakes and malfunctions, and yet the story’s arc is eerily familiar. Nothing makes for a better parable of human hubris than the ship that shouldn’t have sunk.