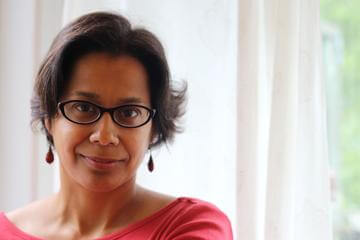 Soraya Peerbaye’s unsettling new book of poems, Tell, is up for both the 2016 Griffin Poetry Prize and the Trillium Book Award for Poetry. In it, Peerbaye conducts her own poetic inquest into the 1997 murder of teenager Reena Virk, by tracing the physical geographies where the assault and killing occurred, and by combing through the documents of the trials that followed. For Peerbaye, Virk’s death is an extreme, but not isolated, incident—a brutal illustration of the kind of teen aggression familiar to many young, non-white Canadians.

If you were to read only the Griffin judges’ citation about Peerbaye’s “[h]arrowing and deeply empathetic” book, you wouldn’t know Virk’s death was a race crime, nor would you understand that seeing it as such is one of the main drives of Tell. Virk was a fourteen-year-old girl of South Asian descent living in a suburb of Victoria, BC, who was gang-assaulted, then murdered under the Craigflower Bridge. Her assailants began by burning a cigarette onto her forehead where a bindi might have been. Peerbaye was troubled by “details that were glossed over in the trials and the media,” and by the fact that the crime was never defined as racially motivated. By reading the details of Virk’s murder through the lens of her own experience as a girl growing up in Canada, Tell addresses the reluctance of many Canadians to admit and name the racism that other Canadians continue to navigate each day.

As a poetic investigation, Tell is not an inquiry into guilt or a quest to lay blame (Kelly Ellard and Warren Glowatski were both convicted of second-degree murder), but a forensics of emotion, a tracing of lines of evasion, of euphemism, of cruelties and humiliations mapped on actual bodies. Tell looks at the brutalities that took place on the shore of the Gorge Waterway with concern, tenderness, and, most importantly, an implied identification with Virk. Peerbaye’s lyric line folds the voices of the trial participants into Peerbaye’s own ruminations. Her tone is as tender as an attempt to undress a wound:

Exhibit 18, the envelope of small stones taken from her throat.
A teaspoon, said the pathologist. As though speaking

How could he see? From the moonlight
glimmering on the water.

Peerbaye’s cadences are delicate and forceful. I think of her sound as like Anne Michaels’—if Michaels wrote not of Jewish children murdered during the Shoah, but of a brown girl murdered in Saanich, BC. That soft tone works; preciousness, in Peerbaye’s telling, is the exact thing that wasn’t allowed to Virk.

Without tipping into sentimentality, Peerbaye manages to bring extreme gentleness to her consideration of Virk’s drowned body, and she extends that tender attention to the muddy, grassy shoreline of the Gorge Waterway. Echoes of the Canadian naturalism exemplified by Don McKay, Tim Lilburn, and John Steffler, and of the cultural map-making of Daphne Marlatt and Fred Wah, are all discernable in Peerbaye’s strategy to tie her witness of racial violence to a witnessing of the land. The silt of the Gorge, “thick and brown / with sewage, run-off . . . carrying copper, zinc, mercury, / hydrocarbons in the storm drain,” finds its way into the folds of Virk’s clothing. Peerbaye counters “the diver’s observation / that the body looked untouched by nature” with an inventory of the life in those waters, a reminder that sea tar lichen, otters, parchment worms, soft-shelled clams, and eelgrass all shared the water with Virk’s floating body.

The bold move in Peerbaye’s book is her decision to tell a story of her own girlhood alongside her investigation of Virk’s death. When a writer wants to help a reader feel the loss of a character, the conventional strategy is to have us meet the character, and have us get to know her, before she is taken away. But Peerbaye didn’t know Virk, and the court documents and news stories of her murder don’t help us know Virk. Peerbaye has said that trying to put herself in Virk’s mind and write from her perspective “felt forced and artificial.” The reality that “Reena as a presence is not there to say what happened” was precisely what she wanted to honour and make palpable. So, instead of inventing Virk’s lived girlhood, Peerbaye sticks to the truths she can access: her own.

We take Tell’s subtitle to mean that the poems bear witness to Virk’s lost girlhood, but when Peerbaye’s poems begin to speak in the first person, it becomes clear that the girlhood under excavation is not Virk’s alone. Virk’s body floated for eight days before it was found; later Peerbaye writes of herself having swum in the sea: “Always stepping in to be carried: to be / lifted, tilted and tear-dropped, set down / by swells on toe-tips. To be swayed.” Virk was assaulted by at least eight young people; Peerbaye writes in the first person of hiding bruises left by incidents of “girls encircling me.” Peerbaye imagines Virk trying to fit in: “how she wanted to be chosen—hirsute, dark—as she was,” then writes, “how badly I wanted a boy / to slow dance that song with.” In Tell, Virk is already stilled, already earth. We can only meet her as tissue, as membrane: the inside of her cheek lined with dirt, her throat filled with pebbles, the “watery night against her open eyes.” It is Peerbaye’s body that is alive, and is still able to speak about navigating similar territories, similar dangers.

This kind of move—actively identifying with a Canadian who was bullied and killed in a suburb on Vancouver Island for having a certain skin colour (rather than fictionalizing racism as something that happens once upon a time) is risky. Settler-descended Canadians of all hues love the narrative of our country as a multicultural promised land, a safe refuge. The CanLit taste-makers, still predominantly white, tend to value “immigrant” stories that eventually come around to seeing Canada as inclusive and safe. But in recent years, calls for inquiry into missing and murdered Indigenous women, #BlackLivesMatterTO demonstrations, and surges in public discussions around trans, queer, and women’s safety have all proven that Canadian communities often don’t live up to the ideal for which we like to congratulate ourselves. To identify with Virk, to say race crime happens in Canada, is to challenge a core narrative of our nation, and to court alienation from those who like our core narratives just fine as they are.

When Virk’s murder made the news, the case was said to have thrown a spotlight on the pervasiveness of girl-on-girl bullying. There was, perhaps, a kind of Euro-Canadian generosity in not describing Virk’s death as race-related. “Not seeing colour” is considered a virtue by some; the fact that two assailants were black was enough for the law to read the incident as non-racist. “There was no consideration of how young people of colour could be involved in a racist crime,” writes Peerbaye. “[W]hat do we do with our inability to name this?”

One thing Peerbaye did with that inability was to bring the voice of Cheryl Bryce, of Songhees First Nation, into the poems. In “Narrows,” Bryce walks the shore with Peerbaye, sharing the names and uses of the plants, sharing the traditional Songhees story of the hungry girl, Camosun, who refused many of the foods the spirit offered her, and whose appetites for “duck, herring, coho and oyster” explain their plentiful presence in the Gorge. They walk near the Craigflower Bridge, which was originally built in 1853 to provide settler children access to the Old Craigflower Schoolhouse. “Yes,” Bryce says, she “followed the trials, thinking of the children / in her family, her sister, herself / when she was young. I grew up in this skin.” By adopting Bryce’s vision, Peerbaye acknowledges the human connection to the land that precedes all Canadian naturalist poetries and histories. She not only underscores that the charged experience of living in brown skin in Canada is one that many settler-descended Canadian women share with Indigenous women, but acknowledges too that non-white people can still participate in racially oppressing others.

Tell is a masterful piece of writing worthy of its recognition. Peerbaye’s stream-like movement between voices, between languages, is breathtaking, especially her sounding of all of the etymological notes in the word gorge: its gorgeousness, its throated fullness, its greed, its ecological vulnerability. Her insistence on using French expressions to explore all angles of knowledge lends the book a depth and worldliness that translators will appreciate. Her spare selections of transcript text effortlessly capture the grinding movement of years of testimony: when earlier this month I read the news that Ellard was requesting day parole, I felt I had, in a small but significant way, already met this woman and heard her voice. Moreover, Peerbaye’s respectful work with the court documents around Virk’s murder sit as a powerful counterexample to recent American experimental poetries that have sensationalized legal documents of race violence and perpetuated atmospheres of threat.

When the Griffin judges say that Peerbaye urges “the reader to embrace painful sympathies,” I think they mean that Peerbaye makes the lived unsafety of being brown in Canada accessible to white and non-white readers alike. “I want to be sure / I want to tell / the truth within a lie,” writes Peerbaye. The lie is that Virk’s assailants didn’t, and that Canada doesn’t, “see” colour. In Tell, the Gorge ecosystem—the site of many acts of colonial violence—is the ground under every Canadian’s feet.

Sonnet L'Abbé edited the 2014 edition of The Best Canadian Poetry in English. Her latest book is Killarnoe (2007).