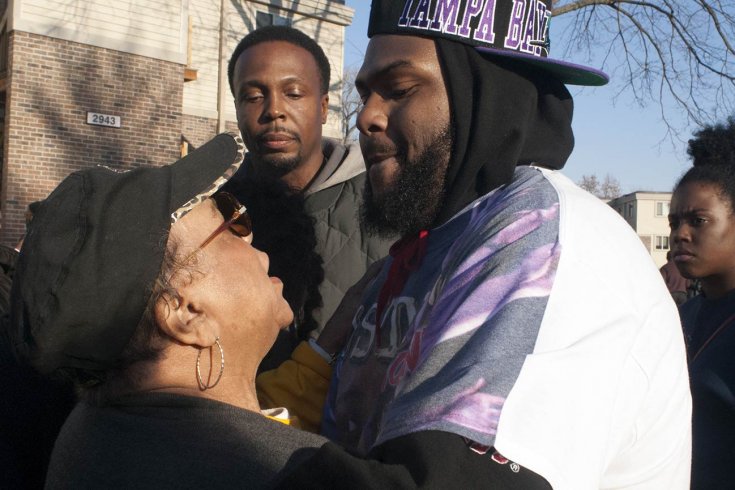 It’s midday on a bright and unseasonably warm Saturday at Washington Metropolitan A.M.E. Zion Church in St. Louis. Local and national leaders and members of the National Association for the Advancement of Colored People (NAACP) are gathering for a special service. Afterwards, they will embark on a seven-day, nearly 200-kilometre march from Ferguson to Missouri’s capital, Jefferson City, where they will demand justice and reform in the name of slain teenager Michael Brown.

The group plans to depart from Ferguson’s Canfield Drive, where Brown was killed by police officer Darren Wilson on August 9. Last Monday’s grand jury decision not to lay criminal charges against Wilson has spurred peaceful protests across the United States (and in major Canadian cities), as well as incidents of vandalism and looting in and around Ferguson.

And now the NAACP is mobilizing significant resources for the cause. “This is a part of a process of not only healing, but of change, and change will come, I guarantee that,” Adolphus Pruitt, president of the organization’s St. Louis County chapter, tells me just before the service begins. When the marchers reach Jefferson City, they plan to make two demands of governor Jay Nixon: first, to remove Ferguson police chief Thomas Jackson; second, to strengthen state laws against racial profiling.

In the meantime, Pruitt cites documented concerns of racial profiling by Ferguson police: last year, 86 percent of local police stops and 92 percent of searches were of black people, but only 67 percent of the town’s population is black. (A recent USA Today report revealed there are nearly 1,600 American cities where arrest and search rates are even more disproportionate than those in Ferguson.) “I know a lot of folks would say that having a high disparity rate, in itself, doesn’t necessarily mean the police department is racially profiling,” he says. “[But] let’s take the other side: why would we have such a high disparity with any particular race, and not want to see that reduced? ”

This service, attended by several dozen people, represents a much older, more male cohort of activists than those I’ve seen on the streets of Ferguson in recent days and nights. Most speakers here reference the NAACP’s role in advocating for social change. Their speeches are steeped with historical and biblical references, and seem to resonate deeply with the congregation.

For example, Rev. William Barber of the North Carolina NAACP draws a powerful comparison between the killing of blacks in modern-day America and the biblical slaughter of Jews at the dawn of Christianity, when King Herod ruled an “out-of-control political and judicial system that was issuing unjust decrees.” Just as the prophet Rachel cried for a slain nation, Barber describes the current situation: “There is a prophetic, necessary weeping and mourning that cannot be comforted.”

Some of that discomfort has found its outlet in riots and looting. Barber confronts that truth head on. “While we strongly disagree with those who would promote violence to deal with violence, there is, as Dr. [Martin Luther] King would say, legitimate discontent, and riots are often the voice of the unheard,” he says. “So we must morally stand against violence, but we must also morally hear the sincere non-violent protest raised by the majority in Ferguson and across the nation, and not turn a deaf ear to what is being said.”

NAACP president and CEO Cornell Brooks follows. The grand jury deliberation that cleared Wilson, he says, was “a criminal trial masquerading as a grand jury proceeding.” It also, Brooks adds, “led us to a certain moral conclusion: that is to say we cannot be satisfied with this injustice, we cannot be satisfied…until Michael Brown and his family have the justice that they deserve.”

On the bus ride from the church to the Canfield Green apartments where Brown was fatally shot, I speak with Rev. Heather Morgan, an NAACP member who has come from Columbia, Missouri to join the march. “It really means the world to me—I’m very blessed to be part of the historic moment that I believe is coming out of Michael Brown’s death,” she says. “This type of incident between the police and a person in the neighbourhood could easily happen on my corner. It’s important for people…to be talking about it, whether we want to or not.”

Two busloads of marchers disembark just before reaching Canfield Drive. They are joined by many others who were not at the church service, including a number of younger faces. The assembly marches in the sunshine, singing “Lift Every Voice and Sing”—a hymn that NAACP freedom fighters have been trumpeting since the organization’s inception in 1909.

A crowd of local residents has already gathered around a makeshift memorial at the spot of Brown’s death. Most residents here seem caught off guard by the procession; many of them are unhappy with the surprise visit. A few area men confront the marchers and demand to know why they are only showing up now, days after the non-indictment—and months after Brown was killed.

A young man who calls himself D Gunn is more vocal than the rest. “Y’all wanna march and talking about peace? That peace shit out the window now,” he yells. “We gotta burn some shit up just to get attention from the white man.”

Another man named Marquise, who is wearing a t-shirt that says “Peacekeeper,” echoes this frustration: “Come out here when we need something! I’m not trying to do this for show. I got people out here that died too.” He insists that West Florissant Street, which has been closed by police for days, has only reopened up for the NAACP’s arrival. “When everybody is gone, it’s gonna be locked, and we gonna be back to martial law down here.”

The anger is palpable. I ask a woman named Bobbi, a St. Louis native who has come to see the memorial, if she understands these frustrations. “I’m angry!” she replies quickly. “I’m mad. You wouldn’t be human if you wasn’t. That could have been my son, my grandson, that laid out there for four hours, shot down like a dog.”

As we speak, the main procession of marchers pays its respects at the memorial. Some pause in front of it and bow their heads in prayer. Although many are gone within fifteen minutes of arriving, already beginning their journey to Jefferson City, a good many stay behind. “I didn’t come down here to talk,” Rev. Barber tells some of the exasperated locals. “I came here to listen.”

He’s not alone. An impressive cross-section of people from all across the country are here in a show of solidarity. Among them is Beatrice X, the aunt of Oscar Grant III, a twenty-two-year-old black man who died after being shot in the back by an Oakland transit police officer in 2009. (Grant’s story inspired the 2013 film Fruitville Station.)

“We go around to a lot of families,” X tells me. “We work with them, we comfort them, because our family has been through this before.” In recent days, she has been involved in several acts of civil disobedience, including the closure of shopping malls, meant to bring attention to Brown’s killing and Wilson’s non-indictment.

Disruptive protest, X says, is about “empowering ourselves.” She introduces me to a young black man named Quincy Shannon from Colorado, who has also been involved in the shopping mall actions. “It’s not about getting arrested, it’s not about trying to incite the police into a riot…it’s understanding that right now, black lives don’t matter,” he says, with conviction radiating from his face.

Shannon wants more Americans, particularly his white compatriots, to consider Brown’s death from a different perspective. “This is the reality of what a black man in America looks like,” says Shannon. “I understand that you may not understand this reality, but I need you to know what I’m living.” He looks over at D Gunn. “That’s why that brother right there got so much pain—it’s because nobody heard his voice.”

This is a popular opinion in Ferguson. A young man named Larry who lives right in front of the memorial site tells me, “I feel like the grand jury felt like Mike Brown deserved to die.” His friend Demetrius Washington, who has lived nearby for the past three years, says he’s loving the diversity of supporters in attendance—black and white, coming from Kentucky, Illinois, California, Texas, New York, and Maryland. He feels quite differently, however, about law enforcement: Darren Wilson, he says, “killed an innocent man who was on his way to college,” before adding that the police “harass us every chance they get.”

After close to an hour, Barber, X, Shannon, and many others have made headway with D Gunn and others. Locals and visitors exchange email and phone contacts. Those from out of town promise to return, and to bring back media and resources to support this community—not only with the aftermath of this event, but with issues of enduring poverty and marginalization.

As visitors leave—some to march to Jefferson City, others to continue engaging in local protests—many embrace D Gunn and those standing with him. Several take a final look at the makeshift memorial of flowers, plush toys, and candles, which has also accrued dead autumn leaves. Beneath it all, splotches of red blood remain visible.

I’m finding it hard to depart, so I continue talking with residents. I meet an elderly gentleman named Ricky who’s holding the hand of a toddler, his great-grandson. Ricky says the anger we are witnessing “is really not gonna solve what has happened to our younger brother Mike Brown, but what it will do is…open up a lot of eyes of what really is not just happening in Ferguson, but is happening everywhere.”

I also meet a black woman named Michelle Buckley who has lived in the area for twenty-five years. She tells me her twenty-three-year-old son is regularly profiled by police in front of their house. “If you go to any of the surrounding municipalities, the majority of the police departments are white,” she says. “But then when you go into one of the courtrooms on any given night, the majority of people who are in there for ticketing and citations are black.”

Buckley hopes the Brown tragedy will cause local black people to vote, and to stand for political office. “We need some stronger and younger voices in the NAACP. It’s great that they came through here and marched, but we’ve got a lot of work to do.”