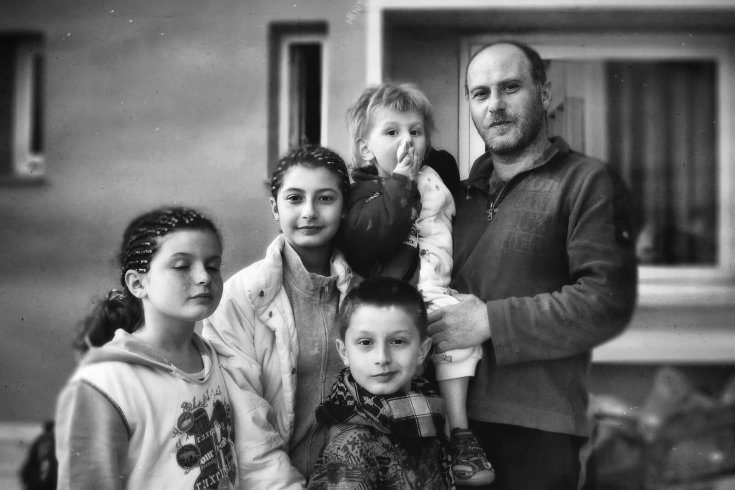 “Yusef was a doctor. Now, he is one of 151 war refugees from Syria that arrived at Chania, Crete after their boat sank in the Aegean Sea. His wife was a pharmacist and with their 4 children they used to live at Homs. They had their own house, they had a car, everyday they woke up in the morning to go to their jobs. Everything changed 3 years ago.”

On May 5, 1939, more than 900 German Jews, having been stripped of their possessions, left Hamburg on the luxury liner the St. Louis with nothing to their names but entry visas to Cuba. Before Kristallnacht they had been part of a successful middle class, but now they were penniless and desperate, refugees thrown on the mercy of the world. The world showed no mercy. On their arrival in Havana, Cuba refused them entry. The US Coast Guard shadowed the boat as it drifted past Florida so that no desperate passengers would try to swim ashore. Canada, the final hope, was a final disappointment. The director of the Immigration Branch, Frederick Blair, refused the refugees of the St. Louis with a bit of reasoning, perfectly Canadian in its bland insistence on orderly policy: “The line must be drawn somewhere.” The Jews sailed back to Hamburg. Hundreds died in Nazi concentration camps.

Canada took less than 5,000 Jews between 1936 and 1939. In a 2012 foreword to a new edition of None Is Too Many (1983), the definitive study of Canada’s history of indifference to the sufferings of the Holocaust, Irving Abella and Harold Troper described the incident as one of exceptional and unusual national disgrace:

It is a sad tale of a Canada which, faced with a humanitarian crisis of unprecedented proportions, refused to offer support let alone sanctuary to those in greatest need. It is a tale in which those who swam against the xenophobic tide were few, far outnumbered by those who decried Canada’s intake of foreigners as a threat to the nation’s economic and social stability.

Abella and Troper went on to make the claim, not unreasonable in 2012, that their book had helped to change Canadian attitudes toward immigration, citing as evidence the massive influx of Vietnamese “boat people” under Joe Clark’s government.

Three years later, Abella and Troper’s judgment of Canada’s openness has been deeply challenged, if not utterly shattered. The historical parallels between the Jewish refugees of the ’30s and the Syrians refugees of now are not exact of course. No historical parallels ever are. One difference jumps out right away. Canada took 5,000 Jews. We have not taken anywhere near that many Syrians.

How could Blair’s Immigration Branch have let those Jews go back to Europe to die? How could a country so empty and so wealthy not have found room and money to settle 907 people? Did they not realize that middle-class educated elites from Europe were going to be exactly the kind of people who would help build up the empty country?

These same questions will be asked in the future about our own time. And we have answers; our leaders do anyway. Just like Mackenzie King and Frederick Blair did, Stephen Harper and Jason Kenney and Chris Alexander declare that we are compassionate enough, the most compassionate even, and that, besides, we have done what little Canada can do. We will help our allies who make all the important decisions anyway. We will use our resources to do our little bit in an immense and unfathomable war over there rather than to bring those people over here. “The line must be drawn somewhere.”

It will hopefully not take seventy years for their excuses to appear as flimsy as their predecessors’. Then we will be ashamed for our indifference and our xenophobia and our narrow vision. We will pay for our disgrace, too. There are 100,000 Ishmaili Muslims in Canada; they include half a dozen prominent writers, several major business figures (including a former CEO of Rogers), and a mayor named the best in the world this year. Can anyone doubt that our much-vaunted compassion, in allowing East African Muslims to settle in Canada, was one of the shrewdest bargains this country ever made? All that human capital was there for the taking. The Aga Khan threw in a museum, to boot. What future Naheed Nenshi are we leaving behind at this very moment?

Our parochialism in time allows us to believe that we are superior to the people who came before us. Grandma says the word “negro” and we snicker. That old Canada—how clueless they were, how prejudiced, what a pack of hicks and rubes. The idea of progress is requirement, for both the left and the right. Things must be getting better. We must be getting better. Or else what is the point?

But if you want to know how national disgraces happen, look around you. It’s us. It’s you and it’s me. It’s your friends and neighbours. It’s the people who just moved in down the street. It’s your family. It’s the Prime Minister, and it’s Chris Alexander, a man whom everyone used to admire. Once paragon of Canadian virtues—brilliant, outward-looking, cosmopolitan—he is letting people die who could live, and for no better reason than the one we have always given. “The line must be drawn somewhere.” The epigraph to his book The Long Way Back (I attended the launch) is a quote from the Prophet Muhammad: “A true believer loves for his brother what he loves for himself.” I suppose that love is always easier in theory than in practice.

Let us remember this moment the next time we unthinkingly condemn the past for its cruelty and its failure. Even the best of us are no better now than they were then. Let us judge not, lest we be judged.

None Is Too Many opens with an anecdote from Auschwitz. The barracks in which the guards stored the purloined riches of their inmates, a place piled high with gold and jewels and food, were called Canada. “It represented life, luxury and salvation; it was a Garden of Eden in hell,” Abella and Troper write. “[I]t was also unreachable.”

Since 1938 we have become a richer country, a more diverse country, a country filled up with men and women from many suffering places. Our disgrace is therefore even deeper than the past’s: Many in this country today would have turned away their own ancestors. And what could be a clearer sign of integration? The national vice is the national virtue perverted. The love for peace, order, and good government has become an excuse not to bother ourselves while the rest of the world falls apart. The Book of Revelation had a warning for those who those who remain neutral in the moment of crisis. “Because you are lukewarm, and neither hot nor cold, I will spew you out of my mouth.” God was thorough: There is a hell for Canadians too.

“The line must be drawn somewhere.” There is a deep urge in this country to leave the world, in all its lousy degradation, well enough alone. None of it is our fault, right? Who wants to be part of the world’s various nightmares when you can go hang out at the lake? Our terrible blindness is ours; we have desired it.

On the edge of the earth, marginal and peaceful and prosperous and free, Canadians may well wish to be excused from history. We may excuse ourselves for now. The future will not.