Conservation and creation are inextricably linked for this Canadian artist

An imposing warrior figure with shield and staff raised appears in the clear turquoise waters ninety metres off the coast of Lighthouse Point, Grand Cayman, nearly twenty metres down. It is the Guardian of the Reef, a four-metre-tall bronze sculpture created by Canadian artist Simon Morris, and it encapsulates the heart and soul of the Cayman Islands in many ways—environmental stewardship, passion for exploration, and appreciation of the arts.

“I designed the Guardian to look very aged and beaten up and the column is sort of shattered,” explains Morris. “The idea is he’s been there for thousands of years, guarding the reef and the oceans, and it’s time we step up and do the same.”

The statue was commissioned in 2014 by Jay and Nancy Easterbrook, then-owners of scuba diving operator Divetech, to celebrate the organization’s twentieth anniversary and quickly became a world-renowned diving destination.

Amazingly, the Guardian of the Reef is one of three enormous bronze sculptures Morris has placed in the Cayman Islands, by commission or request. And he’s far from the only artist the people of Cayman actively appreciate—the National Gallery of the Cayman Islands is a source of pride on Grand Cayman. The expansive gallery has an international collection of art, but specifically showcases the evolution Caymanian artists. 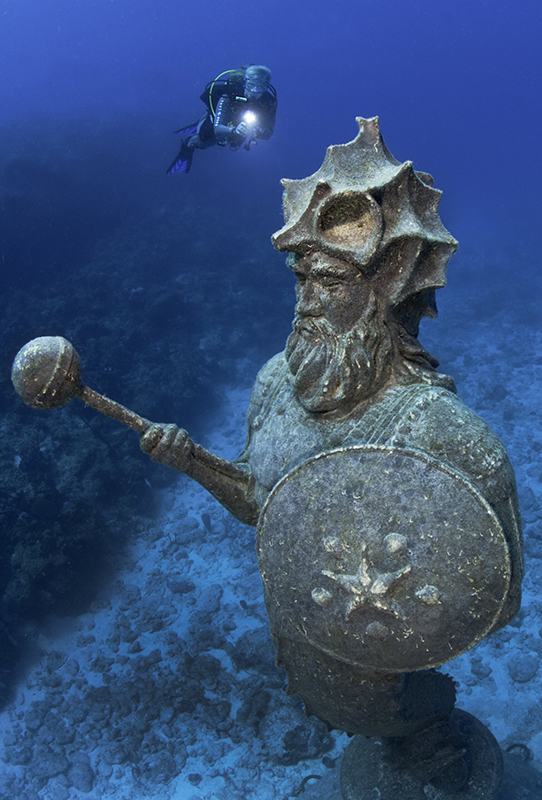 The Guardian of the Reef, by Canadian artist Simon Morris, is one of the many spectacular art installations to be seen – both in the ocean and on land. 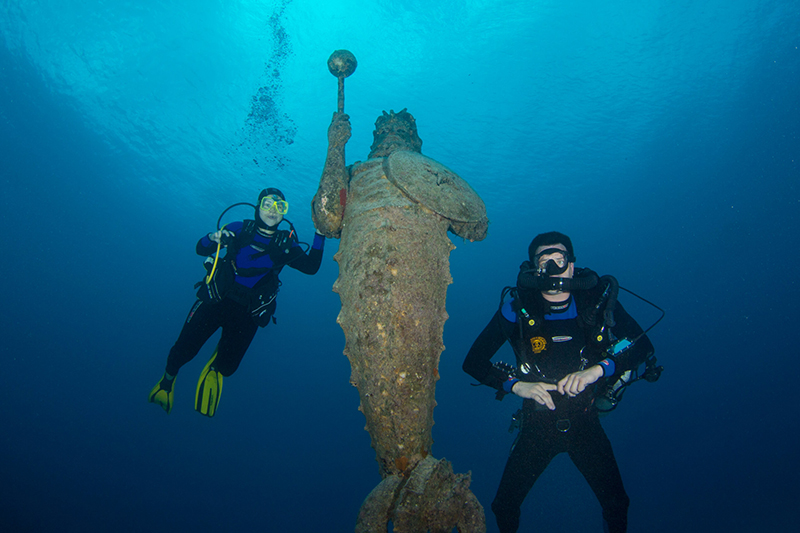 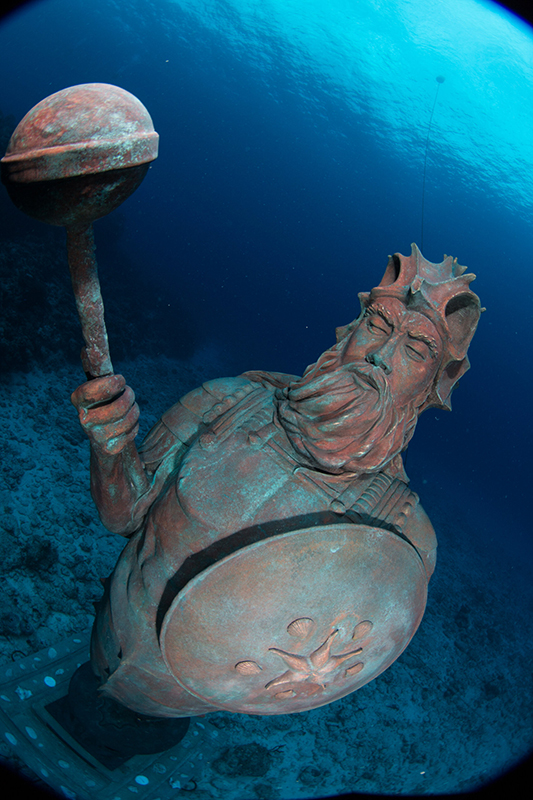 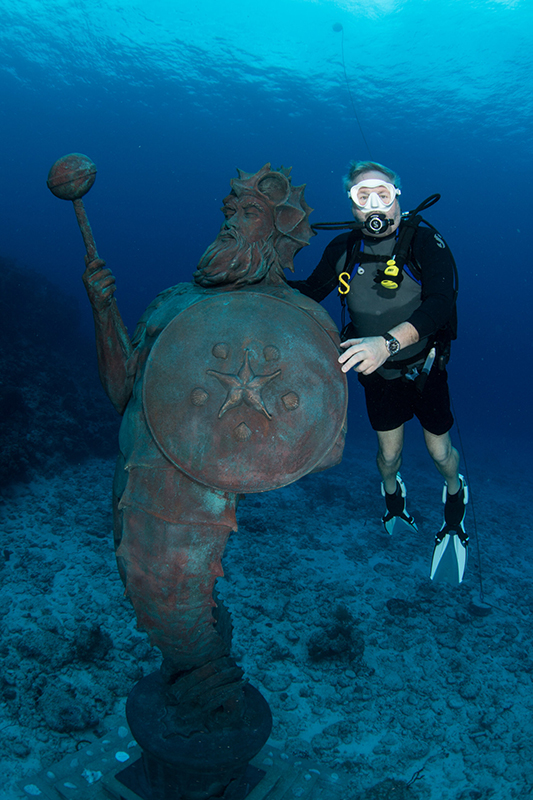 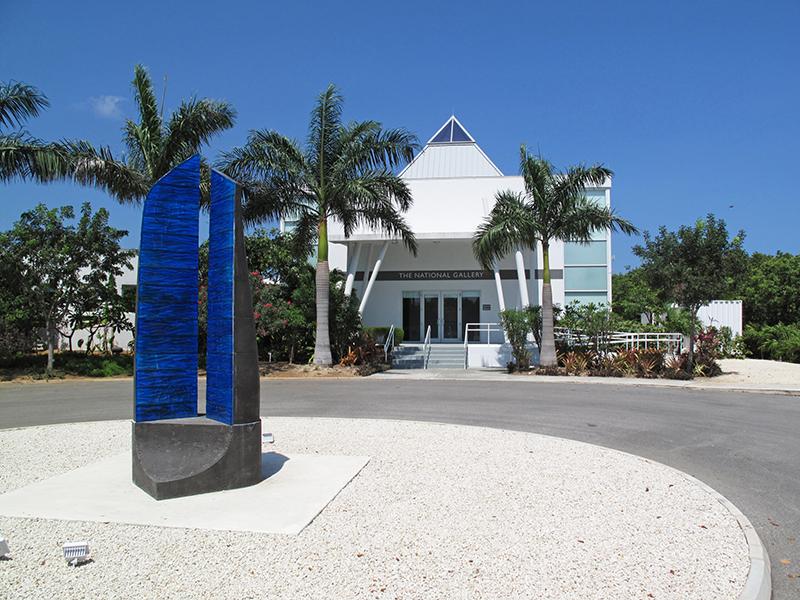 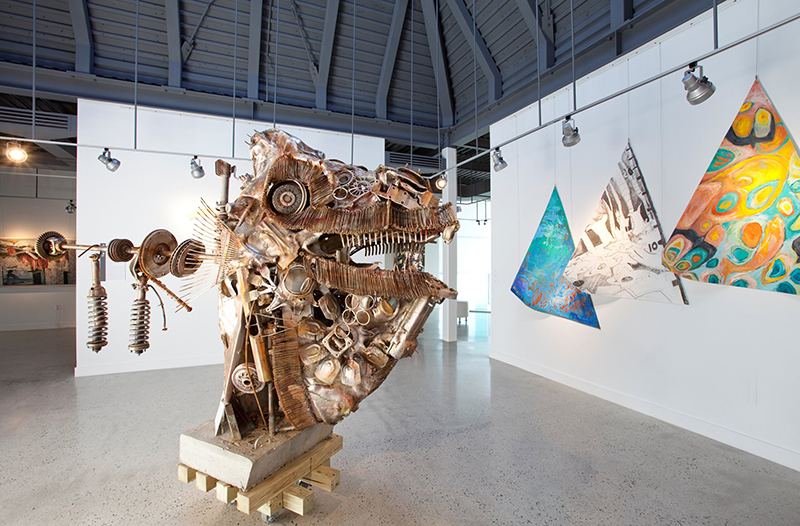 The theme across much of the art you’ll see, either coming from or existing on the islands, is a respect for the natural environment. In Morris’s case, that respect came from years of scuba diving—first off the coast of British Columbia, his home province, and later in tropical waters, like those surrounding the Cayman Islands.

“We can love things to death,” Morris explains, referring to the delicate balance of tourism and marine stewardship. “The idea originally behind putting pieces underwater was to create a focal point and to put the pieces in an area where divers could go in and test their buoyancy skills before they start venturing out onto the fragile reef.”

Visitors can do more than just enjoy the coral surrounding the islands—they can help rehabilitate it.

The waters of the Cayman Islands are known worldwide for their clarity, diversity of marine life, and great diving spots—thanks to the environmentally protected reef there. As with many islands, the health of the reef is intrinsically connected to both tourists and locals.

Dr. Gretchen Goodbody-Gringley, Director of Research with the Central Caribbean Marine Institute (CCMI), understands the reef’s significance on an altogether different level. “We’re almost entirely at sea level, so the structure of the reef is critical protection against storm surges and rising sea levels, and maintaining it so it’s as healthy as possible is very important.”

The CCMI, which has their field research station on Little Cayman, is one of many organizations in the Cayman Islands working on marine conservation efforts, with a particular focus on reef restoration. Like most parts of the world, the Caribbean Sea has suffered from the effects of climate change with climbing water temperatures creating a proliferation of bacteria and viruses that cause disease in coral. 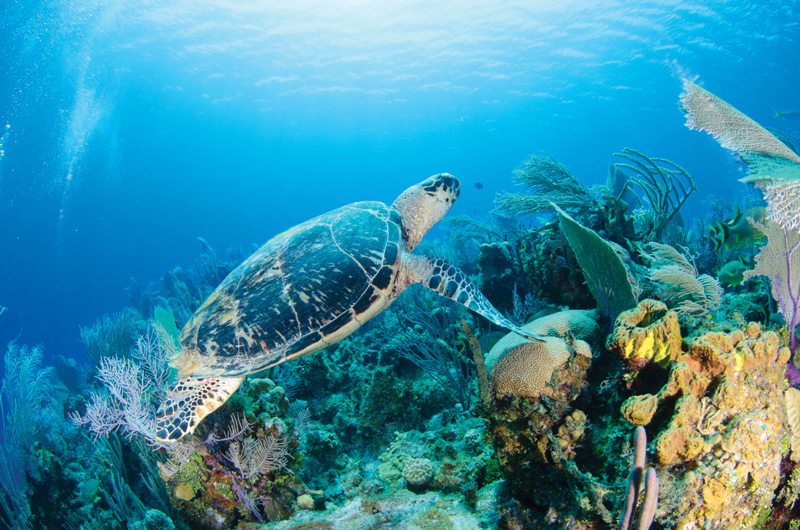 Caymanians take reef rehabilitation and marine life protection seriously because the ocean’s health is linked with the health of the island. 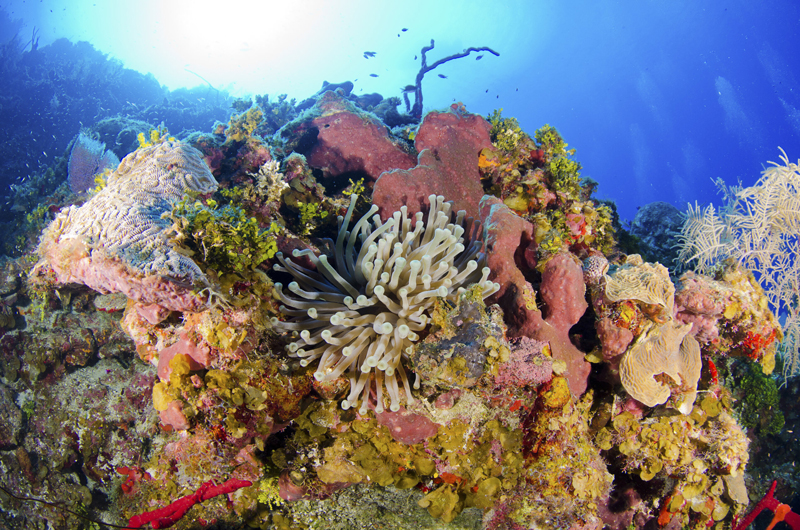 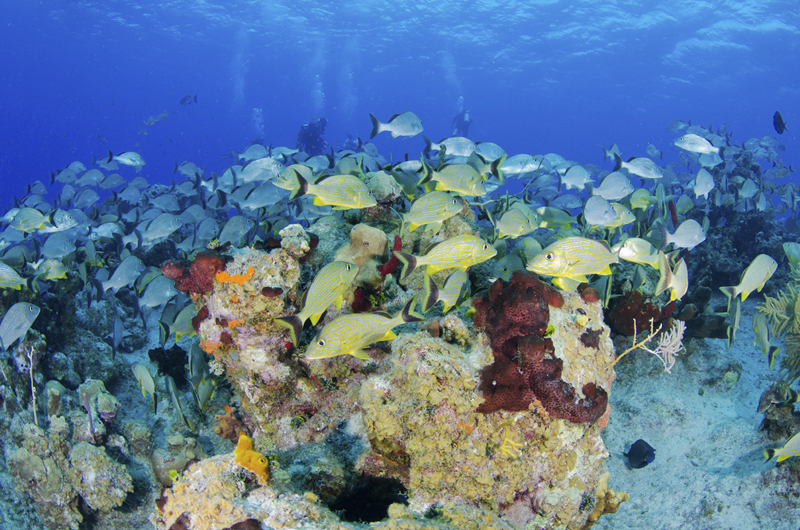 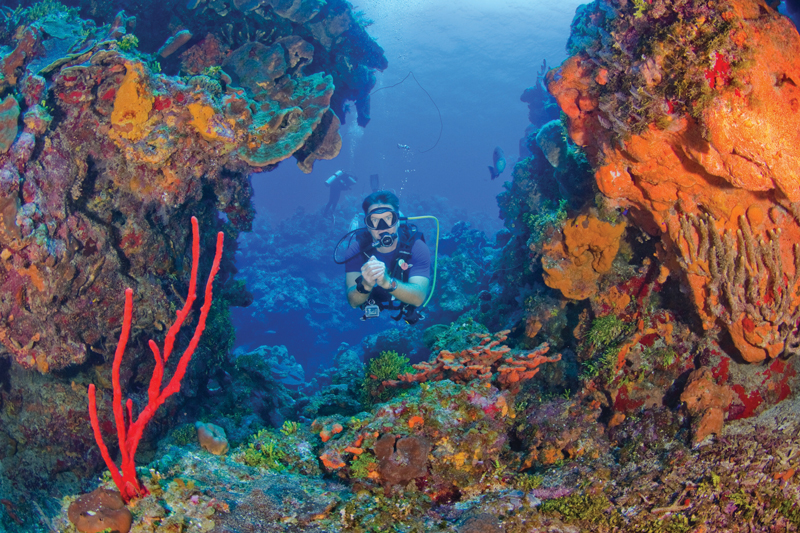 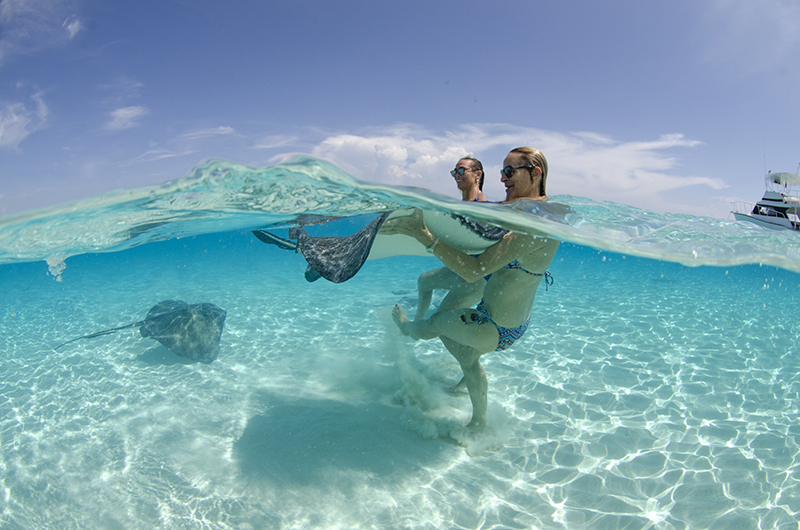 “In the late ’70s to early ’80s, coral reef cover was much higher—somewhere around 60 percent of the bottom of the ocean in areas that would normally have coral, actually had live coral,” Dr. Goodbody-Gringley notes. “Now, generally around the Caribbean, we’re looking at less than 5 percent coral cover.”

The coral cover around Little Cayman—and the other islands—is significantly higher than the Caribbean average: it has held steady for the past two decades at around 25 percent. Dr. Goodbody-Gringley suggests this may be due in part to the geological features of the ocean terrain where they are situated. There are trenches that are thousands of feet deep on either side of the islands which provide regular circulation of cooler water and might limit bacterial growth.

With such active initiatives on marine preservation and public education, there’s a unique opportunity for visitors to the islands to participate in some of these efforts. A number of organizations have created coral nurseries in nearby waters where divers can tour the nurseries to learn about coral conservation, or even help maintain a section of reef for the day.

“Even though we have a lot of tourism, the waters are clear and our reef is healthy,” says Dr. Goodbody-Gringley. “When you dive on a reef here you’ll see sea turtles and stingrays and other sea life and that can’t be said for everywhere else in the Caribbean.”

You’ll want to bring your hiking boots to Cayman Brac

If you find yourself anywhere on the island of Cayman Brac, you will likely hear the trilling call of the Cayman Brac Parrot, a subspecies of Amazon parrot unique to this island. The leaf-green birds are all over the island and are monitored closely as an endangered species. They even have their own 282-acre reserve, created and maintained by the National Trust for the Cayman Islands and filled with protected trees for nesting. 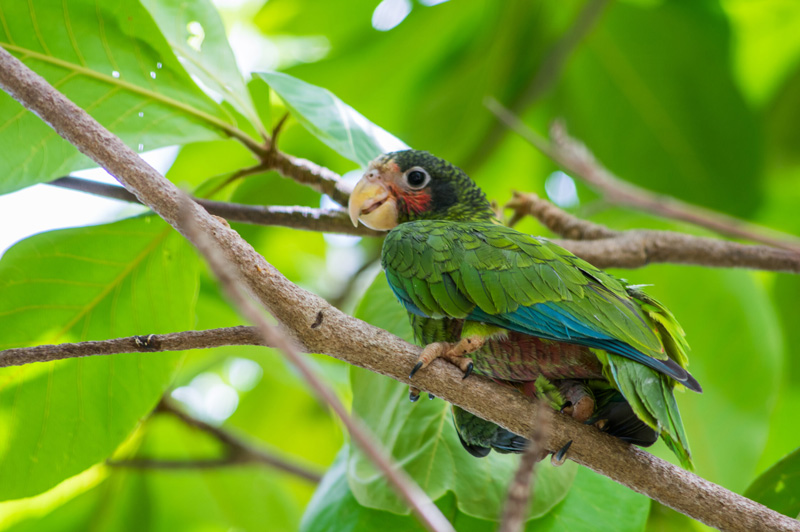 Cayman Brac is home to a wide range of wildlife, including the endangered Cayman Brac Parrot. 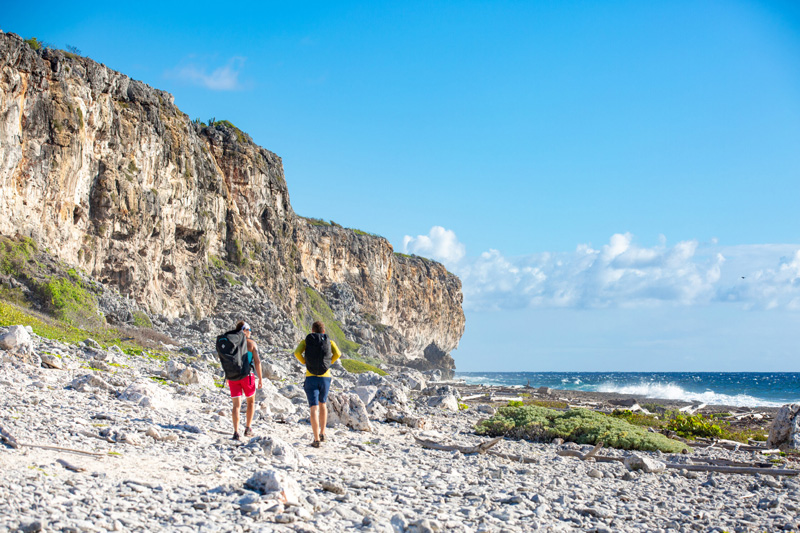 The Bluff that dominates Cayman Brac provides a stunning backdrop to the island’s hiking trails, reaching as high as 141 feet at the eastern end of the island. 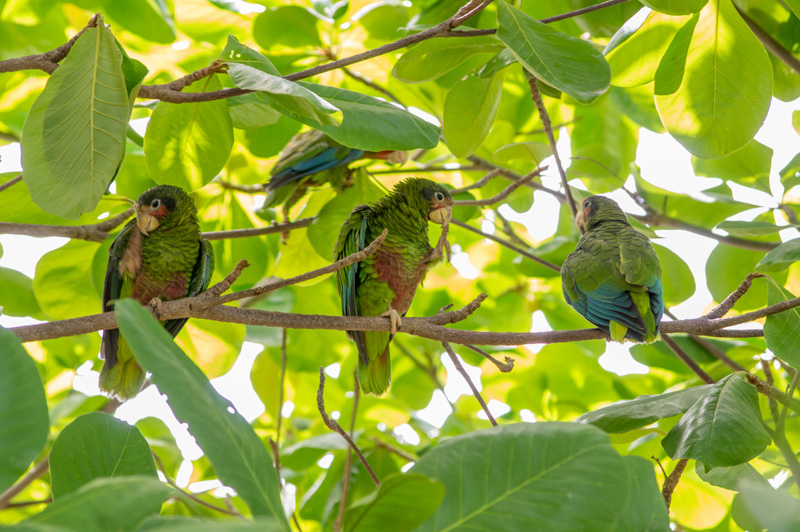 The island is far more rugged than the others with towering bluffs, hiking trails that cross the island, and protected marshes filled with countless migratory birds and local reptiles waiting to be carefully spotted. It’s perfect for more adventurous explorers.

That’s what sets the Cayman Islands apart, for Dr. Goodbody-Gringley. “Depending on which island you go to, you can get a very different experience and exposure to different subcultures even within the Cayman Islands,” she explains. “So you get a cultural experience, but you can also see a variety of different habitat types, ones that haven’t been completely decimated. It’s wonderful.”

‘Grief is about the joy of being alive’ 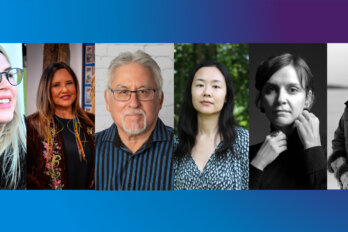 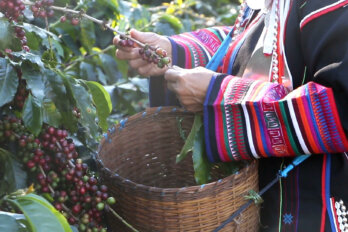 Climate Change Is Coming for Your Coffee