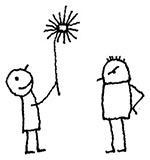 When Clinton Merasty showed up at Sarah Heavyman’s place with the box, Sarah’s father, Houston, was not particularly impressed.

“Kittens,” said Clinton, “I want to marry your daughter.”

“That’s the way we used to do it in the old days, all right,” said Houston.

“Times change, I suppose,” said Houston. “In the old days, when a man wanted to marry a woman, he’d bring horses.”

When Clinton rang the doorbell on Saturday, he was carrying four boxes of honey-garlic sausages in his arms.

“Holy,” said Houston, when he saw the sausages. “These are my favourite.”

“They’re the best,” said Houston. “You still want to marry my daughter? ”

The following week, Clinton drove up with a brown, Naugahyde recliner. Clinton and Houston set it on the sidewalk in front of the house.

“This looks just like the chair your father has in his den.”

“That’s the one,” said Clinton. “Dad said I could have it, if I thought it would help.”

“What’s your father going to sit on? ”

“He bought a leather recliner at The Brick’s half-price sale.”

Houston eased himself into the chair and leaned back so he could catch the sun on his face.

“It’s got this lever,” said Clinton. “When you pull it, a footrest pops out and holds your feet up.”

“It’s comfortable, for sure,” said Houston. “But your father’s right. There’s nothing like leather.”

A few days later, Clinton came by with a snow blower in the back of his truck.

“Hard to find a snow blower once winter sets in,” said Clinton.

“And she’s got a university degree in biology.” Houston rolled the snow blower back and forth to check the balance. “Those things don’t come cheap.”

“I had the blades sharpened and the spark plug replaced.”

“You know,” said Houston, “you’ve been by four times now.”

“And four’s an important number to Native people.”

“That’s right,” said Houston. “A lot of the songs we sing are sung four times through, and a lot of the dances are done four times. Sometimes when we pray for something, we say the prayer four times.”

“You should probably ask her.”

“She keeps saying no,” said Clinton. “I thought maybe you could talk to her.”

Clinton and Sarah were married in September. Houston would have preferred a traditional wedding on the reserve, but Clinton’s parents were Catholic. Afterwards, Houston took Clinton off to one side.

“She ask about horses? ”

“I told her there weren’t enough horses in the world, but that I’d keep trying.”

“Welcome to the family,” said Houston. “You’re smarter than you look.”

That evening Houston relaxed on the recliner in front of the television with a plate of sausages on his lap, while the kittens fought over a twist-tie. He wasn’t sure about the Catholic ceremony. A little too long, perhaps. A little too pretentious. But all in all, it had been a fine wedding. Enough to eat, enough to drink. Plenty of cameras.

It was too bad about the horses, though. As Houston watched Tiger Woods sink a forty-five-foot putt, he wondered what it must have been like for his grandfather to stand in front of his lodge and feel the land tremble, as young men, wild for his approval, galloped by, driving strings of ponies through the prairie grass.

A snow blower was a fine thing, to be sure, but where was the romance, where was the tradition? Still, Houston had to admit, it did have an eight-horse motor, six forward gears, and a twenty-six-inch clearing path. And maybe tomorrow, if the weather took a turn for the worse, he’d run it out to the backyard and start it up. Just to hear the motor rumble. Just to feel the earth move under his feet.