No Glove, No Love | The Walrus
Skip to content 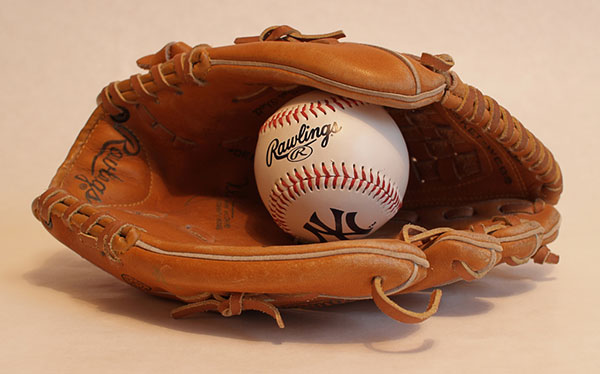 The feeling starts creeping in around now, pegged to the start of baseball season—this seems to be non-negotiable. If I could, I would at least change the timing of it. April is supposed to inaugurate a period of new beginnings, the bursting forth of fresh life, and hope for the future. But April means something very different for me, something darker and more painful: not the hopeful future, but the lamented past; not rebirth, but remembered loss; not expectation, but regret.

Every spring, as the crocuses poke through the soil, the chorus of birdsong starts anew, and major league teams from Toronto to San Diego begin playing meaningful baseball games again, I’m reminded of an excruciating and inescapable fact: my A-Rod glove is gone.

My A-Rod glove. A light brown Rawlings shortstop mitt, twelve inches in length, Basket-Web pocket, with a golden, factory-stamped “Alex Rodriguez” signature on the palm. To me, those details were incidental: it was, simply, my glove. Mine, necessarily—not just because I wore it, but because a glove changes, and it was me doing the wearing and the wearing doing the changing. By its final days in my possession, the way the glove looked, felt, smelled, and worked bore the imprint of me and every game I’d played.

And then, one gorgeous and miserable night five years ago, I lost it. Just like that. After seven years’ companionship and protection. Lost it for good, and in the stupidest possible way. The cruelty of that fact grips me every April and fills me with a sense of everything that I’ve lost and can’t replace.

I know, I know: it was just a glove. Rawlings has it listed online as the GG20G—as banal a name as it’s possible to dream up. They probably sell tens of thousands of them every year.

But a glove and a player have a peculiar relationship, more intimate than what is typical between a piece of sports gear and a human being. Baseball isn’t really a team game, but a series of one-on-one competitions, and often simply a competition with yourself: to catch a deep fly ball; to make the throw from third to first. In this lonely struggle, your glove is your silent companion. It cushions the sting of a well-hit baseball, protecting your hands, those sensitive and telling extremities, distinctive as snowflakes, endlessly revealing of character—so much more important to a person’s identity than the feet shod by skates, or the knees covered by pads. You wear your glove a lot—throughout practice, and during every defensive play of the game. You darken the inside leather with your sweat, imprint it with the primal funk of whatever smell it is people release in moments of high stress. You don’t share it, not often at least—the inevitable clamminess of the glove’s interior marks it as your own. Most importantly, and unlike anything else in sports, a baseball mitt lasts—for a decade or more, sometimes for generations. Or at least can last, if you don’t lose it.

My glove was the perfect size. It was small enough not to feel clunky and cartoonish; really a glove, that is, in the way it fit. This was less an appendage than an extension of my hand, just as dexterous and tactile as my own five fingers. When I wanted it to open extra wide, I would slide my ring finger into the pinkie compartment, taking a buttress out from the middle of the mitt and making it flap with a little added looseness. It was adaptable to my needs, a cooperative puppet.

And so beautiful. There was something all-American in its appearance, starting with the Rawlings logo, a loopy, cursive “R” at the base of the thumb, using the same red-and-white colour scheme and calligraphic font as a Coca-Cola can. And the colour of the mitt itself, which the company probably called “light brown,” or “natural,” but which seemed—and still seems, when I imagine it—to speak of the huge, lonely expanses of the southwest United States, the same hue as longhorn cattle, palomino horses, rawhide saddles, and sun-scorched earth.

And the smell—o, the smell! A bouquet so ripe and inimitable, I could bury my face in it for days—the faint animal musk of leather rubbing up against the chemical tang of the Gillette Lemon-Lime shaving cream I used to soften the pocket when the glove was new. (And always nearby in my memory, that throat-thickening, oddly sexual scent of freshly cut summer grass.)

Gloves aren’t just accessories, they’re equipment, too; they do work, and my glove did a yeoman’s job. Certain outs I remember with the precision of video replay. The time I was in centre field for my elementary school’s softball team, and made a sliding catch on my knees to save a run. The 4-3 double-play I turned for my high school team, ranging behind second base, stabbing the ball backhanded, tagging second, and spinning around to make a loopy throw to first just in time. Later that summer, the final out of the house league final: me on the mound, a runner on third, 3-2 count, coming set, rearing back, and throwing a high fastball that was swung on and missed for strike three. Moments of elation, of blinding happiness, of total comfort in my skin—all accompanied, all created, in a way, by that light-brown A-Rod glove.

The shape and the size and the smell and the colour were all organic, changing every year, molecular and malleable. It grew more perfect with time, that glove. Its leather became smoother, till it had the texture of a freshly-shaved cheek—a tenderness that came from the kneading of ground balls hit to second and line drives snagged in centre. As this process wore on—and as the ties between each finger loosened, and the palm gently sagged with the impact of catches, and the mesh of the pocket grew more elastic and yielding—the glove aged in an altogether graceful way, becoming more subtle and forgiving, more flexible in its absorption of novel experience, seasoned, you could say, rather than grizzled. Aging in the way we all aspire to.

The glove’s death, by contrast, was quick and brutal. On a humid August evening, a year after we had disbanded, I met up with my old house league teammates at Toronto’s Christie Pits Park. As a team in the Pee Wee division, with the same cast of players year after year, we Monarchs had won two championships in four years. And yet we were the unlikeliest of dynasties. Fueled by the Twizzlers and donuts provided by one of the team moms, we approached the game with complete irreverence. We were a latter-day Gashouse Gang, with names to match the Peppers and Dizzys of the ’37 Cardinals: there was Pablo and Leonardo, Mingus and Cristobal, Carson and Casey (as in Stengel, or “at the bat”).

Setting up just beyond the left field fence, we played catch and took batting practice and hit pepper until it got too dark to see the ball. Everyone was rusty. There were errant throws and bobbled catches and fruitless swings. We were mostly thinking about the bar where the night would end. But one play that evening reminded me of the easy physical joy that baseball can afford, and the perfect, voiceless communication that’s possible between a player and his glove: during a game of 500, someone with the bat—I think it was Pablo—tossed the ball to himself and corkscrewed a pop-up that drifted to his right. It was falling fast, and I misjudged it in the dying summer light, but recovered just in time and made a diving catch. As I lay against the field’s muddy grass, the ball sat securely in the pocket of my glove, stretching the leather webbing with a familiar, validating heaviness. We had done it again.

Soon after, my friends and I packed up the bats and balls and headed east on Bloor Street towards the college pubs of the Annex, our limbs heavy and sore with that hot, hollowed-out feeling that comes from immoderate throwing. We settled on a place called The Beer Station, a skuzzy dive bar with cheap house pitchers and table hockey. I was twenty, and slight after a year of low-budget backpacking; the pitchers went straight to my head. My glove, last I remember, was resting on a cushioned bench in the bar. Last I remember.

At around 1:30 in the morning, we staggered onto the subway, drowsy from the sun and the baseball and the beer. I don’t know when I realized my glove was missing—might have been the next day. I’m sure I called The Beer Station. I don’t really remember. Seems they didn’t have it. It’s funny: my memories of owning the glove, of wearing it, are so piercingly vivid. Losing the thing is a blur.

I sometimes wish I could forget the A-Rod mitt, move on, stop wallowing in nostalgia. What could be more pitiful than a twenty-three-year-old man, ostensibly in the prime of his life, mourning the loss of what was basically a childhood toy? Forgetting is healthy. Forgetful people walk around with innocent smiles, greet the world like it’s factory-fresh, replenish their reserves of energy, and buy new gloves.

I still haven’t bought another glove. When I play baseball, I borrow my dad’s black, thirteen-and-a-half-inch outfielder’s mitt. I hate it. Its length, its stiffness, its colour—they all serve to remind me of my first love, my rawhide-brown, baby seal–supple, citrus-scented A-Rod glove, that deft and faithful companion whose absence will haunt me for the rest of my Aprils.

Eric Andrew-Gee has published with the Toronto Star, Maisonneuve, and The New Republic.