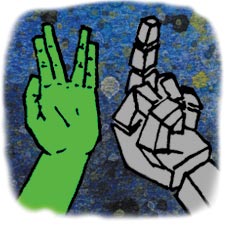 When I was seven, my father moved me and my siblings from Iqaluit to Vancouver to start a new life. I got my own room and a choice of stylish new bedsheets, but for the first month or so I would wake up confused and start sobbing when I realized where I was: away from home, away from my mother. Almost every night, I dreamt about our little slice of Arctic suburbia. Nothing strange would happen; I’d be standing outside our house looking down the dirt road toward the busy playground, or running down the hill behind our house to pick berries, always in the endless sunshine of summer.

Living down south did have its perks. There was a truck that played music and brought ice cream to you. There were no packs of feral dogs that could kill you if you wandered too far. Our father’s guilt meant we got anything we asked for (like purple suede shoes), and eventually I made new friends at school. Being the “Eskimo” girl helped in the popularity department, even if it was sometimes awkward. Growing up, I had often eaten on a piece of cardboard laid over the floor, using an ulu to cut chunks of raw meat right off the carcass. The mothers of North Vancouver were not prepared for my sense of etiquette. I don’t mean to paint myself as a savage—I was a quiet little girl, mostly—but everyone has their own kind of dinner rules, and I seemed good at breaking all of them.

One evening, when I was seventeen, I was hanging out in my friend Dani’s kitchen when her mother, Judi, announced that she was sending Dani and me to Iqaluit as a graduation present. She felt that eight years was too long for a mother and her child to be separated. It remains the nicest thing anyone has ever done for me. I’d built up Iqaluit for so long that it had become almost mythical, and now I was going back, with a witness.

Ten years ago, American academics and self-appointed watchdogs of all things linguistically erroneous started the Language Log blog. One persistent falsehood discussed regularly is the claim that Eskimos have over 100 words for snow. The first inaccuracy concerns the word “Eskimo,” a derogatory term corrupted from Ojibway and Cree and used to describe northern Aboriginals and their common tongue—conflating seven distinct Eskimo-Aleut languages and five dialects of Inuktitut. The second concerns the northern languages themselves. Inuktitut, for one, is not technically made up of words. Instead, it uses roots like aput, meaning snow, which can be combined with various affixes to communicate colourful and complex ideas. The expressiveness and malleability of Inuktitut challenges yet another misperception, this time put forth by an American encyclopedia: the inhabitants of the barren North have many words for snow because there is not much else to talk about in their “limited” environment.

When we flew low over Baffin Island and I saw the snow-covered hills, treeless and speckled black where the rock had been exposed by wind, I shed a few hot tears and hid my face from Dani. We held hands for the landing. My brother Mosha and his wife, Oksana, were there to meet us. I hadn’t seen them since they had visited Vancouver the previous summer. We hugged and preened over Oksana’s baby belly, while I took in the old airport, with its familiar orange plastic seating in the waiting area and the world’s shortest luggage conveyer belt. On the drive back to his apartment, Mosha detailed the plan to surprise my mother.

He and Oksana lived in a newer building, behind the Apex Road Quick Stop, which was also new…to me. Dani and I had settled in and were sipping mugs of hot tea in the kitchen when there was a knock on the door. I stood tense, my brother behind me holding a video camera, while Oksana invited my mother and her boyfriend in. My mother was shorter, chubbier, and much browner than I remembered her. I guess Polaroids wash people out. She introduced herself to Dani, and then she shook my hand, smiling politely. She didn’t recognize me. When she really looked at me and I said my name, there was a split second of fear in her face before she yelled out and embraced me tight.

The next week was a whirlwind. Mosha and my mother ferried Dani and me all over town visiting old friends and family. First stop was my anaanatsiaq and ataatatsiaq’s house (my grandparents’), where I saw my cousin Tim and met for the first time three cousins who had been born after I left. It was wonderful to see my family again. I hadn’t realized how isolated we were in Vancouver until I experienced the warm feeling of walking into someone’s house and finding pictures of me, in a floral dress and crooked glasses, on the mantel. But I was flooded with shame when I couldn’t speak to my grandparents in Inuktitut. I had been worried that everything in Iqaluit would be different, but it never occurred to me that I would be the thing that had changed the most.

On the morning of our departure, we heard an announcement on CBC Radio that a spring blizzard had shut down the airport, so we would have at least another day in Iqaluit. I should have been overjoyed, like my mother, but instead I snuck off to cry in my grandparents’ washroom, adding a layer of guilt to my homesickness. I had longed for my mother and my home for so long. I felt like a bad Inuk, and a bad daughter.

Dani and I flew out the next day, and our parents greeted us at the Vancouver airport with many excited questions about our time in Iqaluit. We gave stock answers—“It was amazing,” and “So much fun”—but of course it was infinitely more complicated, so I didn’t say much once I got in the car with my dad. He didn’t mind, always happy to be quiet together, and we drove up the familiar Westview Drive in silence.