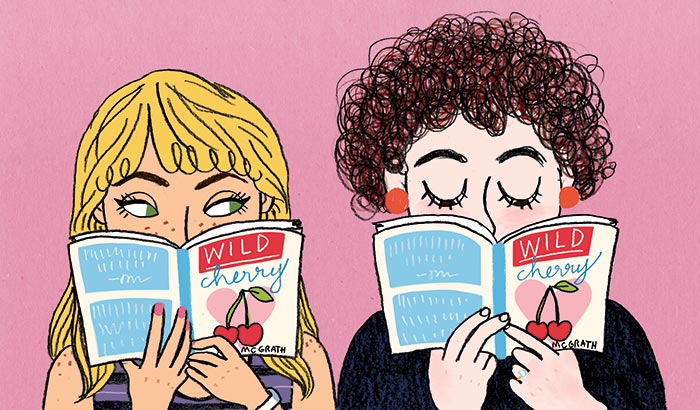 In November 2009, as the young adult fiction boom neared its apex, the New York publishing house St. Martin’s Press announced a contest on an employee’s blog: “Since twenty-somethings are devouring YA, St. Martin’s Press is seeking fiction similar to YA that can be marketed as adult—sort of an ‘older YA’ or ‘new adult.’” The broad criteria (characters in their early twenties who would also appeal to an adult readership) generated wildly divergent results: submissions about twentysomething intergalactic spies, twentysomething incubus love interests, twentysomething Edwardian vampires. The winner, Kristan Hoffman’s Twenty-Somewhere, took the challenge much more literally.

The narrative follows a group of girlfriends after graduation from college, as they chase dream jobs and a Taylor Swift album’s worth of shaggy-haired, tattooed love interests across the United States. Claudia, a struggling writer, hashes out her Bildungsroman masterpiece while adjusting to cohabitation with her high school boyfriend. Sophie pursues an advertising career under a megalomaniac boss and falls for Diego, a Latino Lothario; M.J., studying biology in grad school, flirts with her young, handsome professor. The friends reunite to recount their grown-up adventures, dressed in cutesy pyjamas for slumber parties. Publishing seemed to have jumped on the millennial bandwagon.

Social demographers William Strauss and Neil Howe coined the M-word in the early ’90s, expounding on it in their 2000 book, Millennials Rising: The Next Great Generation, a game-changing feat of pop science that grossly generalized its subjects but still managed to isolate some archetypal truths. Kids born between 1982 and 2000, they explained, were a cohort of glass-half-full types who believed in teamwork and bicycles and quinoa. Pushing back against their Gen X predecessors, they adopted a sincerity and an optimism not seen since the GI era. Unlike the GIs, however, millennials were as soft as marshmallows, having been coddled by their boomer parents, who assured them that yes, of course, artisanal terrarium design was a savvy career choice. Recent statistics bear out the inevitable consequences: 40 percent of Canadians between ages twenty and twenty-nine still live with their parents, and unemployment among them hovers near 15 percent, almost twice the national average—a rate that is poised to cost the Canadian economy upwards of $23 billion over the next eighteen years.

Millennialism quickly traced the path from demographic to cultural phenomenon. It became a newspaper buzzword, showing up in articles about the floundering economy and generational warfare. Moreover, it was increasingly used as a euphemism for white privilege, snotty narcissism, and self-aggrandizing sloth. Much of the literature was written by boomers, who resented that their golden years were being extinguished by the Peter Pan generation. “Today’s young people expect to reach adulthood eventually, and they expect to enjoy their adult lives, but most are in no hurry to get there,” wrote psychologist Jeffrey Arnett in his book, gently titled When Will My Grown-Up Kid Grow Up? Loving and Understanding Your Emerging Adult. “They prefer to spend the early part of their twenties unfettered, having experiences that won’t be open to them once the mantle of adult responsibilities settles on their shoulders.”

If I bristle at this characterization, perhaps it is because it doesn’t quite fit. Technically, I am a millennial, but I have a university degree, a job, and an apartment. Then again, it might be a defence mechanism: deep down, I fear that what they say is true. After all, I eat peanut butter for dinner, and my dad still files my taxes. I’m practically a BuzzFeed list. That very ambivalence—those conflicting impulses toward sheltered youth and independent maturity—make the liminal stage between childhood and adulthood such lucrative territory.

Since the release of Twenty-Somewhere five years ago, new-adult fiction has exploded into a publishing juggernaut. One of 18,400 or so NA books on the market, Beautiful Disaster was self-published in May 2011 and sold 200,000 units by July 2012, when it was picked up by Atria, a division of Simon & Schuster. Slammed, self-published in January 2012, sold roughly the same number before Atria reissued it that August. These and other titles have appeared on the New York Times and USA Today bestseller lists. Like YA, and romance before it, new-adult fiction has provided a much-needed boost to an enfeebled industry.

The new-adult machine has succeeded precisely because it found the sweet spot between those two established phenomena. Young adult books like The Hunger Games and The Fault in Our Stars position teenagehood as an activation stage, in which the protagonists cross the barrier into sentience. It tracks all of the firsts—relationships, friendships, betrayals, failures—turning every moment into a momentous achievement. New-adult fiction replicates many of those emotional beats as characters face a new barrier: independence.

In theory, the books target the demographic at that very moment of development; the characters are attracted to the siren song of freedom but wilfully naive about the associated responsibility. For those who have outgrown the chaste, fade-to-black approach to sex that codifies the YA idiom, there are tender, PG-rated sessions, as well as explicitly carnal romps that span a dozen pages at a time. But the beauty of the new-adult marketing strategy is that it also attracts readers outside the demographic, from actual teens who reach sexual maturity earlier every year, to the millions of adults who secretly devour YA, constituting about half of its readership.

Then there are the Fifty Shades of Grey fans, sexually emancipated but perhaps craving rounder characters and more story to pad out the erotic content. For them, new-adult books manufacture an irresistible romance of youth, shoring it up with aggressively gritty subject matter such as rape, addiction, incest, and depression. They amplify the excitement of that age, the folly and the freedom, but most of all they hark back to that period of life when everything was still possible. Nostalgia has always held an allure, but in this post-ironic landscape, when sincerity and sentiment have re-emerged as cultural assets, older readers can finally admit their longing for a more innocent time.

One of the best examples of the new-adult mash-up is Tammara Webber’s 2012 hit Easy. It revolves around Jacqueline, a high school graduate who forgoes her dream of a liberal arts education to attend a state college with her fratty boyfriend, who dumps her three weeks into the semester. She spends the remainder of the story contemplating her independence (she cycles through a series of female empowerment rituals, including bonding with her cheerleader roommate and taking self-defence classes). Meanwhile, she connects with Lucas, a brooding bad boy with a lip ring who turns out to have the proverbial heart of gold. As in YA and romance, Easy adheres to the happy ending rule: Jacqueline overcomes trust issues and emerges with a new boyfriend and a newfound self-confidence (sadly, the first begets the second). Just as it did with Easy’s counterparts, social media drove a self-propagating, almost viral popularity.

On the website Goodreads, a hive of Internet reading habitués with more than 25 million members, Easy has received hundreds of thousands of reviews and ratings. Its Facebook-like home page is decorated with GIFs, fan art, and ecstatic comments from readers. Webber, naturally, has her own Goodreads account, tracking her favourites and geeking out over others’ books. In the new-adult world, the separation between writer and reader has all but disappeared; they have become one and the same.

To wit: K. A. (Kathleen) Tucker, a writer from small-town Ontario whose next NA novel, Five Ways to Fall, will be released by Atria in June. Tucker is thirty-five but looks as young as the women she describes in her books, with her heart-shaped Tinkerbell face, sunny blond hair, moto jacket and skinny jeans. Like many contemporary genre writers, she started out as a fan of books like Easy and Slammed before she decided to tell her own stories. “As I got older, married and had kids, I missed that excitement, that fast-paced adventure,” she says. “There’s so much opportunity for storytelling. Everything is a first, an occasion.”

In December 2012, she published her first new-adult novel, Ten Tiny Breaths, about two orphan siblings, one new adult and one young adult, who flee to Miami after their uncle attempts to rape the younger sister. It came out on Smashwords, Amazon, iTunes, and Barnesandnoble.com, at $3.99 a download, and sold more than 40,000 copies in its first three weeks. Two months later, thirty-one-year-old Simon & Schuster editor Amy Tannenbaum stumbled across a review of the book on Maryse.net, a vampire blog turned underground tastemaker that receives more than a million page views every month. She devoured Tucker’s novel and signed her for a four-book deal.

“These self-published authors have shown us what the audience demands,” explains Amy Black, a YA editor at Doubleday Canada. “They’ve found an audience, and traditional publishers have managed to build on that and expand the readership,” she says. “Finding an audience” is code for marketing, obviously, and Black as much as confirms this by suggesting that these stories have always existed. “Were Girl, Interrupted published today,” she says, referring to Susanna Kaysen’s 1993 memoir about her time in a psychiatric ward, “it might be marketed as a new-adult book.”

Perhaps, though, some key differences suggest that the new-adult craze is more than just publisher-spun hype. Take Tucker’s Ten Tiny Breaths, for instance. In sun-kissed Miami, the orphan sisters move into a down-at-the-heels Melrose Place complex, where the elder one, Kacey, assembles a surrogate family from their motley crew of fellow tenants. The pair hold Hannah Montana dance parties in their apartment. Kacey takes a bartending gig (as much a party as a job), and she engages in uninhibited laundry room hookups with the hot guy down the hall, making out on top of a vibrating washer. In NA, the characters are rarely uncomfortable, and if they are, it is but for a brief, shimmering moment, more exciting than traumatic. There is always some quick fix, a reward in the form of romantic love or professional success—or, in Kacey’s case, both. She ends up going back to school and settling into a committed relationship with her laundry room lover. Unlike capital-L literature that covers similar territory—Girl, Interrupted, Jeffrey Eugenides’ The Marriage Plot, even Charles Dickens’ Great Expectations—new-adult novels categorically depict the transition from childhood to adulthood not as a threshold, but as a cushiony holding area, a never-never land without parents or responsibility.

Irresistible, right? If stories of emerging adulthood have always existed, surely they have never been so culturally resonant. What the NA publishing phenomenon demonstrates is that, jeering aside, millennials are not the only ones being lured to that paradise. It has also become a destination for the teens who have yet to experience new adulthood, and the adults who have let it slip away. As NA continues to colonize bookshelves, the horizon of adulthood grows further and fainter. Pretty soon there won’t be any grown-ups left.

Emily Landau is an associate editor at Toronto Life and a former Walrus intern.
Katie Turner