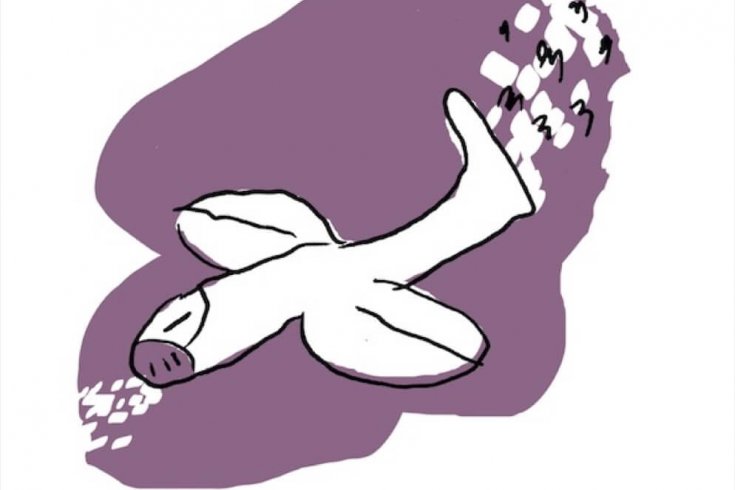 I am a concerned citizen writing to you about the swine flu pandemic! Before you forward this letter to the Ministry of Health, I should first say it regards two recent vacations.

As patriots who adore our nation’s bountiful natural wonders and diverse peoples, my husband, Kirk, and I normally choose to travel within our vast borders, provided we find a hotel that can accommodate Kirk’s allergies to both legumes and cotton bedding and has space for me to practise my Irish step-dancing routines. Above all else, Kirk and I love our country. We only drink Canadian beers, whiskies, and syrups. We have a five-year-old Newfoundland named Avro. We cheer for Canada in the Olympics and every Canadian team in the Stanley Cup playoffs. On Grey Cup day, we always root for a tie.

In April 2008, we decided to spend a week in British Columbia. As usual, we planned our itinerary weeks in advance, and, aside from the drizzly weather and the lack of peameal bacon on the hotel menu, everything went as we expected. But something was wrong with our vacation. Throughout the trip, Kirk, who’d just celebrated his fortieth birthday, had become emotionally withdrawn and listless. Not even the orca-watching expedition in Tofino could perk him up.

Travel in the H1N1 Age

From a SmartMoney report on vacation deals

But is it safe to go now? A lot of people want to convince travelers that things are alright. The Mexican government is certainly hoping to do that by assuring everyone that Mexico City is ready to be reopened for business. The WHO says travel restrictions aren’t necessary. And airlines are working hard to regain passenger confidence. Last week, German airline Lufthansa began stationing doctors on all its flights to and from Mexico, announcing that they will be there to detect and treat affected passengers.

“If someone offered me an all-expenses-paid trip to Cancun, would I go? Yes, absolutely,” says Gerald Evans, an infectious disease specialist at Queen’s University in Ontario and president of the Association of Medical Microbiology and Infectious Disease Canada. The exception: Infants, the elderly, people with compromised immune systems and others typically at high risk of serious flu complications should stay at home, he says.

“Yes, but also in our marriage.”

Our marriage, it seemed, was a lot like our country. It was solid and dependable, but also overtaxed and sexless. After this trip, we considered a trial separation, but Kirk finally came around to the idea of counselling. Our therapist suggested we look outside our borders for our 2009 vacation. Kirk found an all-inclusive package to Veracruz, but shortly after we booked our flight all the cable networks started barking hysterically about H1N1 virus as they showed images of empty soccer stadiums and Mexicans in surgical masks.

“Look at all those cute school kids washing their hands,” I said to Kirk, pointing to the television. “Should we be scared? ”

“I don’t know. But we’d be going back on our word if we were to cancel now.”

I agreed. “It’d be un-Canadian of us not to go on this trip and find faults with their country’s infrastructure and services.”

So we went to Mexico, and it was nothing like Canada. Even at our resort, we feared infection, theft, and food poisoning. We have never felt so afraid… or so alive! Fearing for our lives brought Kirk and me closer than we’d ever been before, and whetted our appetite for adventure. One night at the resort bar, a Mexican woman with a hacking cough smiled at us.

“You two are what—Canadian? ” she asked from her barstool. She was gorgeous, like a Mexican Anne Murray.

“Yes!” we chimed together.

“I knew it,” she said. “I thought you sounded American at first, but your manner is more worldly, less arrogant. Also, I couldn’t help but notice the Canadian flags on your fanny packs.”

We invited the woman to dinner and later—I can’t believe this myself—to our hotel room. Between coughs, she practised her English on us and tried to sell us a time-share by the golf course; when she looked away, we scrubbed sanitizer on our hands and other points of contact. Sure, she might have stolen the pesos from our fanny packs as we slept, but she also stole our hearts!

When we got home, we told everyone about our great vacation, and a funny thing happened: they all had similar stories! The Burtons went to England in 2001 after the mad cow scare and got half-price admission to Stonehenge, where they had intercourse in a washroom. Our accountant, Michael Quon, went back to China to visit his grandmother during the SARS scare; his wife was hospitalized for three days, but upon her discharge they attended a Shanghai key party. And the Jeromes, who are also part of the local Irish step-dancing scene, visited Cairo during the West Nile virus scare and conceived their second child, Hamish, after a trip to the pyramids. Four pandemics, four great vacations!

Now, let me ask you this, minister: are there people from Mexico, England, China, and Egypt coming to Canada to rejuvenate their marriages? I think not. And why’s that? Because our country lacks danger and excitement. Sure, we get our own versions of mad cow disease and swine flu, but only after everyone else does—like So You Think You Can Dance.

To boost our country’s brand appeal, I propose a “viral marketing” campaign. We need to develop our own animal disease. And what’s more Canadian than the noble moose? Obviously, epidemics don’t arise easily from animals that live in our expanses of pristine wilderness, but I have confidence in the bioengineers of the greatest country on earth (i.e., Canada). I mean, if the Mexicans can create a health scare by accident, surely we can make one on purpose.

Soon, as people around the world become nauseated and infirm from moose flu, Canada’s unparalleled vistas and cityscapes will appear on every television screen on the planet. Brave couples looking to spice things up will arrive at our airports with their facemasks and best lingerie. Think of a moose flu epidemic as our “vaccination” from boredom!

Kevin Chong is the author of six books, including the 2018 novel The Plague. He lives in Vancouver.
Terry Corrigan