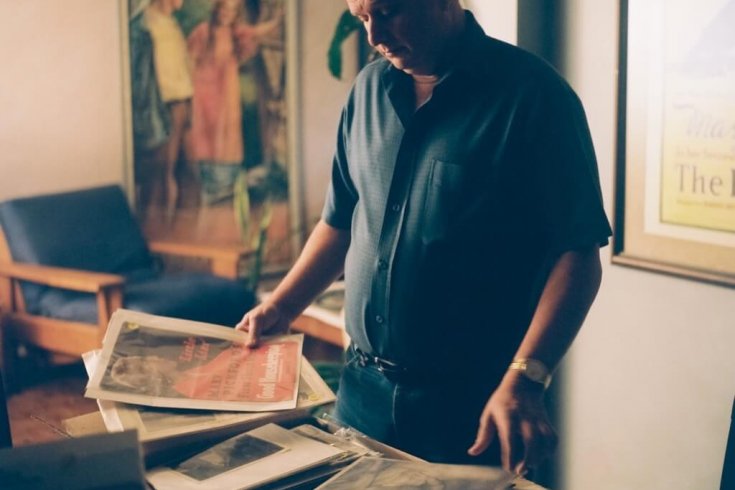 Over the past thirty years, fifty-seven-year-old Rob Brooks of Mississauga amassed the largest collection of Mary Pickford memorabilia known to exist. It includes postcards, lobby cards, production stills, heralds, magazines, fan photos, press books, and hundreds of thousands of dollars’ worth of posters; it includes a vial of her perfume, two dresses and a coat, and a photograph of her mother in a silver frame, embossed with the words “Mama Pickford.” He collected more pieces than the Mary Pickford Institute in Los Angeles, and more than the Academy of Motion Picture Arts and Sciences. Pickford filled his five-bedroom house, where he lives alone.

“Over the years, it just got worse and worse,” he says. “I started out putting stuff down in the basement. I thought, I’ll never let it go upstairs.” From his seat, flanked by an Edison Home Phonograph and a coffee table bearing an eighty-five-year-old issue of Maclean’s, he points to the miscellaneous Pickford items that litter his dining-room table. “It’s a little screwy, but it is what it is.” But these are just the remains. Last winter, he donated thousands of pieces to the Toronto International Film Festival, which will display selected items in a six-month exhibition that opens in January at the Bell Lightbox in Toronto. He hopes his donation, long in the making, will lead more Canadians to the actress he calls a national legend.

A museum for a made-up universe

The Museum of Jurassic Technology was founded in Los Angeles in 1987 by David Hildebrand Wilson and his wife, Diana. Intended to advance “knowledge and public appreciation of the Lower Jurassic,” the period that began nearly 200 million years ago, the permanent collection includes “relics” like the stink ant of the Cameroon, and fruit stones carved with intricate Flemish landscapes. Temporary exhibitions have featured the decaying dice of the illusionist and actor Ricky Jay, and the microminiature sculptures of Egyptian artist Hagop Sandaldjian, who often framed his tiny creations in the eye of a needle. Wilson, who received a MacArthur “Genius” Fellowship in 2001, is also the subject of Lawrence Weschler’s book Mr. Wilson’s Cabinet of Wonder. The Pulitzer-nominated profile revealed that many of the museum’s objects were created during the Quaternary period, by Wilson himself. He happily acknowledged the hoax: the museum is as much about the collector as about the collection.

Like Pickford, the first Hollywood actor to command a substantial fee (in her case, $10 a day), Brooks was born and raised near Toronto and typifies traditional suburban Ontario. His voice resounds with the breed’s distinctive Irish-Scottish tones. Stocky and neatly bald, with hazel eyes, he wears a Maple Leafs sweatshirt, blue jeans, and moccasins. He is nationalistic in his tastes: aside from Pickford, he collects Marie Prevost, Nell Shipman, Barbara Kent, and Ruby Keeler, all stars of early cinema born in Canada. But Pickford alone was dubbed America’s Sweetheart. And it was she who happened to grow up a few kilometres from his house. Back in the ’80s, he was horrified to learn that this early film heroine had been a local girl. How could he—a history buff, a good Canadian, the first among his acquaintances to own a VCR—not have known?

“If you’re into women who accomplished things—oh boy, there aren’t too many on the planet like her,” he says. “She took on all the guys who ran the studios, and beat them at their own game.” She was the biggest star of her time, “the first known-worldwide human.” Her relationship with Douglas Fairbanks recalls Angelina and Brad’s. (Long before Brangelina, the superstar couple named their Hollywood home Pickfair.) But decades after her heyday, she didn’t want to be recognized. “She just felt once sound came in that silent films were quirky and she might be looked on as—” The word “camp” escaped him. “She just didn’t want them seen. And she certainly didn’t promote them.” While stars like Buster Keaton and Charlie Chaplin released their own films as soon as nostalgia for the silent era supplied a market in the 1950s, Pickford “kept quiet about everything.” While her contemporaries experienced a renaissance, she disappeared from view.

A music marketing consultant in his corporate life, Brooks is reviving Pickford’s memory. Over the years, his collection, which began as a hobby, evolved into a public tribute. He made it accessible to anyone who wanted to see it, through an online archive and in person. Visitors toured his house. His sister, Linda, says he “networked North America to death” last year, attempting to stage a major centennial celebration of Pickford’s film career. That no one really took notice was hard for him to bear. “This has been a real passion for him,” she explains. “He never settled down to get married—he couldn’t, because of his work—so this is almost like a love interest.”

The collection is almost entirely gone now, leaving nothing more than stray nails and empty frames scattered along the walls. The donation was a sacrifice, a gesture in service of the woman he loves. “It was awful,” he says. “It still is. It’s been gone for months, and I haven’t put other stuff up. I haven’t dealt with it.” We move through the house to see what remains. In the foyer, at the bottom of the staircase, he pauses. This is where the prize of his collection, a poster for the 1917 feature Rebecca of Sunnybrook Farm, once hung. He had placed it here so he would see it every morning. “I wish you could’ve seen it. It was the only copy in existence. It used to be owned by William Randolph Hearst.” His voice diminishes. “The eyes… It was absolutely stunning. They were almost haunting.” He turns to go downstairs. “It was kind of tough to see that one go.”

Down in the basement hang autographed pictures of vintage stars who aren’t Pickford: Fay Wray, Colleen Moore, Charlie Chaplin. Brooks looks around at where pieces of his girl used to be. “They need to be protected,” he says, as though to reassure himself. Because, as he acknowledges, he can’t get them back. They belong to Heritage Canada now.