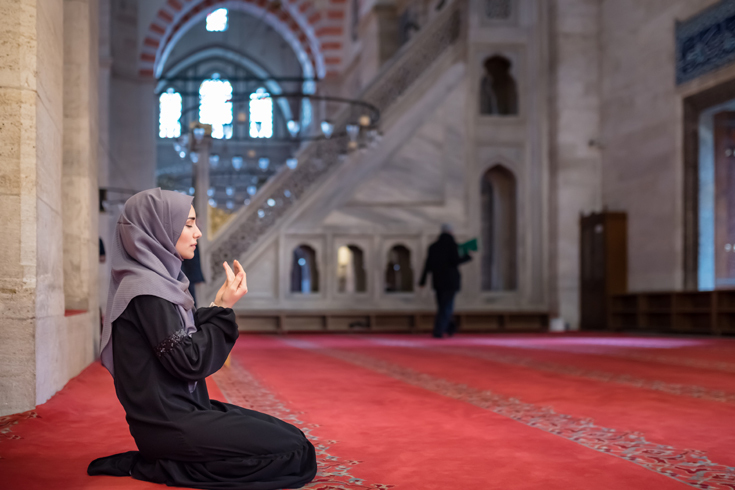 Muslims are no strangers to quarantine. Practising worshippers retreat into a structured prayer at least five times a day—which many of them view as a spiritual quarantine from the worldly rat race.

This daily practice may differ in certain details depending on a congregation’s beliefs or locale, but it remains a pillar of the religion. Islam generally encourages its followers to carry out these rituals, as often as they can, in a mosque, which helps focus worship by further isolating Muslims inside a sacred physical structure. Though daily prayers tend to be intimate personal practices, Islam encourages these individual journeys to take place together—each worshipper standing and praying next to another, in rows behind a leader.

Mosques are meant to facilitate this collectivization. They physically enclose the point where worshippers’ vertical connections to divinity intersect with their horizontal connections to one another. This physical gathering is supposed to be the formation that lies at the heart of Islamic spiritual community. The mosque is the sacred, symbolic structure that holds it all together. Or, rather, it was.

The COVID-19 pandemic has punched a giant hole in this arrangement. The closure of all nonessential places of gathering, along with the common sense enforcement of social distancing rules, means that many mosques across Canada have been shut down for the foreseeable future. Many congregations are brimming with senior citizens, who get much of their socializing done at mosques; the current lockdown is hitting them particularly hard.

The timing is especially crucial for Muslims because this lockdown coincided with the holy month of Ramadan, when hundreds of millions of Muslims around the world fast from sunrise to sunset. During this month of the Islamic calendar, which ended in late May this year, many are used to congregating in mosques for additional nightly prayers (tarawih) that can last hours. Throwing this routine out the window was another huge collective shock to the Muslim community.

Many Muslims who feel connected to their faith, including myself, have grown accustomed to kicking it into overdrive during Ramadan. For me, this means gathering nightly at the mosque for prayers, breaking the fast with my friends, and yawning through fundraisers hosted by Muslim NGOs and mosques.

For others, it might be the only time of year when they see the community gathered together, socially and spiritually. The month is supposed to represent the apex of spiritual community. For the wayward and disenchanted, Ramadan might be one of the rare times they feel like attending a mosque and connecting with fellow Muslims.

But, for some, the lockdown means that little has changed: this pandemic isn’t the only barrier that has kept them away from mosques over the years. According to the religious tradition, mosques should be welcoming places that open up for just about everyone, believer and nonbeliever alike. But mosque leaders often promote policies that, whether deliberately or inadvertently, marginalize Muslims who adhere less to traditional norms. And, when some people aren’t properly welcomed, the whole concept of spiritual community gets discredited. Those who feel rejected in the mosque are forced to dwell alone on a spiritual island. This religious quarantine is far removed from the intended experience.

In normal times, those who felt excluded by this or that mosque were more or less left to find their own spiritual way. But, during a pandemic, when people can’t gather in physical spaces at all, we’re all left unmoored. The mosque allowed many of us to venture into and out of spiritual quarantine at will. It facilitated our spiritual freedom. That choice is gone. Now, we have all physically retreated into our rooms, much like those who have been overlooked, forgotten, excluded, scared away, or marginalized over the years. Our forced confinement brings us face to face with the reality that exclusion has long been the frustrating normal for many Muslims. This is our wake-up call.

“Don’t forget that Muslims are already marginalized,” says Sabreena Ghaffar-Siddiqui, a sociologist at Sheridan College who also sat on the board of the Canadian Council of Muslim Women. She recently completed her PhD on the use of physical community spaces to combat this sense of marginalization among Muslim communities in Canada. Many of those she surveyed, particularly younger, second-generation Muslims, craved spaces in which to feel a sense of community yet felt they weren’t welcome in mosques. “Especially at a time like this,” she says, “they’re needing that place of belonging.”

Women are particularly prone to being “unmosqued”—a term many, including Ghaffar-Siddiqui, use to refer to the experience of feeling excluded from mosques.

For years, female worshippers have spoken out, both in private conversations and in group discussions, about a lack of space for them. Most mosques segregate men and women into two sections; the women’s space is usually much smaller, likely because the Friday congregational prayer and sermon (the most important regular Muslim gathering) is obligatory for men and not for women. Mosques then operate on the assumption that women are less likely to participate.

The mosque is supposed to be particularly inclusive during Ramadan, when congregants flood in for additional night prayers. But, in past years, many women have voiced their reluctance to attend these prayers—they don’t want to be squeezed in between dozens of others while trying to have a spiritual experience. During Ramadan in 2018, women attending a Mississauga mosque petitioned the management to address the cramped quarters in their section. They eventually convinced board members to split the main prayer area into two equal spaces during Ramadan, one for men and one for women.

For many women, appealing to mosque leaders is much more than a bureaucratic exercise. Pushing for change requires persuading “uncles”—the respected, usually older Muslim male community leaders who often sit on mosque boards and influence key decisions. (A 2016 survey by Environics Canada found that about one in five Canadian Muslims aren’t satisfied with opportunities for women to play leadership roles in their communities.) And, in some more conservative spheres, this effort can take a toll.

“I find it funny when people tell me that they’re tired of yelling at uncles or community leaders,” says Ghaffar-Siddiqui. “I’d be happy if they even returned my greetings or entertained my phone calls.”

“The people who hold a very strong attachment to mosques—often to the point where they will build one from scratch—are usually elderly men, who then tend to hold onto control because they have an emotional attachment to what they helped build,” says Zara, a staff member at a prominent mosque in the GTA. (To protect her job, she declined to use her real name.) “The leadership doesn’t always understand the complex needs of the wider community, and they often don’t serve everyone well.”

One female worshipper I spoke to recalls entering a mosque in Mississauga some years back wearing a pair of jeans. This and other form-fitting clothing worn by women are considered inappropriate mosque attire by the more conservative minded. An older woman confronted her and told her to leave and never return dressed that way. She never returned to that mosque at all.

The generational divide plays out in other ways: many younger congregants, in their early thirties and below, feel that mosques do little to attract or include them. In a long-standing and lively debate over the function of mosques, some argue that the spaces should offer multifaceted services as opposed to being used purely for prayer. Before the pandemic-induced closure, many mosques were already doubling as Islamic schools. Others have gyms and programming developed specifically to draw in and retain more young people.

“The mosque caters too much to religious folks,” says Zara. “We should start moulding mosques into community hubs where we welcome all people, regardless of their religiosity. Slowly, a bond might develop between them and the Islamic community. Right now, we almost require this bond and religiosity as a prerequisite for anyone to become part of the congregation.”

These issues, urgent as they are, don’t characterize the entire Muslim community as I’ve experienced it over the past decade. There are millions of Muslims in Canada and the United States; robotic uniformity is hard to come by. Common problems exist, but in my experience, they’re usually dealt with swiftly.

The forced closures during the ongoing pandemic present an opportunity to do things differently and to start addressing rifts within the community. Virtual gatherings have allowed people from all walks of life to attend whatever they feel like in the community without the scrutinizing gaze of others. And, as Ghaffar-Siddiqui points out, many women have long been accustomed to carving out spiritual spaces outside the mosque.

“We’ve been praying at home and creating spiritual sanctuaries in our homes, for our children and ourselves, for years,” she says. As a result of COVID-19, she predicts, “homes are going to become more spaces of worship than they were.”

“I’m finding that I’m more personally connected to individual family members this Ramadan, through WhatsApp and video calls, than ever before,” Waeza Afzal told me a month ago. “I tried going to traditional mosque spaces in the past and honestly didn’t feel comfortable. I found it austere,” she says. She’s since become involved in more inclusive mosques. “But being under quarantine has helped me get away from practising the faith in a way that’s just going through the motions. Instead, I do things out of a desire to connect more deeply.”

It’s possible that, even if people abandon larger, more formal Zoom gatherings after the pandemic, some Muslims who have felt marginalized over the years will continue to connect with their community through smaller virtual gatherings and conversations. But, in my view, no virtual space can truly erase the centrality of mosques for Islam and for a significant number of Muslims. The physical sacred spaces cannot be replaced, which means making them more equitable is crucial for fostering a spiritual community. As the country tentatively reopens, Muslim groups will have to face up to that challenge.

“This disease is forcing everyone to confront uncertainty,” Afzal adds. “Not just societal uncertainty but personal uncertainty, which makes me want to connect more spiritually—to surrender to the unknown. Faith is good for that.”

Steven Zhou has had his work published in the Globe and Mail, Foreign Policy, and The Nation.