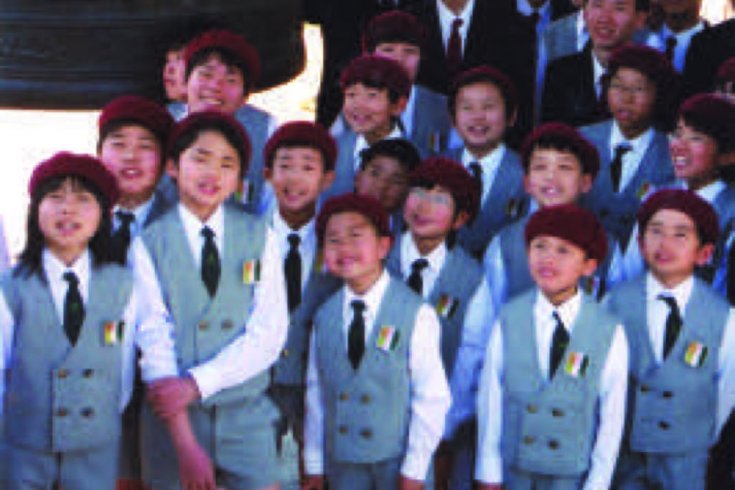 During its recent American tour, a boys’ choir from Hiroshima stopped off in the town that enriched the uranium for the bomb that flattened their city. / Photograph by Marcello di Cintio

oak ridge — The town of Oak Ridge, Tennessee, population 27,387, was built in 1942 for the sole purpose of enriching uranium for the Manhattan Project. In its first seven years of existence, the town appeared on no maps and was ringed with a fence patrolled by armed guards. Residents were forbidden to talk about the goings-on in the three high-security factories. Few even knew what they were working toward. They were recruited from around the country, offered engineering and construction jobs, and told only that they were assisting with the war effort.

When the United States dropped the first nuclear bomb on Japan during World War II, the headline in the local paper boasted “Oak Ridge Attacks Japanese.” Only then did most citizens realize what they had been doing for the last three years. In 1949, the security fences came down and Oak Ridge was opened to the outside world for the first time.

Although the town’s original graphite reactor is now a museum piece, Oak Ridge’s economy still revolves around nuclear research. And Oak Ridgers haven’t forgotten the circumstances of the city’s birth, which they have found unusual ways to commemorate. At the Jefferson Soda Fountain, for example, alongside homemade biscuits and buttermilk by the glass, you can order a Little Boy or Fat Man burger, named after the bombs dropped on Hiroshima and Nagasaki, respectively. The restaurant also serves up a Manhattan Project chicken dinner.

Another marker, an atomic symbol, graces the red brick exterior of Oak Ridge High School. In the school auditorium last March, twenty-nine members of the Hiroshima Boys’ Choir, aged nine to eighteen, stood on the stage clad in grey tweed shorts and vests, black ties, and knee-length socks. Smiling, they sang the story of Sadako Sasaki, a Hiroshima girl who died of leukemia about ten years after the bomb was dropped. The Oak Ridge students slouched in their seats, but rose to offer an enthusiastic ovation when the program was done.

Afterward, the choir exchanged gifts with Oak Ridge mayor Dave Bradshaw. The choir director, Hisao Hayashi, helped Bradshaw slip a blue kimono-style jacket over his suit, then read a letter from the mayor of Hiroshima expressing hope for friendship, goodwill, and the abolition of nuclear weapons. It was the same letter Hayashi had read at the choir’s previous performances in Washington and Philadelphia. Bradshaw responded with a message of welcome, which was then translated into Japanese. Neither mentioned the singular connection between the Oak Ridge students and the Japanese choir boys: that on August 6, 1945, a bomb built by the ancestors of the former was dropped on the ancestors of the latter.

After their performance, the choir ate thin pizza on paper plates at Big Ed’s. They steered clear of the nuclear fare at the Jefferson Fountain, the irony of lunching on Little Boy burgers perhaps a little too rich. Such ironies were hard to avoid, however. Oak Ridge is home to the Atomic City Sports Bar, a gathering place for local bikers, and the Atomic Pawn shop. Each week the Oak Ridge Observer rates new movies out of five atoms. The annual Secret City Festival celebrates Oak Ridge’s contribution to the end of World War II with battle re-enactments, historical displays, and Elvis impersonators. And colouring books for sale in the gift shop of the Children’s Museum of Oak Ridge allow young visitors to colour a mushroom cloud rising over Hiroshima.

It is not surprising, then, that most Oak Ridgers, especially Manhattan Project veterans, are unrepentant about their nuclear accomplishments. They insist that the atomic bomb ended the Second World War and saved countless lives, though they are careful not to glory in the loss of life in Hiroshima and Nagasaki. “We are proud of what we accomplished and we embrace it,” Bradshaw said. “But we also put it into its historical place.” In the school cafeteria, Jerralyn Luckmann, who helped organize the tour, said activities such as the choir visit were not about the bomb, but were “essential to mend fences and to encourage cultural understanding.” She was careful to add, however, that “this is not an apology.”

The afternoon following the concert, the choir visited the International Friendship Bell, which was erected in 1996. The four-ton bell, designed in Oak Ridge and cast in Tokyo, reflected a desire for world peace, but it generated considerable controversy in the town. Many citizens felt that it symbolized an apology to Japan, and they succeeded in getting the town to ring the bell only on special occasions. It wasn’t until 2001 that a grade-eight student named Elise Campbell successfully petitioned the city to allow the bell to be rung anytime.

As we walked past the bell, I asked Hayashi about the meaning of performing in the birthplace of the bomb. He shuffled uncomfortably in his sleek black suit. “What happened in the past is in the past,” he said. “I only hope that these children never know war.” He tilted his chin toward his young charges, who were taking turns ringing the gigantic bell and seeing who could create the loudest clang. Its significance seemed lost on them. They were little boys on an overseas adventure, most of them three generations removed from the horrors of World War II—too young to notice Oak Ridge’s profusion of atomic kitsch. They were interested mainly in having fun. I recalled what Jerralyn Luckmann had told me earlier that day when I asked about the boys’ view of the cultural lessons on offer: “Their thoughts are from one Coke machine to the next.”

Marcello Di Cintio is the author of five books, including Driven: The Secret Lives of Taxi Drivers (2021), which was a Globe and Mail Book of the Year.