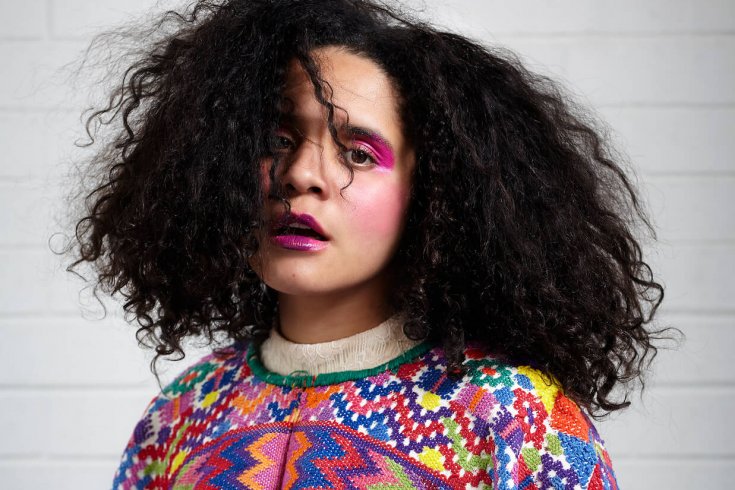 Before we get into this year’s Polaris Music Prize winner, a lesson in the tarot.

In the traditional tarot deck, the High Priestess—La Papessa—is an over-the-top clash of Judeo-Christian iconography and occult mysticism. She is classically depicted in vaguely papal garb, holding a Torah scroll beneath the prominent cross on her chest; her skirt pools at her feet, scythed by a suspiciously pagan-looking yellow crescent moon. For the early twentieth-century British mystic A. E. Waite, the High Priestess is a study in contradictions. Though broadly dismissed as an instrument of occult science, the High Priestess “is really the Secret Church, the House which is of God and man.” Basically, she’s complicated: La Papessa is not exactly what she appears.

In the here and now of Canadian arts, La Papessa resonates loudest as the name of Colombian Canadian artist Lido Pimienta’s Polaris prize–winning 2016 album. That the album was recorded in Spanish instead of either of the country’s two official languages may help render it, counterintuitively, the most Canadian Polaris winner yet—a contradiction, a surprise.

Both album and artist inadvertently echo the paradox implicit in “Canadian music”: the suggestion that Canada is an entity that’s somehow linguistically or culturally fixed, instead of one whose identity is constantly being contended, debated, and revised. What it means to belong in Canada is similarly variable and, perhaps, especially amorphous for an artist who has been making music here for the entirety of her recording career yet whose music has not entirely escaped—within Canada—the diminishing designation of world music.

Pimienta, now thirty-one, was a teen when she moved with her mother to London, Ontario, from her native Barranquilla, Colombia. She’s since been vocal about the hypocrisy of a national identity that flaunts its multiculturalism while its cultural institutions clumsily fumble at meaningful, diverse representation—that ostracizes minorities while occupying stolen Indigenous land. This particular conflict about Canadian self-definition is a personal one for Pimienta. In an interview last year, she told me that while she sometimes feels like she’s not Colombian anymore, “I know that I’m definitely not Canadian either.”

She’s aware of the potential implications of her win as a Latinx immigrant artist and told reporters after the gala that she feels honoured to be able show people that “you don’t have to be skinny or blonde or sing in English or French” to forge a career. Skinny blondeness aside, the English or French qualifier is significant; Canadian music has yet to launch a mainstream star in a language that isn’t one of the country’s official two. (Tanya Tagaq won the 2014 Polaris for Animism—which was largely non-linguistic, period—but its ties to an explicitly Inuit tradition of throat singing seem to have minimized considerations of Canadianness.) And yet the 2016 census concluded that some 7.3 million Canadians report speaking some language other than English or French at home. Maybe Pimienta isn’t an anomaly but a bellwether.

Pimienta’s 2010 debut EP, Color (as in the Spanish spelling of colour and not that of our American neighbours), christened her an indie It Girl of the Ibero-American underground music landscape—a world, it’s worth pointing out, that’s far larger in population and wider-reaching in square kilometres than the landmass we call Canada. Though it didn’t make Pimienta a household name, Color landed her international festival tour spots and NPR-approved collaborations. The album remains a dance-floor-friendly electronic pop confection, propelled by the cha-ch-ch backbeat of Colombian cumbia.

Color capitalized on a then blossoming electropop subgenre that radiated outward from South America, reaching all the way to the London, Ontario, studio where Pimienta’s album was made. At the time, the Buenos Aires–based label ZZK Records was putting out digitized reconfigurations of Afro-Colombian folk rhythms that in the early 2010s a modest global audience couldn’t get enough of. Color was a family affair, too, mixed by Pimienta’s then husband, Michael Ramey, while their toddler son played nearby.

Pimienta’s pliant and primal soprano drew immediate comparisons to Björk. “’The Björk of cumbia,’” she once repeated to me, wrinkling her nose in distaste. The analogy didn’t seem to fit in her mind, though the artists do have some superficial characteristics—and rigorous classical training—in common. Like her Icelandic maybe-counterpart, Pimienta has a voice that acts as a megaphone for the space between heartbeats, giving sound to what can usually only be felt.

The release of Color marked the end of Pimienta’s marriage. With her young son in tow, she moved to Toronto and began a curatorial degree at OCAD University, meanwhile launching a punk-informed stage persona that married art-school sensibilities with brazen anti-colonial politics. “Oh KKKanada,” she howled at a 2014 Wavelength performance, “our home ON Native land.” During this time, she wrote the songs that would make up the bulk of La Papessa: “Agua,” a paean to the earth’s life-sustaining water supply (and side-eye to those who hoard it); “Ruleta,” about familial dissolution and its attendant maternal guilt.

La Papessa isn’t aesthetically worlds away from its predecessor. It relies less on the nu-cumbia conventions that were in fashion in the earlier parts of the decade and leans harder into an anti-colonial, anti-patriarchal sensibility in its lyrics. But both albums are fundamentally (if unconventionally) boppy, their stylistic flourishes belying a pop composer’s ear for melody and knack for a memorable hook. La Papessa is also a more straightforwardly autobiographical effort, a real-time reflection of the grief and rebuilding that befell Pimienta during the course of its production.

Pimienta named the album for the occult-adjacent tarot priestess, whose strength and contradictions felt symbolic as she regained control of her life and art in the absence of a partner who had also been her co-parent and chief collaborator. The project took more than three years to put together and provided Pimienta with an immersive track-by-track education in music production. During that time, it was also stalled, unexpectedly, by tragedy. First came the cancer diagnosis of Pimienta’s friend and musical collaborator. Shortly after, came the death of Pimienta’s younger brother.

Pimienta doesn’t believe in a god; for her, art brings deliverance. But Pimienta was raised Christian and her mother remains devout. Like the High Priestess of the tarot, Pimienta needed to meet her family somewhere between the biblical and the ineffable. By the time she finished mastering La Papessa in late 2015, Pimienta was itching to show the world what she’d made. She shopped the album around to various record labels, but they dragged their feet, offering release dates that stretched into 2017. Pimienta had waited long enough. In October 2016, she released the album herself.

The self-released La Papessa had been widely pegged an underdog candidate for the Polaris. Pimienta certainly wasn’t expecting it. And, as many have remarked since, she did not take to the stage with the wallflower gratitude people seemed to expect from the dark horse winner of a grand and prestigious award—especially, the implication goes, in Canada.

“I don’t wanna throw shade, but when I was up here I could not hear myself,” she said onstage, with her mother and nine-year-old son in tow. “My monitors were not fucking working.” Pimienta has since reiterated her gratitude for the Polaris recognition but stands behind her stage tech annoyance. If there’s one thing Pimienta doesn’t do, it’s demur—a trait that might be read as an indictment among those still tempted to conflate clenched Anglo-Saxon propriety with true Canadianness.

But just as Canada has never been a monolith of buttoned-up Commonwealth Protestants solemnly warbling hymns, its music landscape defies facile nationalistic reduction. If Canadian culture contains the world, so-called “world music” is the height of Canadiana. How lucky we are, at long last, to enjoy it.

Kelli María Korducki is the author of Hard to Do: The Surprising, Feminist History of Breaking Up. In addition to The Walrus, she has written for the New York Times, the New York Times Magazine, and the Guardian. She lives in New York City.