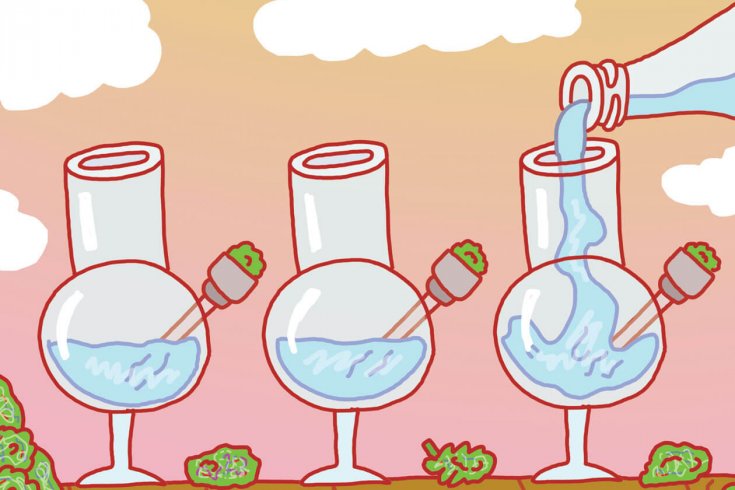 Aquick Google search will reveal the following of the popular marijuana breed known as Bubba Kush: “Sweet hashish flavors with subtle notes of chocolate and coffee come through on the exhale, delighting the palate as powerful relaxation takes over. From head to toe, muscles ease with heaviness as dreamy euphoria blankets the mind, crushing stress while coercing happy moods.”

This description is from the popular website Leafly, which bills itself as the largest marijuana resource in the world and lists detailed tasting notes on thousands of strains that can be purchased across the globe. If you know your weed, you may already be familiar with names like Blue Dream, Green Crack, or OG Kush, each promising a distinct experience. Some claim to induce sleepiness or increase appetite, others to provide a sense of happiness and well-being. In addition to varying concentrations of the active chemical THC—the compound that gets users high—different strains also boast complex offerings of terpenes: aromatic organic compounds that can subtly alter the flavour and smell of cannabis (and, some claim, even the effects of a high).

It is hoped that legalization will end the illicit trade in this comparatively benign inebriant. But the new law will do more than that. It will reduce social stigma and spur investment; legalization will foster the growing culture of cannabis connoisseurship, complemented with a growing array of swanky consumer products like luxury humidors and space-age vaporizers. While the federal government has set strict guidelines for how marijuana can be marketed, expect high-end retailers to come equipped with knowledgeable salespeople—weed sommeliers who can guide the willing consumer into bespoke euphoric realms.

Canada is creating a new market, and as with any startup industry, expect the sales pitches to be laced with a dose of hype. CIBC estimates that the legal marijuana market in Canada will approach $6.5 billion by 2020—nearly as much as wine sales. And, like wine tasting, much of the marketing around the product will almost certainly be bunk.

The best way to get a sense of how things will unfold is to look south of the border: as one of the first states to legalize weed in the United States, Colorado boasts one of the most established and advanced retail-marijuana markets. Walk into a cannabis shop there and the first thing you’ll likely be asked for is your ID. Once your age is confirmed, says Sam Homsi, regional director at the Rocky Mountain High and Cannabis Station dispensary chains, you are let into the actual store. But even then, there are strict limits on how he can sell his wares. Colorado law prohibits retailers from advertising on any radio, television, print, or internet outlet where more than 30 percent of the audience is younger than twenty-one years old. And retailers like Homsi are forbidden from suggesting particular strains for specific desires or ailments, although salespeople are permitted to make personal recommendations based on their own experiences with a brand. (In Canada, marketing will be even more restrictive: marijuana will be sold in plain packaging affixed with clear health warnings.)

Yet even with these restrictions in place, the price of an ounce (twenty-eight grams) of marijuana in Colorado stores can vary widely—from $20 to $500 (US), according to WikiLeaf, an online price tracker. And the difference between high- and low-quality bud doesn’t just have to do with the amount of THC, retailers say. “Some cannabis might give you dry mouth, it might make you hungry or more sociable—those are based on the terpene profiles and cannabinoids,” Homsi explains. Customers “are also looking at the bud structure, the smell. Always a big one is the smell.”

A cheap ounce looks very different from an expensive one. Cheaper cannabis may be a little older. Maybe the plant didn’t quite turn out the way the grower expected—like a perfectly good but misshapen apple on discount at the grocery store, it may not have the shape, colour, or smell that the strain genetics promised. More expensive marijuana also tends to be hand trimmed rather than machine trimmed—the latter process can damage the delicate psychoactive crystals on the plant. Of course, like with any other produce, price is also set by reputation: some strains of marijuana are more popular than others.

Pitching any of this to consumers presumes that vendors are delivering a reliable and consistent product—that a new batch of your favourite strain will offer the same effects as the last. It turns out that is a difficult claim to make.

Commercial cannabis is largely propagated through cloning, so strains like Bubba Kush and Blue Dream should be genetically nearly identical from store to store—that is, if they are what they claim to be. Anna Schwabe, a PhD candidate who studies plant genetics at the University of Northern Colorado, decided to test this presumption. She travelled around Colorado, California, and Washington, collecting dozens of marijuana samples and then comparing their genetic signatures to see if dispensaries were all selling the same thing under the same names. (She had to extract the DNA on the road or at home—the university risked its federal funding if it experimented with the actual plant material on campus without receiving a special licence from the US Drug Enforcement Administration.)

What Schwabe found is that many of them absolutely were not: even widely carried and popular strains, like Sour Diesel and Blue Dream, often contained at least one major genetic outlier among her set of samples. Only a few strains were genetically similar across dispensaries. “Nobody is purposely being malicious or making stuff up,” she says. “What I think we have is years of underground growing and trading, with no verification or certification.”

This lack of standardization foretells potential problems for the Canadian recreational-marijuana market: there is nothing to stop an unethical dispensary owner from simply relabelling a less expensive or less popular product. What’s even more interesting about this experiment, however, is that whatever buzz there may be around specific strains, it seems as if not even dispensary owners can reliably tell the difference between them.

Legalization in the US has led to growth in investment; companies are striving to create a more predictable and pleasurable experience. One company called Dosist (“delivering health and happiness”) is now offering recyclable vape pens that supply specific THC and terpene profiles; the pens are sold in minimalist packaging with names like Calm, Bliss, Sleep, Relief, and Passion.

More attention is also being paid to the craft of growing and processing the plant. Last year in the US two advocacy groups merged to create the Cannabis Certification Council, which will approve organically grown marijuana. Pesticides are a growing concern for those who prefer “dabbing”—inhaling vaporized marijuana oils or solids that have been concentrated. Concentration not only makes the product more potent with THC, it may also increase the relative amount of any pesticides that were used to grow the plant.

Health-conscious consumers can also opt for more naturally concentrated forms of marijuana. For example, the oils used in vape pens are traditionally extracted using solvents like butane. Those who find the thought of smoking lighter fluid a little off-putting may want to consider a concentrate called rosin, which is extracted using simple heat and pressure. In the US, even Walmart got into this game for a time, selling an industrial-looking rosin press for $299 (US).

There are still a lot of unanswered questions about how, exactly, the components of marijuana work together to deliver its delightful, euphoric effects. “It’s important for consumers to understand what are the valuable components in the product itself,” says Josh Kaplan, a professor of behavioural neuroscience at Western Washington University. “Is it just THC and [the cannabinoid] CBD? And is everything else just smoke and mirrors?” he asks. “I believe that, based on the research out there that has looked at the benefits of terpenes…there is something to it. Yes, THC, yes CBD, those are probably the most important elements. But,” he estimates, “if that takes you 75 to 80 percent of the way, the other 20 is going to come from other components.”

One could probably make a similar claim about the taste of wine. Yet very few people have a palate capable of detecting the difference between a $20, $100, or $1,000 bottle. For most of us, a wine splurge is simply a show of status.

Marijuana looks set to follow that path. How much of the marketing around it is going to be, simply, just hype? There isn’t an easy answer to that question, says Rebecca Jesseman, the director of policy at the Canadian Centre on Substance Use and Addiction. “You can ask the same question of wine connoisseurs: What makes the best wine? It comes down to the individual.”

Jen Gerson is a freelance journalist based in Calgary.
Joren Cull