Keeping the Republic Together | The Walrus
Skip to content 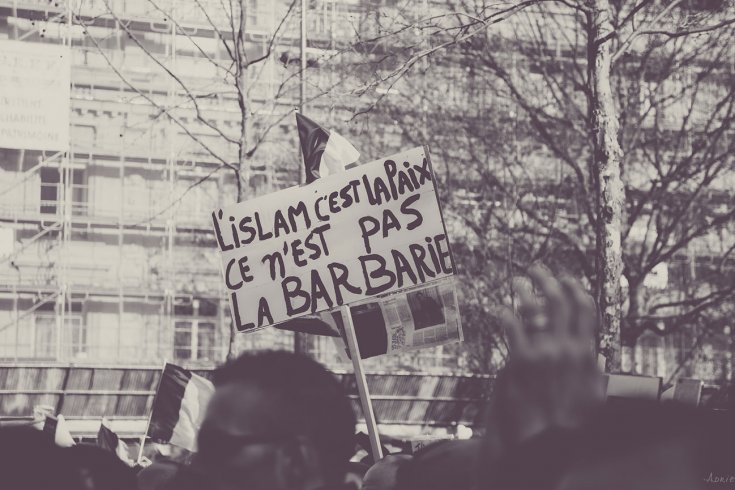 The attacks on the offices of Charlie Hebdo and the Hyper Cacher market in Paris shocked France and the world. But the country has been struggling with Islamist terrorism for decades. During the 1990s, the most spectacular episode was the hijacking of an Air France Flight 8969 on Christmas Eve 1994. The plane’s 220 passengers and twelve crew were to be blown up by Algerian jihadists over the Eiffel Tower, but the plot failed when the GIGA—the French anti-terrorism police, who also killed the Charlie Hebdo killers at a printing plant northeast of Paris on January 9—stormed the jet in Marseilles, killing the four Algerian hijackers. An Algerian direct-action bombing campaign followed in 1995 (on July 25, August 17, September 7, October 6, and October 17) with terrorist attacks targeting Parisians commuting on the metro. Then in March 1996, in an attack that traumatized France, seven monks at Notre Dame d’Atlas de Tibhirine in Algeria were kidnapped and beheaded under shadowy circumstances typical of the so-called dirty war then ravaging that country.

Nor is this the first time France has had to deal with deadly hatred of Jews. Indeed, for a country tainted by Nazi collaboration, the recent spike in anti-Semitic attacks (527 reported in the first half of 2014 alone) weighs heavily on the French. Not-so-distant historical events such as the Rafle du Vélodrome d’Hiver (when in 1942 thousands of Jewish citizens were arrested and deported to Auschwitz) are part of the collective memory—which is why the killing of four Jews last Friday hit a deep chord. A growing number of French Jews now say they plan to emigrate, in many cases to Israel.

In part, today’s anti-Semitic discourse is rooted in the French ultra-right National Front, which has no resonance with the country’s mainstream Muslim community. The NF was for many years spearheaded by the none-too-tepid racist Jean-Marie Le Pen. But it now is overseen by his more media-savvy daughter, Marine. In recent days, she has attempted to galvanize support for her growing anti-immigrant movement by calling into question the loyalty of Muslims in France who do not embrace the country’s republican, secular values. (The irony here is not lost on scholars, such as myself, who would point out that NF xenophobia itself comprises a rejection of true republican values.)

French comedian Dieudonné M’bala M’bala—who already had established himself as a controversial figure—now faces up to seven years in prison for using Facebook to declare his apparent solidarity with the Kosher-market murderer (“Tonight, as far as I’m concerned, I feel like Charlie Coulibaly”). The arrest seemed hypocritical for a nation seeking to reaffirm its protection of speech—even highly irreverent speech.

As is well known in France, Dieudonné has become a lightning rod for hate speech, mixing immigrant politics and offensive anti-Semitic comedic sketches (something I abhor). And this is not the first time he has been prosecuted for sliding too close to the criminal line. He is credited (if that is the right word) with creating the so-called quenelle, an infamous gesture sometimes seen at soccer matches that critics liken to the Nazi salute.

Shouldn’t there be a universal free-speech standard in a country that claims to represent universal values, as the self-coroneted king of French intellectuals, Bernard-Henry Lévy, would have the world believe? Then again, this is a country that has used its laïcité laws to prohibit the wearing of the veil on the grounds that such overt displays of devotion subvert the cohesive nature of the republic. “French first,” as the saying goes.

The current idea of republican solidarity vis-à-vis secularism originated in the nineteenth century, at a time when France was transitioning from a society of agrarian peasants to one of urban-based industry. As Eugen Weber notes in Peasants into Frenchmen: Modernization of Rural France, 1870-1914, peasants acculturated into the idea of the republic almost as “savages”—a process of acculturation that came about only though sustained intervention by the state.

The problem of acculturation that France confronts today is very different—for it takes place not among “savages,” but among members of well-established immigrant cultures inhabiting a postmodern, post-industrial, post-colonial world. The argument that you can project a late nineteenth-century’s vision of secularity and national identity onto diverse populations that are neither primarily peasant nor Catholic is bound to encounter pushback among the five million North Africans now living in the country.

France will need to provide its disaffected populations more incentive to buy into the republican model. Farmers coming into political consciousness after the French Revolution and the Napoleonic Wars were willing to put aside their old identities because they had just been liberated from serfdom. Rejecting their old identities was less of a sacrifice. Today, by contrast, the rejection of one’s cosmopolitan identity runs contrary to the spirit of multiculturalism.

And therein lies the paradox at the heart of France’s problem. The project to combat racism, Islamophobia, anti-Semitism, and alienation is worthy and progressive. Yet France is pursuing it through methods that seem culturally zero-sum, and which come from an age of empire and colonialism.

None of this should serve to condone the despicable sentiments of Dieudonné. But he is not the true enemy. He is merely an extremely vulgar, offensive comedian on the other side of the Charlie Hebdo coin. And his arrest serves only to illustrate the fragility of the French republic itself, which is uncomfortable with universal laws and norms for all its offensive citizens.