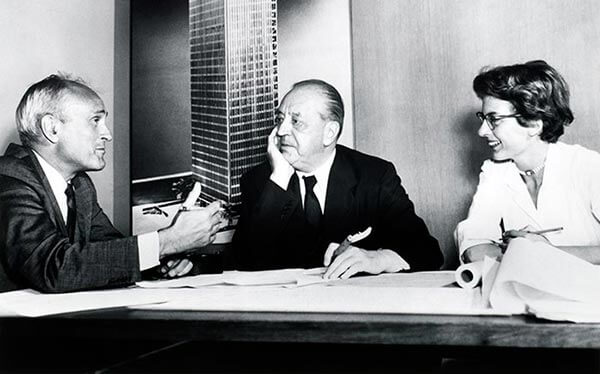 Image courtesy of the Canadian Centre for Architecture

Phyllis Lambert can make grown men twist like steel in a fire. Architect Peter Busby still recalls one of his first encounters with her, in the early ’90s. During a question and answer session after a speech, he segued into Quebec politics (risky) before a Montreal audience (riskier) that included the formidable Lambert (riskier still). His subject was not politics per se, but its effect on the built environment; he argued that Expo 67’s architectural legacy had been compromised by the political divisions between Ottawa and Quebec City. Lambert roared from the back of the hall: Who is this man? You’re a pipsqueak! You’re totally ignorant! You don’t belong here! Or words to that effect. Busby was approached afterward by Raymond Moriyama, the architect who designed the Canadian War Museum, among other big commissions. “Peter, we’ve all been there,” Moriyama told his flustered colleague, patting him on the back. “She’ll respect you eventually. You have to serve your time.”

Here is the paradox: despite their public floggings, Busby and Moriyama express unwavering reverence for Lambert, whom they now consider a friend. Few in the North American architectural community summon up such an odd conflation of fear and adoration. But she has done the profession so much good, first as the force behind Mies van der Rohe’s iconic Seagram Building in New York, and later as the founder of the Canadian Centre for Architecture in Montreal—always the relentless advocate for good design. As you learn more about her upbringing, you begin to understand: when you’re born a Bronfman girl, you need to holler to be heard.

Her new book, Building Seagram, is a lavish, exhaustively researched history, monograph, and tribute to the construction in 1958 of Seagram’s office tower in Manhattan. Her role in commissioning the elegant glass, steel, and bronze edifice is among the creation myths of high modernism. The story begins in 1954 when she was a sculptor living in Paris. Her father, Sam Bronfman, is about to commission a generic office block to house Seagram’s New York headquarters. On seeing the plans, she writes him an eight-page letter summed up by five words in the first paragraph: “NO NO NO NO NO.” She rushes back to New York and persuades him, under her guidance, to seek out the finest architects in the world. The last name left on the short list is Mies van der Rohe. She then steps in as director of planning, steering the building into the annals of architectural history as one of the best of the twentieth century—even, as New York Times critic Herbert Muschamp would later describe it, the best of the millennium.

The thirty-eight-storey tower she championed was elegantly formidable, dauntingly precise, steely, and paradigm busting. In 1954, she wrote of Mies’s approach, “You might think this austere strength, this ugly beauty, is terribly severe. It is, and yet all the more beauty in it.” The same words could be used to describe Lambert herself, although in a recent interview she seemed equanimous about her reputation as a person who does not suffer fools gladly. “Am I known for that? ” she asks with a smile. “Well, I just say what I think.”

Phyllis Barbara Bronfman was born in 1927, as her father was expanding the family liquor business south of the border at the height of Prohibition. (Her eventual surname came from a brief, youthful marriage to French banker Jean Lambert.) The family’s experience shaped her—not because they were rich, she says, but because they were outcasts of a sort. “In Montreal, we were outside the major social strata because, first of all, we were Jewish; and second, because of the liquor thing. So my father struggled to get any sort of recognition, and I was quite aware of that.” Sam Bronfman was rarely around, except for Friday dinner and Sunday lunch. Years later, when she was launching the CCA, she would understand the all-consuming stresses an entrepreneur experiences constructing something huge. “All I knew as a child was that he was fierce!” she says. Whatever family attention he could muster went disproportionately to her two brothers: “Boys were wonderful, and girls were just there,” she says. “But I always stood up to him.”

Working on the Seagram Building, she was the lone female in the dress circle of mid-century New York power, but she had not yet felt the sting of being underestimated because of her gender. She was, after all, the director of planning; and her father was, after all, the head of the company. “I might say, ‘The sky is—orange,’ ” she recalls, “and then everybody around me would say, ‘Yes, Mrs. Lambert.’ It irritated me terribly.” This changed when, after the office tower’s completion, she went into partnership with architect Gene Summers, working on such projects as the renovation of the Biltmore Hotel in Los Angeles. “We’d go somewhere, and people would either think I was his secretary, or maybe I did the interiors,” she says. “Someone wanted to write an article about me for the New York Times, for the women’s pages, and I refused. I said, ‘I’m not going to be a women’s page article. I’m not going to be typecast that way.’ ” She decided to go back to Montreal, site of Seagram’s erstwhile head office, but it was not an instance of the prodigal daughter returning home, she insists. It was just that Montreal, and Canada, presented blank slates. “There was something to be made in Canada, whereas New York and Chicago were already pretty well made.”

She became a ferocious advocate for Montreal’s architectural heritage; she campaigned for better contemporary architecture and championed those who could produce it. But her crowning achievement was the Canadian Centre for Architecture, established in 1979. The 130,000-square-foot limestone museum, completed ten years later, is among the most important centres for architectural research, drawings, exhibitions, lectures, and books, with archives of numerous leading architects. “There is no rival institution in North America, and hardly any in the world,” says Peter Busby. (Lambert, by the way, banished him for fifteen years, rebuffing his periodic attempts at reconciliation, before she called him one day to invite him for a private tour of the CCA. It was a signal that he had done his time.)

For all of her wealth and achievement, Lambert is without pretension. During a recent visit to Vancouver, she was in her element, not at a five-star hotel but at the scruffy suburban home of artist friends, the rooms strewn with toddler flotsam. Those who know her well say such choices reflect her true nature, which she unpacks only when the klieg lights and sycophants are gone. “She just needs space with people to decompress,” observes Vancouver architect Bing Thom. He and Lambert became instant friends when she invited him to dinner in Montreal—a meal of takeout sushi consumed in the back of her SUV, with a spirited black Bouvier sitting alongside them. “So much is expected of her, it’s important to realize that she’s just a regular person,” he says. “She’s always had so much responsibility to carry the torch for Canadian architecture, but thank God we have her to do it.”

Since Lambert retired as director of the CCA in 1999, she has devoted herself to special projects, and the Seagram book, which was ten years in the making. “I love writing, and I’m going to continue,” she says. “I’m investigating something else right now.” What it is, she won’t say, but it’s a safe bet that it will be yet another attempt to advance the idea that has been her life’s work: collective self-betterment through architecture. “It’s important to have a society in which people can grow and respect themselves, and one in which you pay respect to the architectural environment, and get joy from it,” she says. “But most of the time, it’s all about the bottom line.” That was certainly her father’s obsession: “He said that making money was the thing, that artists weren’t really important in society, and that it was the businessman who allowed the artist to work,” she says. “I said back to him, ‘Yeah, but who gets remembered in the end? ’ ”

Phyllis Lambert will be remembered by anyone who values architecture, long after her once-famous relatives have faded away in back issues of Forbes.