In Shined Shoes, a Reflection of How We Glamorize Menial Work | The Walrus
Skip to content 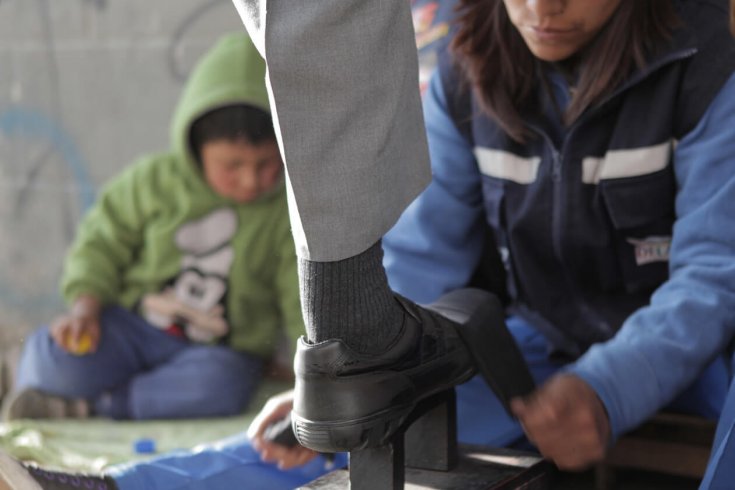 While I lined up outside Toronto’s Isabel Bader Theatre for Saturday’s showing of Shiners—Canadian filmmaker Stacey Tenenbaum’s entry in this year’s Hot Docs festival—a volunteer handed us all shoe-shine kits. This was more than just a cute piece of swag: It also saved me a late-night trip to the drug store. Tenenbaum’s creation likely is the only documentary film in history that leaves audience members with a burning desire to go home and shine their shoes.

That’s because the protagonists in Shiners—professional shoe-shiners in Toronto, Sarajevo, La Paz, New York, and Tokyo—take great pride in their work. And the shots of lovingly polished footwear contrasted painfully with the filthy black wingtips I saw when I reached down to collect my bag after the house lights had come on.

In the Q&A that followed the Shiners screening (one of three at this year’s Hot Docs, with a final showing tonight at 9:30pm), Tenenbaum was asked how she’d chosen her subjects. Her answer was vague, and suggested that she’d relied mostly on local fixers. But I’m doubtful—because her artful choice of subjects not only provided a wonderfully broad range of geographical diversity, but also five completely different theories of the shoe-shine trade. This sort of casting doesn’t happen by accident.

In New York, Don provides us with the stereotypical old-school, street-corner shoe-shining wiseacre, who combines tradecraft with hilarious putdowns of his prospective customers’ footwear hygiene. In Tokyo, by contrast, we meet a suit-and-tie shoeshine entrepreneur who runs his shop like a bespoke fashion house, complete with fluted champagne for his customers, and an ambitious trade philosophy that aims to boost Japan’s collective sense of self-worth through the power of leather lustre.

Though Tenenbaum doesn’t belabour the point (or, indeed, feature any filmed commentary from experts in fashion or retail culture), these two men represent the two poles of the modern consumer experience: consumption as quick-service convenience versus consumption as sensuous art form. Don charges five dollars for a shine and does his work quickly as his customers sit in a chair and flip through their phones. His Japanese counterpart, Yuya Hasegawa, charges five times as much. His customers remove their shoes and sit at a counter, fawning appreciatively while they watch the expert shiner do his work.

These Tokyo scenes powerfully evoke the status inversion that attends the modern focus on elbow grease, authenticity and ancient crafts. One of Yuya’s customers is rich enough to afford a thousand-dollar pair of shoes. Yet when Yuya is polishing them, the patron strikes a posture of awed subservience.

The other protagonists have less to say about the art of shoe-shining, but more in the way of the redemptive qualities of hard work. In Canada, we meet Vincent, an earnest and disarming young man who nearly lost his leg when his motorcycle was T-boned at an intersection. Traumatized and depressed during his convalescence, he turned to knitting and then shoe-shining. Now he serves as a Girl Friday to a trio of (almost self-parodically) old-fashioned barbers at the Nite Owl Barber Shop in the Toronto neighbourhood of Etobicoke. In New York City, similarly, Tenenbaum introduces us to a trio of shoeshiners who met during their efforts to recover from alcoholism. Wounded souls all, they keep their hands busy to prevent the return of bottled demons. (Based on their chipper live appearance during the Q&A following Saturday’s screening of Shiners, I’d say their project proceeds apace.)

The most memorable portraits emerge from La Paz, where shoeshiners are condescended to by the well-heeled as little more than beggars. Indeed, they are so ashamed of their profession that they wears masks to prevent old friends and classmates from recognizing them.

An exception is Sylvia, who distinguishes herself not only by being a woman, and refusing to wear a mask, but also taking her children out with her on the street. Her hard life—sometimes she takes home as little as five or six dollars a day—is inspiring. It is also profoundly sad, never more so than when we meet her husband, in a scene whose power and pathos you don’t quite understand until it is over. Indeed, one of the few flaws of this film is that it can feel unbalanced: Sylvia’s struggle to build a better life for her children makes for such great documentary film that the abstract musings of first-world shoe fetishists in Tokyo, Toronto, and New York occasionally seem vapid and affected by comparison.

Sylvia shows us how deeply conflicted, and even hypocritical, our attitude to menial work can be. Capitalist societies paper over their inequities by urging one and all to take pride in their work. But as Sylvia acknowledges in a candid moment, “Anyone can be a shoeshiner.” She wants her children to be “professionals.” And as a viewer, I was rooting for that outcome, too.

Only in a pampered, post-industrial society such as ours do we have the luxury of creating artisanal cults around labour that takes place at ankle level. After watching Shiners, I took joy in the experience of shining my shoes on my kitchen counter. But I cannot convince myself that this is something I would want my children to do for a living.