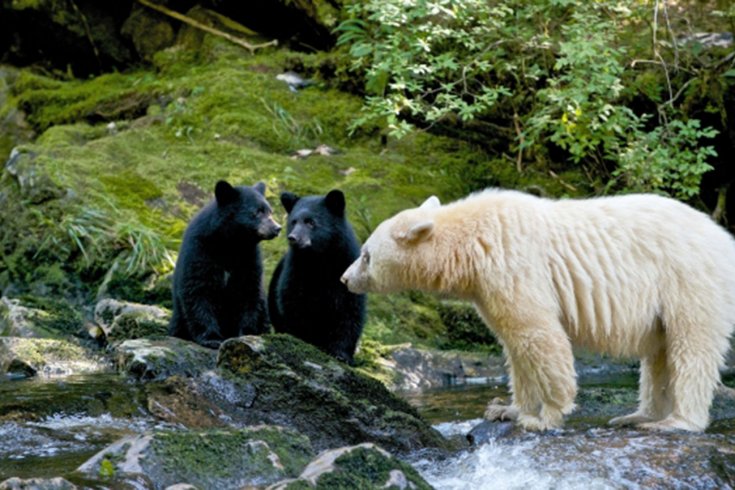 Jeff and Sue Turner are Canada’s preeminent wildlife filmmakers, with experience on BBC’s Planet Earth and Frozen Planet, and last year’s Wild Canada series for the CBC. A quarter century ago, they spent two years on a remote island in the Great Bear Rainforest capturing the elusive white spirit bear for the first time on film. The Turners’ new documentary, Spirit Bear Family, sees them return to the island to follow a mother spirit bear and her two black cubs.

Alex Tesar: Can you describe the island environment for someone who has never visited?

Jeff Turner: It’s an old-growth rainforest—a lush, highly productive landscape, which is partly due to the confluence of the northern Pacific Ocean, itself a very rich ocean, next to a coastal mountain range. This creates an environment that produces a lot of fresh water and the conditions that allow life to flourish. It’s a wild, beautiful place.

Alex Tesar: What makes the spirit bear so special?

Jeff Turner: It’s such a unique and surprising creature. We associate white animals with the Arctic, so something white in the middle of this dark green forest stands out. It’s also a kind of oxymoron in itself: a white, black bear.

Alex Tesar: So the spirit bear is a black bear?

Jeff Turner: It’s a colour phase of the North American black bear. It’s considered a subspecies now: Ursus americanus kermodei. There are actually various different colours of black bear that occur in North America. You can get cinnamon-coloured ones, dark chocolate brown ones, and in places in Alaska you can actually get blue-coloured ones called glacier bears. Here in BC we obviously have the unique white-coloured black bear. The colour is due to a double-recessive gene that the bears in that population carry, so it doesn’t always get expressed. Both parents need to carry the gene, but it’s possible for two black-coloured bears to have a white cub.

Alex Tesar: In Wild Canada, you made an effort to include humans as part of the story. How have humans historically helped to shape the ecosystem of the region?

Jeff Turner: As we talked about in Wild Canada, there are people like the Heiltsuk who have lived there for thousands of years and had an important influence on that area. There were a number of sequences in Wild Canada where we talked about harvesting fish eggs, clearing the streams, and spreading salmon. That’s such an integral part of the ecosystem of that forest: the relationship between the salmon, the trees, and everything else. So I think they’ve been quite involved in managing and maintaining that environment.

Alex Tesar: Is that still going on?

Jeff Turner: The federal government has lots of laws and regulations on that. The whole management of salmon is something that’s been done for many years by the Department of Fisheries. There are co-management treaties and ongoing negotiations, but there are also regulations now that preclude certain things from happening. I would doubt that resources are still being managed the way they once were.

Alex Tesar: Modern documentary films typically employ multiple camera teams across several locations. What was it like to approach this project as a family?

Jeff Turner: Wild Canada was a monolithic project with lots of people involved; there were millions of things happening all the time. So it’s nice to simplify all of that and just get to a single location with a single subject and spend a lot of time there. I was glad to have that experience again. It doesn’t happen very often, either, especially when you’re making a program about the wildlife in Canada. You see bits and pieces of the whole country, but you don’t get to spend a lot of time in any one space. Here, to do a film about a single place and animal, you can get into that environment in a much more profound way.

Alex Tesar: What kind of difficulties did you run into during filming? Were there any shots that were especially hard to get?

Jeff Turner: First of all, the rainforest can be a very wet place to work. That’s always a challenge with lots of cameras and lights. A lot of it is also about being able to find the animal and get close to them, and that takes time. We were able to work with people in the area that knew the bears’ locations well, which helped tremendously. When we made our spirit bear film twenty-five years ago, no one knew anything about the species; we had to go there and figure it out ourselves. We were out there for two years making our first film. But this time we could make the film in eight months, because there have been people out there studying them. The other challenge with wildlife films is that you’re always looking for new and interesting ways of telling the story. The technology helps to some extent. You’re able to get the camera in places that twenty-five years ago was really hard to do, like underwater, looking straight up at the bears as they fish. But it’s still challenging, and it takes a lot of trial and error to get it right.

Alex Tesar: Some documentary makers emphasize the importance of detachment from the subject. How close did you get to the bears over the months?

Jeff Turner: We always try to let the animal set the distance that they feel comfortable with. We let them approach us. Over time, if you do things right and you’re respectful, they can become very comfortable with you. In an ideal situation, you become almost a part of the background. But it requires investing time and developing a relationship.

Alex Tesar: The story follows a mother struggling to raise her two cubs. As a family of filmmakers, with your daughter and son, did that resonate with you?

Jeff Turner: I’ve spent enough of my life around wild animals to recognize many of my own struggles in life in theirs. What we care about—protecting our children, providing for them, seeing them on—is the same thing this mother bear is trying to do. It was a real privilege to be able to go back with our daughter and son to this place and see all this again. That was very special. It’s wonderful that we still have the chances to do that, and that this place is still able to do that, which I think is quite remarkable.

Alex Tesar: What was it like to revisit the Great Bear Rainforest twenty-five years later?

Jeff Turner: I was really impressed by the quality of that place. You can come back twenty-five years later, and still it seems to look and feel the same. There’s obviously more people around now; it’s more popular, and some of that is a result of the films that others and we have made. But it’s functioning and feeling very much like it did. It still feels like a wild and beautiful place.

Alex Tesar: What do you think the Great Bear Rainforest might be like if you were to revisit it twenty-five years from now?

Jeff Turner: I’m not sure. I hope it would still feel the same. There are still lots of people who are working and dedicating their lives to trying to keep it that way. There are a lot of eyes on it, and for a lot of people that live there—the Gitga’at, the Kitasoo, the Heiltsuk—that’s their home, and they don’t want it to change. There are many efforts trying to protect it and ensure the right decisions get made so that, twenty-five years on, we can get back there and it won’t feel so different. I have a lot of hope, and it feels like the potential is very much there for that to happen.

Alex Tesar: The documentary briefly mentions the impact of logging and potential future problems due with oil and gas shipping. As a filmmaker, how important is it to contextualize the places that you document within the human sphere?

Jeff Turner: It’s really important. There’s no doubt that there’s a place for beautiful nature films in and of themselves, but you have to inspire people to care about things. We can do that through spectacle and beauty, but at the same time we have to recognize that these places don’t exist in a vacuum. Humans are very much a part of this world, and things that we do have an impact. We didn’t want to make this film without mentioning that this place exists in the real world, and there are issues here. I hope people we be inspired by the beauty there is in our world and in places like the Great Bear Rainforest. There are amazing creatures out there that need our respect and attention. It’s worth reminding everyone that this is here, and when they think about the impacts that might be coming to this part of the world, perhaps they’ll remember that there are other things at stake. I also hope people come to feel something about these bears in particular; they’re very special animals and they deserve a lot of respect.