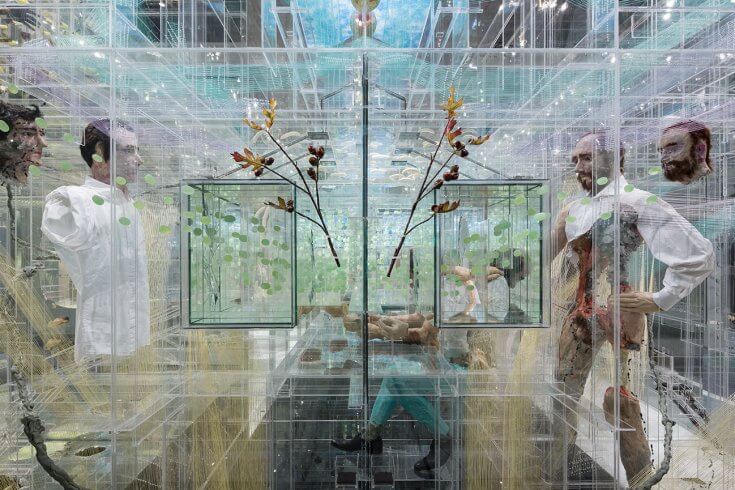 David Altmejd is looking for just the right hairpiece—and he needs six of them. His go-to wig emporium is Kikko USA Import, up a narrow staircase off Sixth Avenue, south of Manhattan’s Garment District. The employees greet him warmly. He selects a swooping Charles Bronson ’do, four in grey and two in brown. The proprietor adds up the bill with an abacus, and Altmejd pays and bounds downstairs. Today, he’s building werewolves.

The sculptor, who turns forty-one in July, is perhaps Canada’s most important mid-career artist. After growing up in Montreal and finishing art school at the Université du Québec à Montréal in 1998, he earned an MFA at Columbia University. Two years later, his work was featured at the 2003 Istanbul Biennial; it was then included in the 2004 Whitney Biennial (which, for perspective, is something like Magic Johnson winning MVP in his rookie season). In 2007, at thirty-two, he became the youngest artist ever to represent Canada at the Venice Biennale. In 2009, he won the Sobey Art Award, one of the richest prizes in Canadian art.

Altmejd’s sculptures—such as The Index, a sprawling, maze-like structure overgrown with synthetic flowers, dildos, and crystalline outcroppings, and inhabited by taxidermy rodents and life-size bird-human hybrids—are in the collections of the Art Gallery of Ontario, the National Gallery of Canada, the Solomon R. Guggenheim Museum, the Whitney Museum of American Art, and the Museum of Contemporary Art, Los Angeles. Last October, the Musée d’art moderne in Paris staged Flux, a major travelling survey billed as the artist’s first French retrospective. It’s stuffed with his trademark labyrinths and giants, and includes The Flux and the Puddle, the massive Plexiglas menagerie that’s been called his masterpiece. In June, that show opens at Montreal’s Musée d’art contemporain—the first Altmejd retrospective in his native country.

Despite these accolades, Altmejd is affable and unpretentious, as casual as his tennis shoes. His stubbled cheeks are roguish, and his eyes are bright and blue. Even though he’s lived in New York for fifteen years, his Québécois accent still turns a word such as metamorphosis into a song. The sculpture he’s shopping for today, he says, will animate one such metamorphosis—that of a man turning into a werewolf. He’ll document the transition over twenty heads, like the famous March of Progress illustration, but with lycanthropes instead of primates. “At one point,” he says, “it will turn into a coconut.”

Before pursuing art, Altmejd studied biology for a semester at McGill University. “My interest in art and my interest in biology are due to the same pleasure: looking at transformation and movement,” he says. He’s drawn to the notion of flux—everything changing all the time—as an alternative to the idea that there is such a thing as a perfect state of being. For him, the werewolf sums this up. The character has appeared in his work since the late ’90s. He’s even concocted a strange myth about it: the transformation from human to werewolf demands so much energy that if you were to decapitate the creature, the force released instantly would turn the head into a crystal. In platform sculptures such as The Academy and Delicate Men in Positions of Power, he uses the dismembered creature as a battery that circulates its power through the other elements of the piece via a gold chain or thread.

Altmejd wants his work to be alive. His sculpture delights in a seemingly infinite variety of life forms—biological, mathematical, imaginary—and in his role in their manufacture. At a time when cloning and genetic engineering have transcended science fiction, he’s at play in the sandbox of creation, pre-empting evolution, realizing what’s not yet possible. Perhaps most remarkable is the scale of his vision—how much life he’s able to contain in a single piece. An Altmejd work is better than any zoo.

At Toho Shoji, a jewellery-making superstore a few blocks from Bryant Park, Altmejd walks toward the bins at the back of the room. “Long time no see,” a clerk says. The sculptor has been buying his jewels, gold chains, and small crystal ornaments here for almost a decade. Right now, he needs an assortment of rhinestones. “I use them like bindis,” he says. “After I’m done with the head, I’ll strategically place a few of these to let energy enter or escape.” On a tray, he’s assembled a pleasing array of rust tones.

A few subway stops away, on the top floor of what was once a Long Island City pantyhose factory (or so the elevator operator says), Altmejd swings open the door to his studio, the day’s finds tucked under his arm. It’s an impressive facility. In one room, plaster and ceramic experiments. There are boxes, buckets, and a whole shelf of casts of the artist’s own hands. In another room, a woodworking shop, a metal shop, completed pieces in transit to collectors, cases full of sculpted fruit. Assistant Jessica Tsai dabs at a head with an underdeveloped snout—some late stage between man and wolf.

Both rooms are packed with sculptures, bodies of all sizes, giants ducking just below the four-metre ceilings, made from every imaginable material: polystyrene, mirrors, plaster, epoxy. “I think the human body is the most amazing object in the world,” he says. “It contains an infinite number of thoughts and secrets and spaces.” At the centre of Studio A, a white plaster figure appears to scrape itself into shape by hands grown from the material, forming the body as if by its own intelligence. Altmejd calls it a “bodybuilder.”

“I’m not interested in work that needs to explain itself,” Andrea Rosen, his long-time dealer, says. That’s what attracted her to his art: she trusts it. Though his worlds are outlandish—a ragout of body parts, pineapples, and cold, minimalist structures—they have an interior logic. Like a fantasy novelist, Altmejd takes great pleasure in inventing the laws and axioms that govern his creations. When, for the first time, he made a bodybuilder from coloured epoxy, it felt like a new species. He wanted to play with that idea, so those sculptures, which he calls “the relatives,” now hang upside down from the ceiling.

In the corner of the largest studio room, Altmejd and his assistants have mocked up a 1:32-scale foam-board model of the Musée d’art contemporain exhibition space. Using scraps from around the shop, his team made miniatures—some with baffling fidelity—of the major works to be installed. Altmejd seems especially proud of a clear acrylic prism, smaller than a shoebox, isolated in one of the model’s rooms. The box is filled with figures and busts, some no bigger than apple seeds. “The Flux and the Puddle,” he says.

Robert Vifian—Parisian art collector, Flux curator, and chef-owner of oenophile bucket-list destination Tan Dinh—calls The Flux and the Puddle “the Mona Lisa of David’s career.” It’s a twenty-one-by-twenty-three-foot Plexiglas box filled with nesting, interlocking structures that stage characters and symbols from throughout his oeuvre: the heads, the werewolves, the mirrors, the synthetic flowers, the chains and threads, the bodybuilders, the fruit, all of it. The work, which Altmejd made last year, is a survey in itself—the world, or at least a slice of it, in a box.

“Amazing, isn’t it? ” he asks, marvelling at the maquette before him. In The Flux and the Puddle, he has distilled the bounty of life—not to mention his prolific output—into a single work. But there, in his hands, that whole universe has shrunk even smaller.