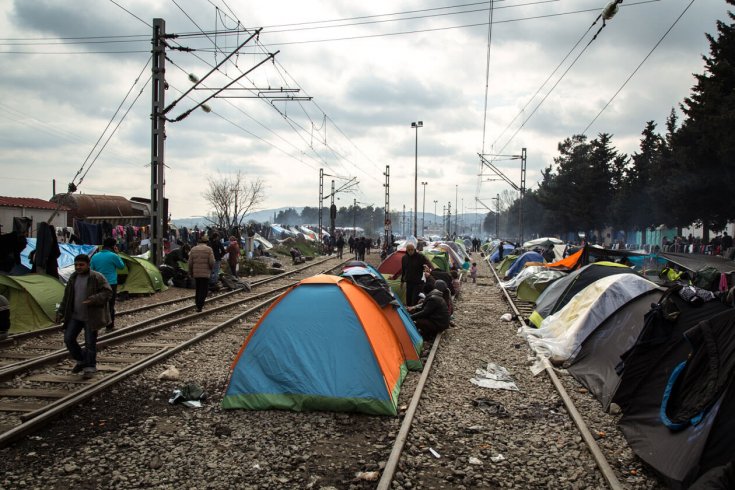 The Idomeni refugee camp in Greece.

Imagine waking in the middle of the night while camping and needing to use the bathroom. You open your tent to pouring rain, cold wind, and boggy grass. The revolting portable toilets, which you share with thousands of other campers, are at least 400 metres away. You have no umbrella, and all you have for your feet is a pair of beaten-up sneakers or Crocs, the same footwear you’ve been wearing for weeks now. And imagine you’ve been roughing it for a month, sharing your 2.5-metre-squared tent with three members of your family and all of your belongings.

Strip away any hope that you’ll ever see your home again, and you get some idea of the scene at the Idomeni refugee camp in Greece, where some 11,500 refugees—many of them Syrian and Iraqi—have become trapped en route to Western Europe. Nearly half of the camp’s occupants are children, according to the UN Refugee Agency. And like so many of the estimated one million Syrian children displaced by the country’s conflict, they are cold, hungry, and scared.

On March 9, neighbouring Macedonia—fearing a surge in migrant numbers arriving from Greece—closed its border, blocking refugees from moving further west into Europe. The decision formed a bottleneck in Northern Greece, with existing refugees unable to move on and new migrants arriving at a rate of a thousand a day. As the camp has grown in size, frustration has mounted, and skirmishes over food and clothing have become increasingly heated. Built around a train station of the same name, the town of Idomeni has a Greek population of just a few hundred, some of whom are themselves descendants of Turkish refugees. Standing on train tracks at the centre of the refugee camp, tents litter the horizon as far as the eye can see.

Government-provided coaches sit parked at the edge of the camp, ready to take people to Athens, Greece’s largest city, where they can be placed and processed in refugee centres. But for many at the camp, having fled Syria and survived near-fatal crossings of the Aegean Sea, settling down permanently in the fiscally ruined country is not an option. They want to move on, regardless of the risk. Earlier this month, three refugees drowned attempting to swim to Macedonia.

“They don’t want to stay in Greece, they want to go to Germany,” says Georgos Ajeilat, an aid worker for Praxis, a Greek NGO. Ajeilat has been working at the Idomeni camp since September. He says the camp’s inhabitants lack clean water, clothing, regular food, medicine, and electricity, and cases of dehydration and fever are on the rise. But for the moment, the concern is the weather. “We’ve had ten straight days of rain like this,” Ajeilat says.

When the rain ceases, the camp’s inhabitants start building makeshift fires to dry out their soggy clothes. Barbed wire at the Macedonian border acts as a clothesline and, with firewood soaked from the night before, people begin burning clothes, plastic bottles, furniture—whatever will take flame—in a bid to stay warm. The air fills with the acrid smell of burning plastic.

The situation is dire for all of the inhabitants, but especially for the overwhelming number of young people. Everywhere you look you find children, teenagers, and women carrying infants.

The Greek charity ARSIS (which works in Greece under the umbrella of Save the Children) is among the few youth-focused NGOs helping in Idomeni. “We’re mostly dealing with boys aged twelve to eighteen,” says Angelina Lykogianni, a volunteer who has worked with ARSIS since November. “Syrians and Iraqis mostly. A couple of months ago we had a lot of Moroccan and Iraqi boys, and a few Algerians.

“We have also quite a few cases of girls travelling alone,” she adds. “Women, young girls, and children are very vulnerable here.” In situations where their parents have been killed, she explains, girls without other family are forced into the dangerous position of having to negotiate with smugglers. With the border closed, workers are starting to see—and get to know—the same kids again and again. As one might imagine, the process of familiarization is taking its toll, making an already emotional situation more stressful for aid workers at the camp, Lykogianni says. “Everyone has broken into tears here at some point,” she says. Particularly taxing are the older boys, who can be more aggressive than the other children, and who find themselves frustrated with their situation.

At the ARSIS tent, “we just try to have fun and create a child-friendly space,” Lykogianni says, as a nearby volunteer leads a group of a dozen or so clapping children in reciting a Greek nursery rhyme. Beyond that, aiding mothers with young infants—with counselling and health care—is also a priority. Educational opportunities in the camp are limited. “We’ve tried to hold classes, but it’s really difficult because you need interpreters,” she says. Like most aid workers at the camp, she speaks Greek and English, but not Arabic, Kurdish, or Farsi. And her organization has just twenty translators in Idomeni.

She adds that as conditions have worsened, older children have started becoming more aggressive. “We have fifteen-year-old children who are coming to us after queueing two or three times a day just for a sandwich or a boiled egg,” she explains. “They can’t get enough clean water, they’ve been eating nothing but sandwiches.”

Politically, there have been hopeful signs. Earlier this month the EU struck a deal to send new migrants arriving in the Hellenic Republic back across the Aegean Sea to Turkey, in a bid to stem an increase to the 50,000 refugees already estimated to be in Greece. The deal appears to be having an effect: last Thursday Greece said no migrants had arrived on its shores in the past twenty-four hours. And this past weekend, eleven buses took some 600 refugees from Idomeni to other camps in Northern Greece, according to the UK’s Guardian newspaper.

But the majority of Idomeni’s inhabitants are determined to wait it out. They stage demonstrations, shouting and chanting at border guards to reopen the Macedonian gates. The most recent protest saw one man setting himself ablaze. At present, Greek authorities have no plans to move the refugees by force, citing a lack of resources.

And as the families wait, the children wait. Some sit dejected, in soaked clothes, staring vacantly and shivering by a fire. Others run around playing football or tag, waving and smiling and urging you to join in, as if nothing in their lives has changed. Even if these kids make it to Germany, they will find themselves impoverished, behind on their education, and in many cases dealing with considerable trauma.

Lykogianni senses that the camp’s residents are starting to lose hope. “They’re stuck in bloody mud,” she says.

Adam Benzine (@adambenzine) is a Toronto-based journalist and filmmaker. He directed the Oscar-nominated documentary Claude Lanzmann: Spectres of the Shoah.