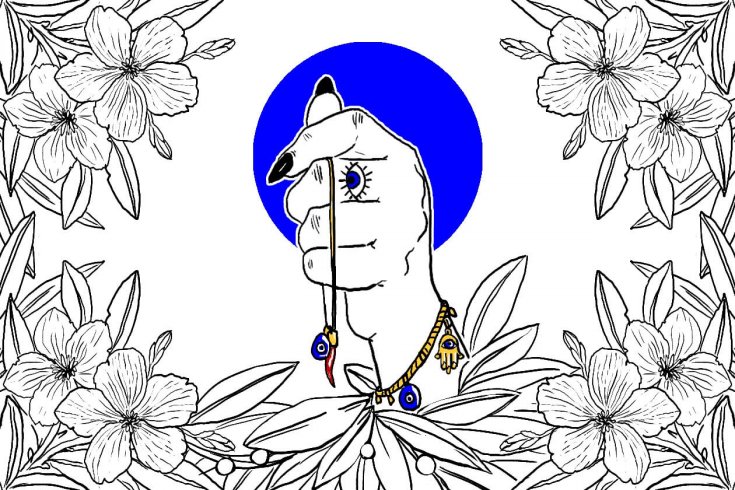 Last January, my older brother, Louie, came home early from work with a fever and stomach cramps. His face was tinged green, his gait sluggish as he reached for the bottle of Pepto-Bismol stashed away in our kitchen cupboard. The pink sludge did little for his stomach. Within hours, he was a classic norovirus case, slung over the toilet bowl in our basement. He tried it all—acetaminophen, flat Canada Dry, sips of Gatorade—to no avail. Noro, or the stomach flu, has no antidote. He’d have to let it pass with time.

But my grandparents had another idea. Both hail from the southern coastal region of Calabria, Italy, and now reside across from my childhood home in north Toronto. They phoned our house that day, worried when they’d noticed Louie’s car in the driveway. My nonni, as we call them, have always expressed their love in overprotection.

My grandparents deem any illness or discomfort a symptom of envy—a neighbour or colleague or acquaintance has wished them bad luck or, worse, cursed them. According to Nonna, malocchio, “the evil eye,” has been the culprit behind everything from everyday ailments such as headaches and nausea to my father’s more serious heart condition. Two summers ago, Nonna even blamed her wilting garden, usually a lush green space filled with homegrown vegetables, on malocchio from a jealous neighbour. So when she heard of Louie’s affliction, Nonna got to work.

She filled a pasta bowl with tap water and signed herself in the name of the Father, the Son, and the Holy Spirit. She grabbed her bottle of Unico olive oil—the same one she uses to fry up her family-famous fettina (chicken strips)—and poured a few drops into the water. She closed her eyes and repeated a prayer as the oil dispersed to the edges of the bowl. Twenty minutes later, she had an answer: Louie, by her discretion, was not sick with a virus but instead ailing from malocchio. She would continue to ward off the bad vibes throughout the day, performing the ritual every half-hour.

Most older generations of my family are true believers in malocchio. Growing up, the tradition of warding off the evil eye was as commonplace as saying grace before a meal or telling a story at bedtime. Throughout my father’s childhood, for instance, my grandmother’s healing ritual was the answer to every ailment. Brought up in homes where the only book was the Bible and where prayer trumped science, my dad’s side of the family never thought to question the validity of their ancestors’ evil-eye claims, even as they shifted into a world so predicated on modern medicine.

But my brother and I don’t seriously ascribe to Nonna’s do-it-yourself witchcraft—we know no virus can be cured by ritualistic prayer, nor can oil in water save her rotting cucumbers. Neither of us is religious. We grew up with the internet; we could Google any ailment within seconds. Our high-school science classes dispelled superstition. And yet for years, we have willingly asked her to “check us” when we feel unwell, a kind of ritual in our own right. Last week, I inquired about a headache after a stressful day at work; a few days ago, Louie called when his body felt stiff and sore. Our requests for help pay homage to our grandparents’ old-world beliefs, whether we believe them or not.

The concept of an evil eye, or a “malign glance,” as late University of California, Berkeley professor and folklorist Alan Dundes describes it in his book on the subject, dates back thousands of years. It’s mentioned in several verses of the Bible and in the works of Plato. In the seventeenth century, Francis Bacon’s Of Envy suggested that humans have a power that they “ejaculate” upon any object—or person—they behold, and that power can cause ill will.

Throughout history, cultures developed rituals to ward off the evil eye. They evolved to fit the times. In ancient Rome and Greece, phallic objects such as the Italian cornetto (a long horn) or the “fig” (a fist with a thumb thrust through the index and middle fingers) were used as amulets, in line with Bacon’s ejaculatory definitions of the evil eye. Meanwhile, in the East, similar traditions became commonplace. For those practising Islam, the phrase Masha’Allah (God has willed it) came to be a means to counter envious sentiments. In India, masons and carpenters began leaving smalls holes in buildings to allow the evil eye to escape from enclosed spaces.

When modern-day European and Asian emigrants headed to North America, so did the evil-eye tradition. For many, it was an effort to adapt to a new and strange homeland; the rituals associated with the evil eye, some scholars believe, were less about reprieve and more about preserving culture for newcomers in their Anglo-saturated homes.

For millennials living in a similar world of uncertainty and yet so disconnected from the past, celebrating the practice is about both. Guarding against the evil eye connects us to our families and where we’ve come from—and in the most tangible of ways. Every licensed grandchild in the Lenti family has a blue crystal eye sitting in their car’s glove box, a talisman to ward off evil. My good friend, a Persian woman, wears earrings bearing a hamsa—a hand with fingers spread open and an eye in the centre, denoting her culture’s version of the evil eye—to “protect” herself. Even my Jewish girlfriend, who finds my grandmother’s malocchio ritual ridiculous, wears an evil eye bracelet around her wrist every day.

At the same time, these symbols have been appropriated and commodified. Celebrities have increasingly sported versions of the evil eye. In 2012, paparazzi spotted Kim Kardashian wearing a silver evil-eye headpiece, designed by socialite Nicole Richie. At teen apparel shop Forever 21, evil-eye bracelets are easy to find. Urban Outfitters, meanwhile, stocks evil-eye phone cases, pillows, chokers. Online, Pinterest boards are filled with evil-eye tattoos, placed on the insides of wrists and tops of necks. In 2015, YouTube beauty guru Michelle Phan named the evil eye a fashion trend to follow. “Whether you’re warding off evil or just sending out good vibes with your symbol,” Phan wrote on her blog, “you’re making a statement and wearing a bit of history.” And this September, former boy bander Zayn Malik sported a blue-and-white evil-eye necklace in a new music video, much to the excitement of his teen fans.

For cynics, this millennial adaptation of the evil eye for the sake of trendiness makes a bleak case for preserving certain traditions rooted in superstition. But perhaps the shift is not in vain. Maybe we can view it as an expression of comfort in the face of uncertainty, for times when there is no simple answer rooted in logic, when pain and upset outweigh the desire for rationality. In these complicated, uncertain political and social climates, these charms can act as comfort. Certainly, an evil-eye necklace is not a cure for racism, sexism, bigotry, or violence. But it can be a tangible sign of resilience. At its core, belief—or at least the practice—of the evil eye is a traditional means of taking care, like a bowl of chicken noodle soup when you have the sniffles. We know it won’t cure us, but this is how we feel better.

My grandparents immigrated to Canada in 1958, arriving in Toronto with $20 lining their pockets, few job prospects, and no semblance of the English language. There was little keeping them afloat but the community built among other Italians. Nonna’s sister-in-law taught her how to perform the malocchio ritual while my grandmother was in her thirties. According to community lore, malocchio healers can only learn the prayer and accompanying oil-in-water tradition at midnight on Christmas Eve, a supposedly sacred passing-on from one moment in time to the next.

For years, Nonna begged to pass the torch to Louie and me. Neither of us had any real interest in performing the ritual for anyone else, but Louie, the oldest grandchild, took the bait to make Nonna happy. A decade later, he’s never practised the tradition himself, opting for Nonna’s handiwork instead—perhaps, when she is gone someday, Louie will resurrect the practice, to keep it alive for generations to come.

Nonna is the oldest living relative left on her side of the family, a mere four-foot-ten with permed hair and fingers wrinkled from years of cooking and cleaning and working Toronto’s factory lines. She is my last connection to the early days on the southern shore of Calabria, to fresh tomatoes boiled and crushed into Mason jars on warm summer mornings—and to the spiritual, albeit fanciful, ritual of oil and water intended to heal. I know there is little to see where she is from, a farm with goats that ate cigarette butts, where asking for Wi-Fi will warrant a Ma che cazzo? (What in God’s name are you on about?) from locals. I’ve never been, and it’s unlikely I will ever see where Nonna grew up. The place itself holds less significance than the traditions she brought from it.

Instead, Nonna’s malocchio ritual will always be a practice we share together, in her new home in Canada, six decades after she first arrived here. And there’s joy for us in this simplistic mode of taking care. It insists that we strip away complex understandings of the body and mind—and, yes, even our society—and find peace in basic terms: a crystal amulet shaped like an eye, oil in water, a prayer repeated like a chant.

Even though I know the history, and have the culture, I understand that I’m no different than the trendsetting millennials who don fashionable evil-eye bracelets; we seek the same solace. We take what has been handed down to us and have turned it into our own: when we’re sick, we need optimism that it will end soon. In the same way, when we watch the news, or browse Reddit, or read the New York Times, and see destruction and devastation in our society, we want consolation. We don’t expect real solutions from a superstitious practice, of course. But to keep things simple can provide easy comfort, a placebo in our times of need.

It took Louie a week before he could eat his first solid meal. After, he phoned my grandparents. He was much better, and Nonna could stop checking on him, he said. She obliged, grateful that he relied on her for comfort during his sick week. We both knew it wouldn’t be his last call.

Erica is a senior editor at Xtra Magazine
Amrit Brar

Amrit Brar is an illustrator and zinester based out of Brampton and Toronto, Ontario. She commonly publishes zines under the moniker Musterni.