How to Pitch a Tent | The Walrus
Skip to content 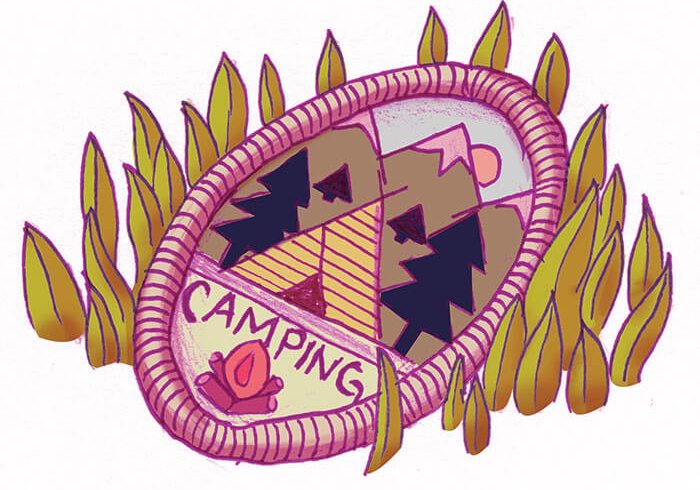 A dozen immigrants sit in a classroom. The walls are plastered with world maps, desks are stacked with maple cookies, and a table is piled high with tarps and sleeping bags. They’ve come to learn about the venerable Canadian practice of sleeping under the stars, also known as camping. The workshop is a Parks Canada initiative, started in 2011, meant to ease newcomers into the wild. This session, held last year inside an Edmonton Catholic Social Services office, is one of the agency’s biggest yet: forty-seven people from three continents have committed to spending the September long weekend surrounded by Jasper National Park’s mountains, lakes, and glaciers, and a quarter of them have shown up to this pre-trip primer.

“Can anyone translate Arabic?” asks settlement-orientation coordinator Frank Bessai, attempting a to conduct a roll call over an eight-language cacophony.

Hanan Omar, a young Somali woman clad in black from head scarf to sneakers, eagerly raises her hand. Balqees, an Iraqi mother with adult children, and Mohammad, a Syrian father of seven, slide their chairs close to hers. Bessai sets up one translation network between them and another between Kirundi speakers, and places himself between those who speak Russian. He gives the floor to park interpreter Kevin Gedling. “What is a national park?” Gedling asks, slowly enunciating every word. “It’s an example of a special place in Canada. Our job at Parks Canada is to protect national parks and to show national parks to people who live in Canada and around the world. And that includes you.”

That’s the pitch, but it’s not the whole story. Since 2001, national parks visits have stalled at around twelve million, down from sixteen million the year before. As a result, the federal agency has begun to focus on attracting young people, urban dwellers, and newcomers to Canada. For the first two target demos, Wi-Fi hotspots have been added to some parks, and so have powered, heated, A-frame cabins; for the third, there’s Learn to Camp.

Nearly half of Learn to Camp’s 1,800 annual participants come because they’ve been told that camping is fun, according to Parks surveys. A fifth attend because they’ve heard camping is a core Canadian tradition, as much a part of our identity as hockey and politeness. But many immigrants to the country make their homes in urban spaces and seldom get out to see the remote wilderness by which Canada defines itself internationally. So for Parks, the message can’t just be that camping is Canadian—it must also be that camping is easy.

For families such as Omar’s, any cost is a barrier. The Omars are refugees from Somalia. When her father was killed in 2006, Hanan, along with her mother and five younger siblings, fled to Syria. Five years later, it, too, was embroiled in civil war. Last July, they took sponsorship in Edmonton. Her younger brothers and sisters are now going to school, and Hanan, a twenty-year-old aspiring nurse, is upgrading her education. Gedling says it could be ten years before families such as theirs are able to afford another trip into the mountains like the one they’re about to take.

Though campers often leave the parks feeling inspired, getting them there is a challenge. For example, there are the language barrier and the fear of exotic wildlife—especially bears. (“It’s illegal to hurt the animals,” Gedling tells a teenage boy who requests a knife for self-defence.)

Many participants have camped, just never for fun, so understanding that concept is also an obstacle. “If you tell a bunch of people from central Africa that we’re going to walk up that mountain, they’re going to say, why?” Bessai says. “‘Is there something we need? Is there firewood up there?’ You don’t just walk up mountains to enjoy the nature and recreational experience.” The idea of sleeping in tents for pleasure rather than necessity is especially confounding—and that’s what loses Balqees, the Iraqi refugee who had planned to bring her son and daughter on the trip. Staring at a photo of a family bundled up in a tent, she yelps, “Shukran jazeelan!”—a sarcastic thanks but no thanks.

Gedling’s opening definition of a national park may have been too broad. “So,” he backtracks, “camping means to sleep outside.”

Omar translates this for the Arabic-speaking attendees, but it only confuses them further. She tries to explain that sleeping in the wilderness is something Canadians actually enjoy.

By the time Gedling unrolls the mustard-coloured six-person tent to demonstrate how to pitch it, Balqees has left. She and her children will also be no-shows for the trip on Friday morning. Meanwhile, Omar jumps into action, threading a tent pole through its loops with a grin.

After returning from their weekend in Jasper, she’s hooked. Despite the frigid, rainy weather and a few encounters with aggressive elk in the midst of mating season, it was the first true family outing she could remember taking. “We don’t have fun like that before in ten years,” Omar says. She learned how to cut wood, start a fire, and put up a tent. She saw countless animals and sang campfire songs.

The only thing missing? “I want to see bears.” Next time, she hopes.

Jessica Fortner (@JesFortner) has done work for the New York Times, the Harvard Business Review, and The New Republic.