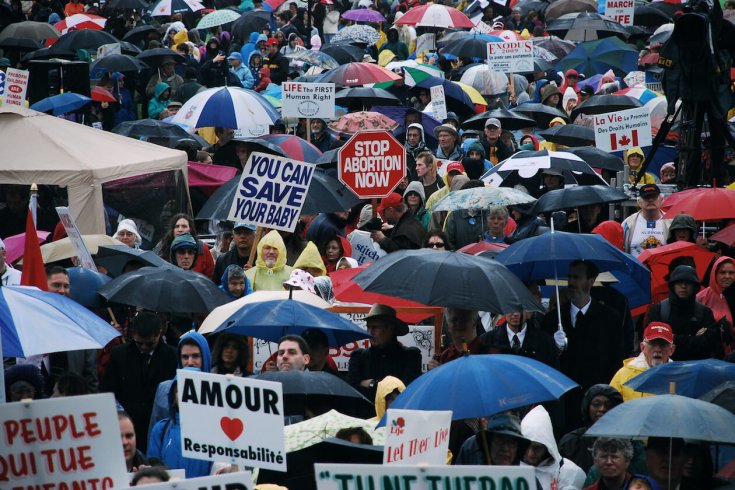 This weekend’s contest for leadership of the Conservative Party of Canada seemed to stun the usual experts, who were incredulous at the success of candidates who not only oppose abortion, but also same-sex marriage and trans rights. I wasn’t.

The Christian conservative movement is more influential than we might think and had urged its followers to support Brad Trost, Pierre Lemieux, or Andrew Scheer. The first two men hold hardline positions on social issues, with Trost, according to his campaign manager, being “not entirely comfortable with the whole gay thing.” While he appears less strident in his approach, thirty-eight-year-old Scheer is an observant Roman Catholic, and, as an elected member of parliament for over a decade, the father of five has consistently voted in favour of pro-life motions and bills. He is also, of course, the new leader of the opposition. Social conservatives in the party and caucus are ecstatic.

How do we explain all of this? Most sensible and informed people in Canada believe in a woman’s right to control her own body and reproduction, and even those who may have some moral reservations about abortion accept the legal and political status quo. In other words, the argument is over. There has always been a fringe of hardline opponents of abortion, but their voices have been irrelevant, eccentric, and mostly ignored. Today, however, a new generation of zealots has emerged. They’re now hysterical rather than eccentric and, while hardly within the mainstream, have managed to exert an outsized influence on politics, religion, and society.

Members of this movement are usually Roman Catholic or from one of the various Dutch Calvinist churches; they are generally young, often with a home-schooled or private Christian education background; they are politically right wing on a number of causes; and they have jettisoned the moderation of some of their elders, and also learned lessons from “pro-lifers” south of the border.

One of their major portals is Lifesite, the most influential anti-abortion media platform in Canada and one of the more significant in the English-speaking world. It recently ran a long movie review, headlined, “Alien movie seemed like a lot of fun until I found Satan was behind the script.” Who knew? But the absurdity aside, this site matters and people read it. And beyond the issue of abortion, its writers frequently discuss the alleged evils of pornography and seem morbidly obsessed with homosexuality. Lifesite and its various satellite blogs and platforms also warn about how liberal elites are destroying our way of life, about the dangers of the trans community, and about how Pope Francis is betraying the church on divorce and sex.

So the essence is that the problems of the world consist largely of gays, dirty pictures, Justin Trudeau, the Vatican’s slide into liberalism, sex, Satan, condoms, and the war on the family and the unborn. Not necessarily in that order. More worryingly, homophobia now saturates the movement. Lifesite has even started to publish columns by Peter LaBarbera, founder of Americans for Truth about Homosexuality, a group “dedicated to exposing the homosexual activist agenda.” LaBarbera was detained at Regina Airport in 2014 because he was due to speak at an event where, according to customs officials, he could break the law with “wilful incitement of hatred.” He was eventually allowed into Canada but was arrested a few days later for refusing to leave university property, where he was distributing pamphlets describing the “evils” of homosexuality.

Abortion, of course, is their great galvanizing cause. Individual activists routinely refer to the act as murder, compare it to the Holocaust, and ostentatiously display graphic post-surgery pictures in public. During the last federal election, people across Canada complained that flyers had been put through their doors that depicted deeply bloody and graphic images of mangled fetal body parts. Sometimes children would see them before their parents and were deeply upset. That, responded the young pioneers, was the entire point. It was part of a campaign labeled No2Trudeau, organized by a well-financed anti-abortion group called The Canadian Centre for Bio-Ethical Reforms, who claimed to have distributed more than a million of the leaflets.

If you assume that this is merely the sewers breathing and that the Conservative Party leadership vote was an aberration, witness what happened to the Ontario’s sex education program. While it’s now being implemented, it was put on hold under former Premier Dalton McGuinty largely because of a campaign by the Christian right that argued the curriculum encouraged child sex and was written by pedophiles. They mobilized their people to send e-mails, assemble for demonstrations, and to apply pressure on MPPs. McGuinty came to believe that their wild accusations were damaging his image and that the cause was more trouble than it was worth.

The anti-abortion movement then tried extremely hard to influence the Ontario Conservative leadership election, initially backing Monte McNaughton but throwing their support behind Patrick Brown when he initially promised to challenge the Liberals’ sex education approach and made it seem that he was the only viable choice for the pro-life movement. It worked. They voted for him. But Brown is not, at heart, a social conservative, and abandoned his new friends within a few months of winning the leadership. They now refer to him as a “shape-shifting weasel,” and while Brown and his people show public indifference, its hard not to be struck by the influence of the social conservative right and what this might mean during a general election.

As a reminder, recall that last year, in the same province, nineteen-year-old Sam Oosterhoff was elected a member of the provincial legislature. He is home-schooled, is still a university student, has very limited life experience, is part of an intensely strict church and, naturally, opposes abortion. His initial winning of the Tory nomination shocked the party hierarchy and was a tribute to the propaganda and organizing skills of social conservatives. As one Tory mandarin had it, “This just wasn’t supposed to bloody happen.” They’d underestimated how many votes the Christian right could muster and how dedicated their followers were. And let’s not forget that while the movement is led and organised by white Christians, it has also mobilized many Muslims, Chinese Christians, and right-wing Sikhs. Those are increasingly important factors in Canadian electoral politics.

While the anti-abortion movement no doubt sees Scheer’s ascension as the sign of more victories to come, no sensible observer believes that the national policy on choice and reproduction will be transformed. Long-term research has shown that abortion rates fall when contraceptives are easily accessible, when children have a good, modern, and relevant sex education, when women have equal power and control.

Those facts doesn’t matter to the new puritans. It’s the struggle rather than the result that defines them. They don’t seem to genuinely want to reduce abortions and every defeat is seen as another sign that the righteous and the chosen have to suffer when they pursue the Lord’s work. They also know that along with those defeats come occasional victories and, more significantly, a continuing influence.