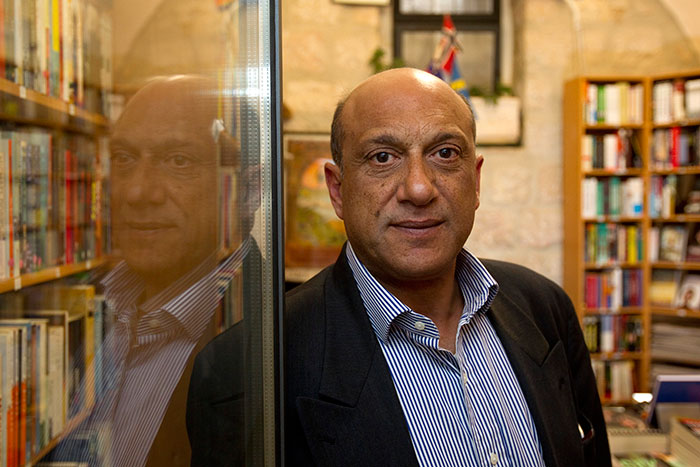 A few blocks from the Old City of Jerusalem, arguably the most contested ground on earth, stands the American Colony Hotel, where foreign nationals mingle in the jasmine-scented gardens, drinking competently mixed manhattans. Many will find their way to the legendary hotel’s English-language bookshop. At the back of the narrow, vaulted room, the bookseller sits at his desk, pencil in mouth, going through sale inventory.

Munther Fahmi is well dressed, in polished shoes and a tailored shirt rakishly open at the collar, but his weakness is books, and he is always trying to make room for new stock. When asked for a few primers on the Arab-Israeli conflict, he appears exasperated for a moment, looking around the cavernous space, books piled upon books, then offers a short list: The Iron Wall, in which Avi Shlaim documents Israel’s costly emphasis on security at the expense of peacemaking efforts; and Raja Shehadeh’s Palestinian Walks, which describes the devastation of the West Bank landscape under occupation.

This Land Is My Land

A short history of a city in two provinces 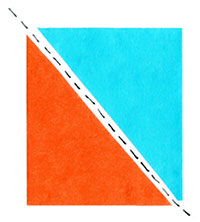 Lloydminster, one of two Canadian cities with bi-provincial status, straddles the border of Saskatchewan and Alberta, on a narrow strip of land bisected by Yellowhead Highway 16, part of the Trans-Canada Highway. It was settled by 2,600 British colonists who followed the charismatic reverends Isaac Barr and George Lloyd to the heart of western Canada in the early 1900s, enticed by cheap farmland and promises that a CN railroad would soon run through it. In 1905, the provinces of Saskatchewan and Alberta were created, and the new boundary between them split the village in half. For a generation or so, the 500-odd inhabitants of Lloydminster lived with two municipal councils, two town halls, and even two fire departments. After a fire swallowed the community, leaving only the lumberyard and a few buildings intact, municipal services were finally amalgamated in 1930.

“I’m trying to get the Palestinian view across,” Fahmi explains, sipping Turkish coffee from an elegant cup. “I think of the 1948 war as a public relations campaign that we lost miserably.” A Palestinian born in East Jerusalem, he found his vocation when he fell in love with a Jewish bibliophile. Struck by the absence of “good, serious works” at the book fairs he and his then girlfriend frequented, Fahmi decided he could do better. He set up a booth at an event sponsored by a right-wing Zionist organization in Tel Aviv, and lasted three days. He found a more receptive clientele at the Colony, and amassed a collection that reflects the full complexity of Arab-Israeli strife in a polarized place.

“Attitudes here are hardening, not softening,” says David Viveash, director of the Carter Center in Ramallah and former Canadian representative to the Palestinian Authority. “To the extent that a shop like Munther’s can help people understand the perspective of ‘the other,’ that’s constructive.” Fahmi has a devoted following of high-profile diplomats, among them Jimmy Carter and EU foreign policy chief Catherine Ashton. Nir Hasson, a columnist with the Israeli daily Haaretz, ventures that Fahmi has “influence on the discourse.” Hasson’s colleague Akiva Eldar expands: “He knows the ambassadors, he knows the journalists, he knows the right people.”

As a native in occupied territory, Fahmi has mutually benefited from these relationships. Following the Six Day War in 1967, he and his family were relegated to permanent residency status. When he returned to Jerusalem in 1993, after a lengthy period living in the US, he discovered his status had been revoked. “I was forced to be a tourist in my country of birth,” he explains. In 2009, the authorities stopped renewing his temporary visa, and he faced deportation.

He both lodged an official appeal and turned to his clientele for public support. His case was reported in The New Yorker, as well as The Economist, the Guardian, Bloomberg, and others; an online petition to Israel’s interior ministry attracted over 3,000 signatures, including notable authors Ian McEwan, Roddy Doyle, David Grossman, and Amos Oz. Fahmi’s appeal was denied by the Israeli Supreme Court, but in January the government granted him a two-year reprieve, to be followed by permanent residency pending good behaviour.

Late in the afternoon, he is still at his desk when several journalists, fresh from viewing Sweden’s northern lights, stop in to thank him for a recent book recommendation. He smiles graciously and spends a few moments exchanging travel stories (that time he bumped into a Palestinian rap ensemble in the Swedish countryside!), before they return to browsing the small bookshop filled with big ideas. Fahmi doesn’t appear worried about its fate, despite his own precarious position. If he doesn’t secure his residency, he now has a backup plan: “I’ll just marry my Jewish girlfriend.”

Sarah Treleaven is a freelance journalist.