We trace our sticks on the ice, carving designs in the shavings. Some of us go barefoot in our skates to better feel the rink. We shift, restless and bored. We’re awkward—rangy girls abutting adulthood—but behind our face masks our eyes are cold. When the drill finally starts, we weave around one another with the ease that only girls who play together, get changed together, can have. We bang our sticks on the ice, howling. Egg beater, ring flipper, stick stinger, shit whipper. Go, girl, go.

This is ringette. In 1963, a man named Sam Jacks realized that girls were made for a sport faster than hockey, a sport that didn’t involve smearing an opponent’s head along the boards. Created in North Bay, Ontario, with the first game played in nearby Espanola, ringette quickly grew in popularity. Associations were first formed in North Bay and Sudbury in 1966, and the sport expanded across the country throughout the ’70s. After a period of decline, caused in part by the rise of women’s hockey, ringette now appears to be making a comeback, as former players introduce it to a new generation of girls. It is played in all ten provinces, as well as Northwest Territories, and there are leagues in Finland and Sweden.

Played on ice, in equipment similar to hockey, ringette might look odd to an uninitiated observer. Instead of the curved blade of a hockey stick, players use a straight shaft; instead of a black puck, there’s a blue ring. The rules are different, too: Players must pass over every blue line; icing and offside don’t exist; faceoffs are replaced with a free pass from the circles; there’s no entering the goalie’s crease. It’s strictly no contact—no bodychecking, no roughing, and absolutely no fights.

Ringette is not hockey. It’s full of whippier efficiency and more fluid play. The players even skate in a specific manner, churning their hips and arms from front to back instead of side to side. To this day, I can identify a ringette veteran from her on-ice stride. Former teammates, now retired, probably still move the way I do whenever they lace up. We’ll always hold that motion in our hips.

I grew up in Ontario, and started playing ringette when I was seven. My first home league, in Etobicoke, was a mess. Our team played at a rotting arena in a rough part of town. Our ice was soft, our Zamboni slow. The rep team, which I joined at the age of twelve, was stretched so thin that when a carload of players was late for a game, the rest of us had to skate without any bench time—and we still won, almost every time. We played the way a ragged team has to play: ugly, mean, well. I skated alongside bullies, fourteen-year-old mothers, girls who kicked you in the stomach in the dressing room if you got a play wrong. Team sports bring out ferocity in anybody, especially girls trying to fit their growing breasts under shoulder pads. Even with the no-contact rule, we found ways to unleash our aggression—elbows delivered to opponents’ bellies, insults whispered sinisterly from behind a face mask. Maybe it’s not that Jacks thought girls were too delicate for a contact sport; maybe, instead, he knew the damage we could inflict no matter what.

But there was always beauty in playing, some new lesson gleaned from every weekend tournament and every loss. I learned that whatever I was feeling—hormones, heartache—someone else in the change room was going through the same thing. I became familiar with small, out-of-the-way places in Ontario—Stayner, Jordan, Tillsonburg, Gananoque. And I learned to be hard and brave. Hockey was prime rib, so we settled for second-rate practice times, played games on Saturday nights. We weathered pubescent male stares as we waited for hockey players to get the hell off the ice. To them we looked like easy targets, but really we were the most feral rink rats of all, because we had nothing to lose.

When Etobicoke could no longer offer me the opportunities I wanted, I went to Mississauga, eventually playing at the provincial level. At one point, I considered trying out for the national team. My ringette career ended at age seventeen, however, when I couldn’t balance high school and ice time. Although I haven’t played in more than a decade, I still carry one defining lesson with me: girls can function beautifully as a unit. Every team I played on eventually reached the point where we could predict one another’s passes—from behind, the side, under the thigh—without looking back; the point where we could skate backward in tandem with our sticks outstretched, voices mad and raised. Go, girl, go.

Anna Maxymiw has contributed to the Globe and Mail, Maisonneuve, and The Malahat Review.
Nolan Pelletier

Nolan Pelletier does artwork for The New Yorker, the Globe and Mail, and the New York Times.

How the Anti-Vax Movement Harms Us All

Down and Out in Camelot 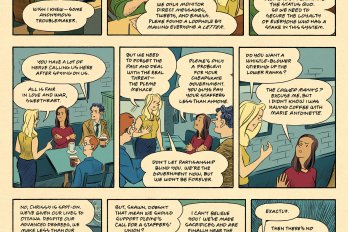