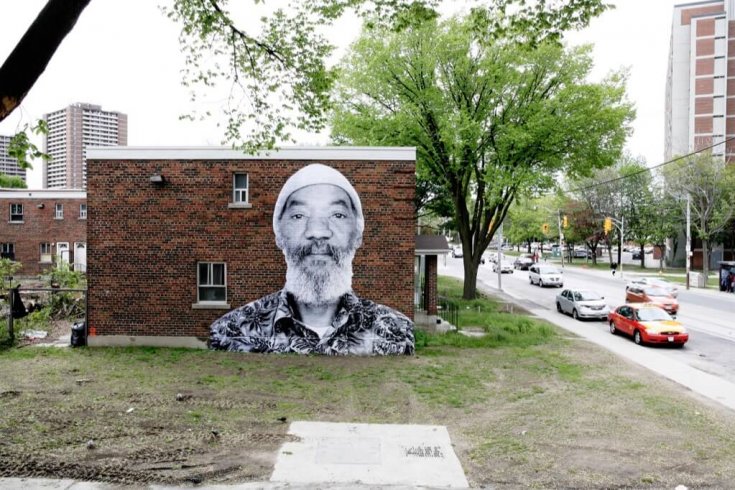 Image by Dan Bergeron, from the Regent Park Portrait Project, 2008

Jason Ramsay poses this question one afternoon in Toronto as he takes me on a tour of the rough and dreary community known as Regent Park. He gestures about at the scant trees, the identical brick buildings with smeared windows, the cracked sidewalks and drifts of litter. Passing a drained concrete pool with a smokestack for a backdrop, the psychologist, who has been treating residents here twice a week for the past year, offers up a quote from writer Alain de Botton: “In a wasteland of rundown tower blocks, our optimism and sense of purpose are liable to drain away, like water from a punctured container.”

Would you treat the downcast denizens of such a neighbourhood with a pill, as if what they felt were purely biological? Would you have them stretch out on a couch and probe at childhoods they’d rather forget? Leave them to their long-accustomed strategies of self-medication with street drugs? Or would you try, as Ramsay and his colleagues at St. Michael’s Hospital have been doing, to provide pragmatic, goal-oriented counselling that takes account of their predicament, in the guise of cognitive behavioural therapy?

The theory behind cbt is that we carry around untested assumptions about ourselves that govern how we act and feel (for example, “I believe I am a failure, and therefore if I don’t get a job, that just proves my belief, and I will avoid or sabotage subsequent job interviews, which in turn will sustain my desultory mood”). Psychoanalysis posits essentially the same thing, but the cognitive and behavioural theorists who have been evolving the treatment since the 1980s don’t concern themselves with why we have these assumptions so much as how to loosen their grip on us.

For years, Toronto’s Regent Park was a slum, a place where children played in dirty alleys and risked death on narrow streets. Replacing slums with modern housing costs money, but so do the crime and disease which breed in slums. The old, squalid houses were being torn down; new buildings began to rise in place of the old slums. Thrifty Toronto expects Regent Park to pay up in hard cash saved—and better citizens.

It seemed they would never have anything better, would never have warmth, and light and comfort, and an end to grubby backyards and dirty alleys. And then something happened in Regent Park. The citizens of Toronto had embarked on a pioneer project, first in Canada, a daring experiment that may serve as a model for cities from coast to coast.

Over the course of twelve weekly sessions, give or take, clients are taught to identify self-defeating “hot thoughts” that arise outside the treatment room, and compile lists of evidence both for and against them (“My wife told me I was a failure, but I wasn’t the only one who didn’t get the job, and they couldn’t all have been failures”). By formulating more balanced thoughts based on such assessments, clients are able to make themselves feel better and engage with the world more productively. A significant body of evidence suggests that CBT is the most effective treatment for a variety of mood disorders, with relapse rates in some cases much lower than those associated with drug therapy. Yet it is rarely offered to the poor.

“I think there’s an idea out there that people who are marginalized, who have low literacy, are not suitable for CBT,” says Ramsay. His colleague Dr. Leah Steele has research to show that well-educated, relatively wealthy females are by far the most likely Canadians to be referred to mental health specialists. The implication is that they are thought to have the time and the verbal acuity to engage in talk therapy.

Compounding this referral bias is the sheer lack of mental health care professionals who are both covered by public health insurance and trained in the approach. It is easier to get a cab in Times Square on New Year’s Eve than to secure a timely appointment for CBT. Year-long waiting lists are common for the entitled middle class, never mind the destitute.

Thus it was that Ramsay—young, robust, and boundlessly enthusiastic—decided to hang out his shingle at Regent Park Community Health Centre, waiting in a borrowed exam room for referrals from the regular staff. “My first clients were Muslim guys,” he says. “It was interesting, because I would have thought they wouldn’t come for therapy.” (His own bias showing through?) “But in fact they were quite open, perhaps because they’re from a collectivist culture where if you need help you ask for it.”

Some of his clients suffer with chronic pain from job- or substance abuse–related injuries. Others are dealing with housing issues, or are making the transition to life in Canada, or have just come off the street, or escaped domestic violence and don’t know how to adjust—how to surmount their sense of “learned helplessness.” Often they start off taking Ramsay’s suggestions as orders, and skip sessions if they haven’t done the homework, because they’re afraid to get in trouble. His task is to challenge their expectations about him (they call him Doc), and about themselves. “I tell them, ‘Wow, you’re so resilient. I couldn’t have survived these challenges. You have skills.’”

It is critically important for them to engage in this task, precisely because they need twice as much drive merely to overcome their daily predicaments. “These neighbourhoods are like crab buckets,” Ramsay argues. “As soon as you start climbing out, there are five situations, or five social determinants, pulling you back.”

Having now worked with some two dozen patients, the team at St. Mike’s is set to measure the outcomes of their interventions. If the evidence supports continued funding, they hope to expand the program and perhaps even their measurement parameters. Does CBT help the citizens of Regent Park surmount the most pressing obstacles in their lives? Does it help them, for example, gain employment? Or escape neighbourhoods like Regent Park? “The typical aim of therapy is reduction in symptoms,” Ramsay says, “but why can’t we have these more concrete goals? I’m totally down with that.”

Patricia Pearson is the author of eight books, including Opening Heaven's Door: What the Dying May Be Trying to Tell Us about Where They're Going and A Brief History of Anxiety (Yours and Mine).