Rev. Brent Hawkes officiated Canada’s first legal gay weddings by publishing banns beforehand, according to ancient Christian tradition. In this adapted excerpt from his August 22, 2003, affidavit to the Supreme Court of Canada, he considers the accommodations a pluralistic society must make for people of all faiths.

There are many reasons why we decided to bring legal action to change the law of marriage in Ontario. Marriage is an important Christian rite of great antiquity. I have attended and presided at many heterosexual weddings. It has struck me as ironic that one of the frequently read passages at such weddings is the Song of Ruth, a confession of love and devotion from one woman to another that some believe evidences a same sex union.

In the summer of 2000, I had brought to my attention section 5 of the Marriage Act of Ontario. I learned that through publication of banns we might marry same sex couples legally without the obstacle of a municipal clerk who was uncertain about issuing a license. I took this matter to our Board, and they agreed to institute this procedure and to offer marriage by banns to same sex couples.

The man behind the ring finger 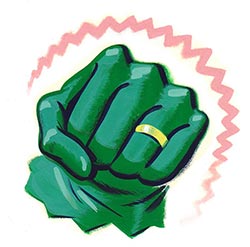 Best known to trust lawyers as the author of A Treatise of Testaments and Last Wills, Henry Swinburne published a book on matrimonial contracts in 1686. Besides finessing the language of the contract, the ecclesiastical lawyer ventured outside his area of expertise, suggesting that brides and grooms should wear their rings on the third finger because of a vein that carried blood directly from the hand to the heart. A ring encircling the vena amoris, or “love’s vein,” would therefore symbolize their affection and commitment. Swinburne traced the custom of wearing rings back to Prometheus, but was presumably not so familiar with the myth: the band worn by the Titan was fashioned from the chain that once bound him to a mountain (a fragment of which was set in the ring), where an eagle pecked out his liver.

We began with the publication of banns for two couples, Kevin Bourassa and Joe Varnell, and Elaine and Anne Vautour, on Sunday, December 10, 2000, International Human Rights Day. The form of banns was based on the one used by the Anglican Church. The banns were published on the two following Sundays, and no objections were made that I believed to be a valid impediment to the proposed marriages. However, the process required that we not only allowed the voices of our opponents to be heard, they had to be heard in our own sanctuary. Among others, a Catholic friar and Rev. Ken Campbell, perhaps Canada’s most notorious Christian anti-gay, stood up and gave vent to their views as part of this process. Enduring this anti-gay vituperation in our own sanctuary was very distressing to our congregation.

On January 14, 2001, the couples were wed in a beautiful and spiritual ceremony that took place in a packed sanctuary. The reaction from our congregation to this development has been joyful and universally positive.

In a pluralistic society, people of faith must make accommodations every day. Traditional Catholics must live with the availability of abortion and divorce for those who do not share their beliefs. Fundamentalist Muslims must live with the fact that Shari’ah is not the law of the land, so that polygamy is not possible and homosexuals are not outlawed. Orthodox Jews must live with the fact that non-kosher food is sold and consumed every day all around them. Old Order Mennonites may drive horse-drawn buggies, but they must share the road with others driving cars. Even fundamentalist Protestants have had to accommodate themselves to people working on Sundays.

On June 10, 2003, the Court of Appeal released its ruling. In a more detailed analysis, it confirmed that freedom of religion was unaffected by the old common law rule. However, it found in our favour on the grounds of sexual orientation discrimination. The Court granted immediate relief, and gave legal recognition to the 2001 marriages. The marriages of Kevin and Joe and Elaine and Anne have been registered with the Province, and we continue to submit registration documents for couples married at MCCT [Metropolitan Community Church of Toronto].

Since the ruling, MCCT has received hundreds of calls from people around the world seeking to come to Ontario to be married. Several of these couples have obtained marriage licences and have traveled to Ontario to be married. Thanks to the Court of Appeal ruling, the founder and moderator of our denomination, Rev. Troy Perry of Los Angeles, California, was married by me to his long-time partner, Phillip De Blieck, at MCCT on July 16, 2003. I personally found the event to be very moving, as did all those who were present. Rev. Perry expressed his joy and gratitude at being able to legally marry by exclaiming at the end of the ceremony, “Thank God for Canada!” He expressed his intention of returning to the United States to carry on the struggle for equality there and around the world. Many in our congregation told me after the ceremony that they could not have been more proud to be Canadian on that day.