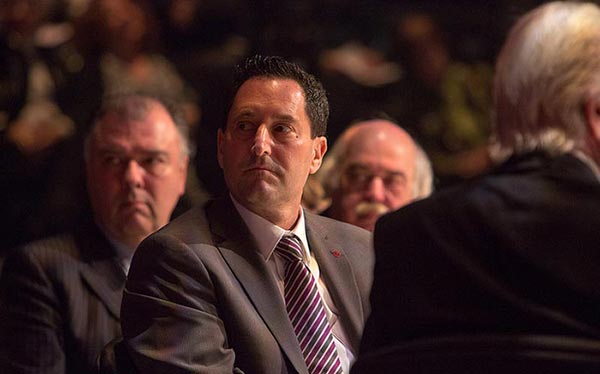 Call it the political perp walk—something that we in Quebec have sadly become accustomed to. Early this morning, Montreal’s interim mayor, Michael
Applebaum, was arrested at his home and charged with fourteen criminal counts that range from breach of trust to fraud. And to think, this is the leader who was supposed to steer the city right—after graft, corruption, and blind complaisance prompted the previous administration’s ignominious fall.

Plus ça change, as the saying goes. Or, shameful is as shameful does. You’d think that by now, Montrealers would simply shrug our shoulders and get on with our day. It’s just another allegedly corrupt politician. Or, to be more precise, two, given that Saulie Zajdel, another former municipal pol, was also arrested as part of today’s mini-sweep by UPAC, the province’s anti-corruption squad.

However, setting aside the tenet that Applebaum is innocent until proven guilty, the very fact of his arrest is the biggest betrayal of all—bigger, even, than former Laval mayor Gilles Vaillancourt’s, because Applebaum took on the city’s top job for the specific purpose of setting it straight. He was the Anglophone choirboy, the man with a plan, the politician who was outraged at what had been happening here for years, while his former boss, ex-mayor Gérald Tremblay, hid his head in the (below-par) sand and asphalt.

Sure, there were questions about shady transaction deals carried out under Applebaum’s leadership of Côte des Neiges-Notre Dame de Grâce, the west-end borough in which he lives. He got mad and blamed a smear campaign. And when there were stories about him attending a fundraiser at a known Mafia restaurant, and that he was involved in government grants given to Tony Magi, a real estate developer with links to the Rizzuto crime family, Applebaum was apoplectic.

“I have never given favours to anybody, never received funds, never gone on any boat trips,” he told a news conference at the time. “I am not afraid of the Mafia, I do not hang out with the Mafia, and I do not know members of the Mafia. They are not friends of mine.”

Maybe not. But the fact is, investigators for UPAC do not make arrests lightly. The charges are related to two real estate deals in Applebaum’s borough; according to police, they involve bribes worth tens of thousands of dollars.

Now, five months before Montreal’s next municipal election, there is a dearth of serious candidates who can set a fire under voters. As La Presse columnist Vincent Marissal already wrote today, we have no one with a concrete plan to heal the city.

And that’s the most depressing problem of all.

Lisa Fitterman is based in Montreal. Her work has appeared in newspapers and magazines across the country.